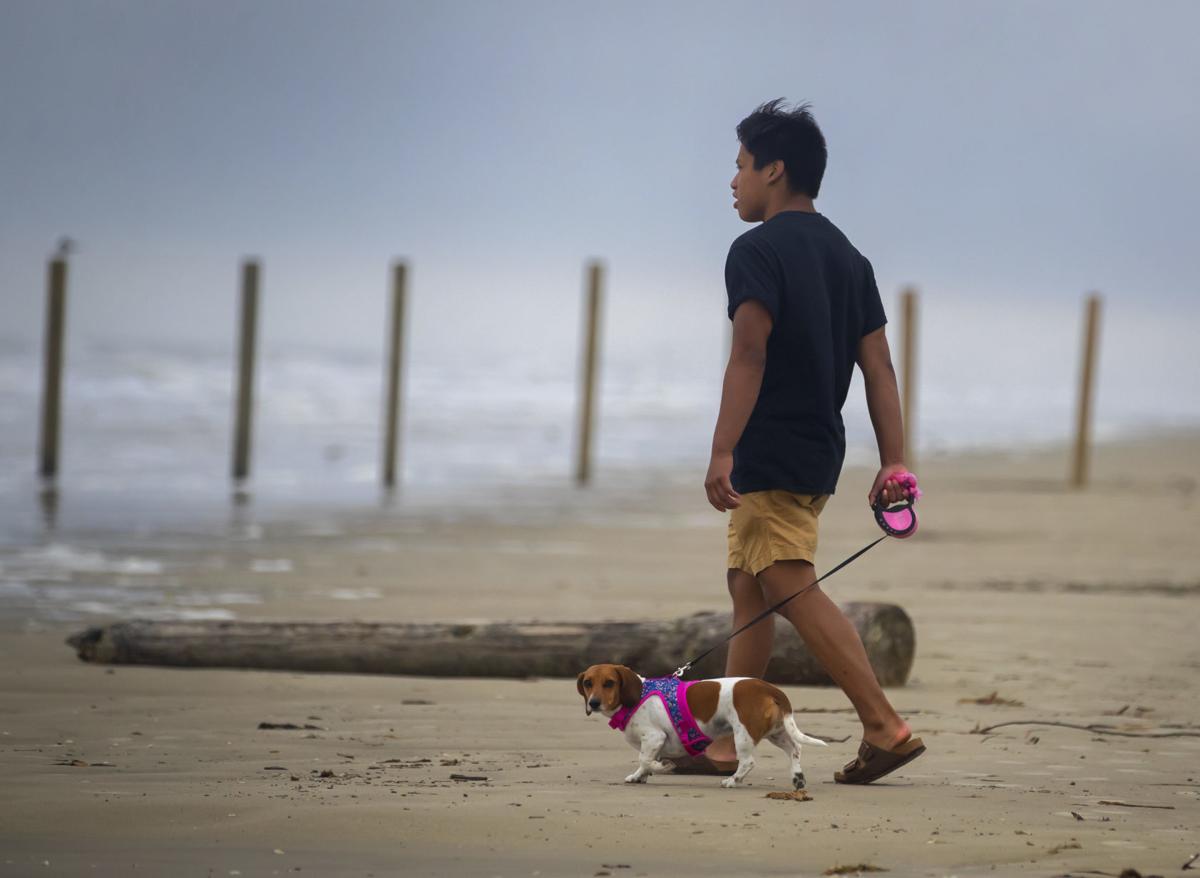 Cruz Dyer of South Dakota takes his dog, Lois, for a solitary walk along the beach in Jamaica Beach on Monday, April 6, 2020. 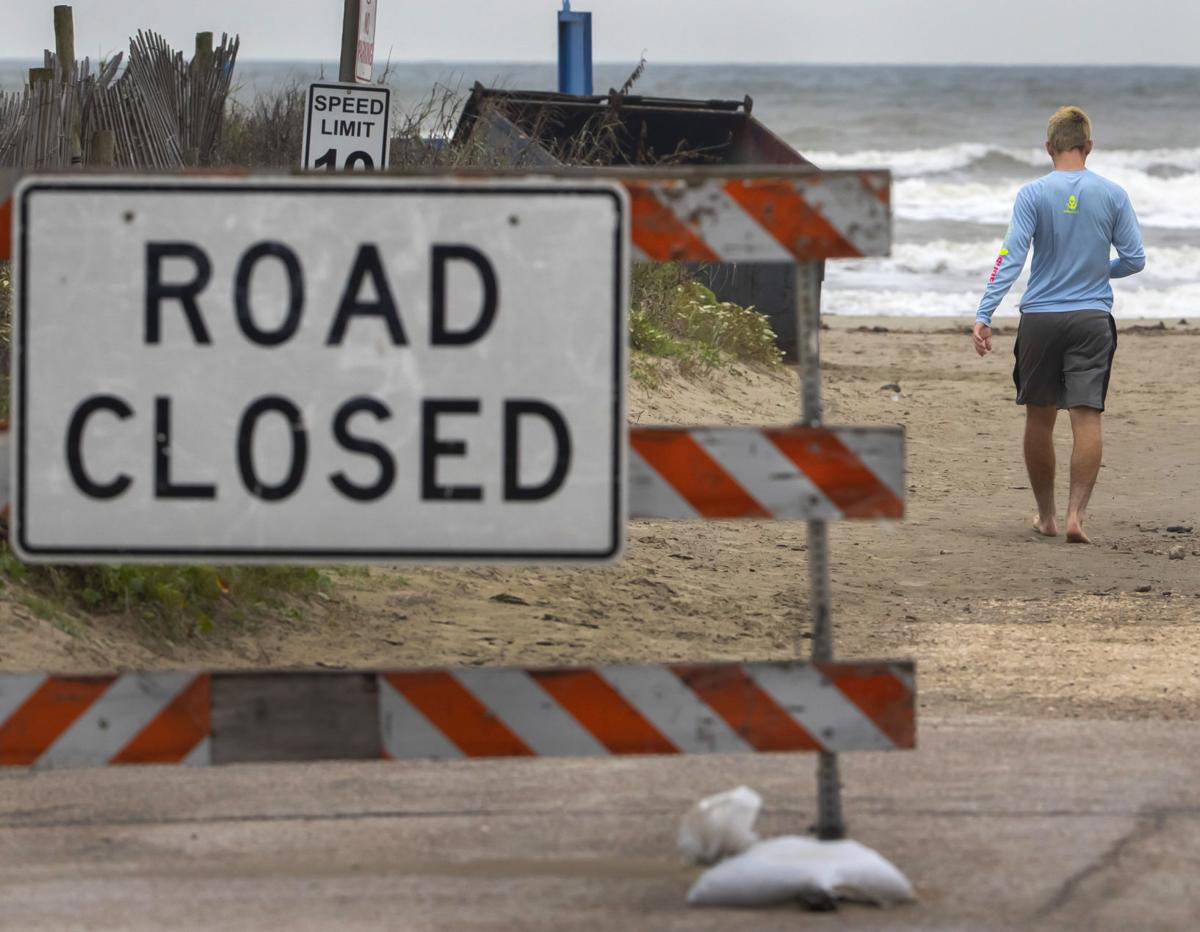 A barricade bars vehicular traffic as a beachgoer walks to the shore in Jamaica Beach on Monday, April 6, 2020.

Cruz Dyer of South Dakota takes his dog, Lois, for a solitary walk along the beach in Jamaica Beach on Monday, April 6, 2020.

A barricade bars vehicular traffic as a beachgoer walks to the shore in Jamaica Beach on Monday, April 6, 2020.

City leaders have no plans to close the beach in this small west-island community, a decision that’s frustrating Galveston officials who say they’re trying to discourage visitors, conserve resources and prevent exposing locals to coronavirus.

The village’s 3,000 or so feet of beach attracts homeowners, not tourists, Mayor Steve Spicer said.

The independent city of fewer than 1,000 people is bordered by the beach and the bay and on the east and west by the city of Galveston.

“I totally understand why they did that,” Spicer said of Galveston’s decision to close beaches. “We don’t have a parking lot. Our beaches are a little different. It’s mainly just homeowners.”

Unlike in Galveston, where it’s relatively easy for visitors to find a space to park, there’s not a huge swath of parking in Jamaica Beach, so the city is unlikely to see a large influx of visitors walking on the sand, Spicer said.

Galveston leaders closed the beaches specifically to discourage tourists from gathering in crowds, they said.

Still, Galveston officials have expressed frustration that some beaches are still open despite pleas for visitors to not travel to the island.

But it’s not only about crowds on the beach, Galveston Mayor Jim Yarbrough said.

People who visit Jamaica Beach would pass through Galveston and are likely to use and further crowd Galveston stores, Yarbrough said.

“Jamaica Beach has no grocery stores of significance,” Yarbrough said. “They’re shopping and coming into our facilities.”

More people in the stores increases the risk of exposure for Galveston residents, Yarbrough said.

Marsee understands the intent of the rule is to keep tourists away but wishes Galveston beaches would reopen at least for part of the day to allow residents to walk or exercise on the beach in the mornings and evenings, he said.

“From what I’ve seen here, the majority of the locals are obeying the beach rule,” Marsee said.

Marsee doesn’t think it’s a problem for the beach at Jamaica Beach to be open, he said.

“I saw no evidence in this part of the beaches that people were clustering,” Marsee said.

Galveston issued orders about two weeks ago, first to boot out non-essential vacation rental guests and then non-essential hotel guests.

But many of the city’s rentals have voluntarily shut down and he only knows of six people in the city’s short-term rentals, Spicer said.

“I’m doing exactly what Gov. Abbott wants me to do,” Spicer said.

One would think that Jamaica Beach would use common sense for the greater good of all. They may not think there is a problem, but it only takes one to jeopardize all.

Mary> What or who is jepardized by a Jamaica beach resident walking on their beach? None. But you would tell them what you want them to do. Shame on you.

Perhaps you should read the entire article. A) There are no restrictions who and can't go to the beach. This is governed by the GLO. A City is not permitted to distinguish between residents and visitors. I never said anything about the beach. B) Vacation rentals are open to guests. I have received numerous calls, emails and text messages from JB residents who don't want visitors staying in their community as well a guests who want to cancel due to "stay at home" orders, but owners/managers will not cancel or refund. Cities should work together for the safety and protection of all.