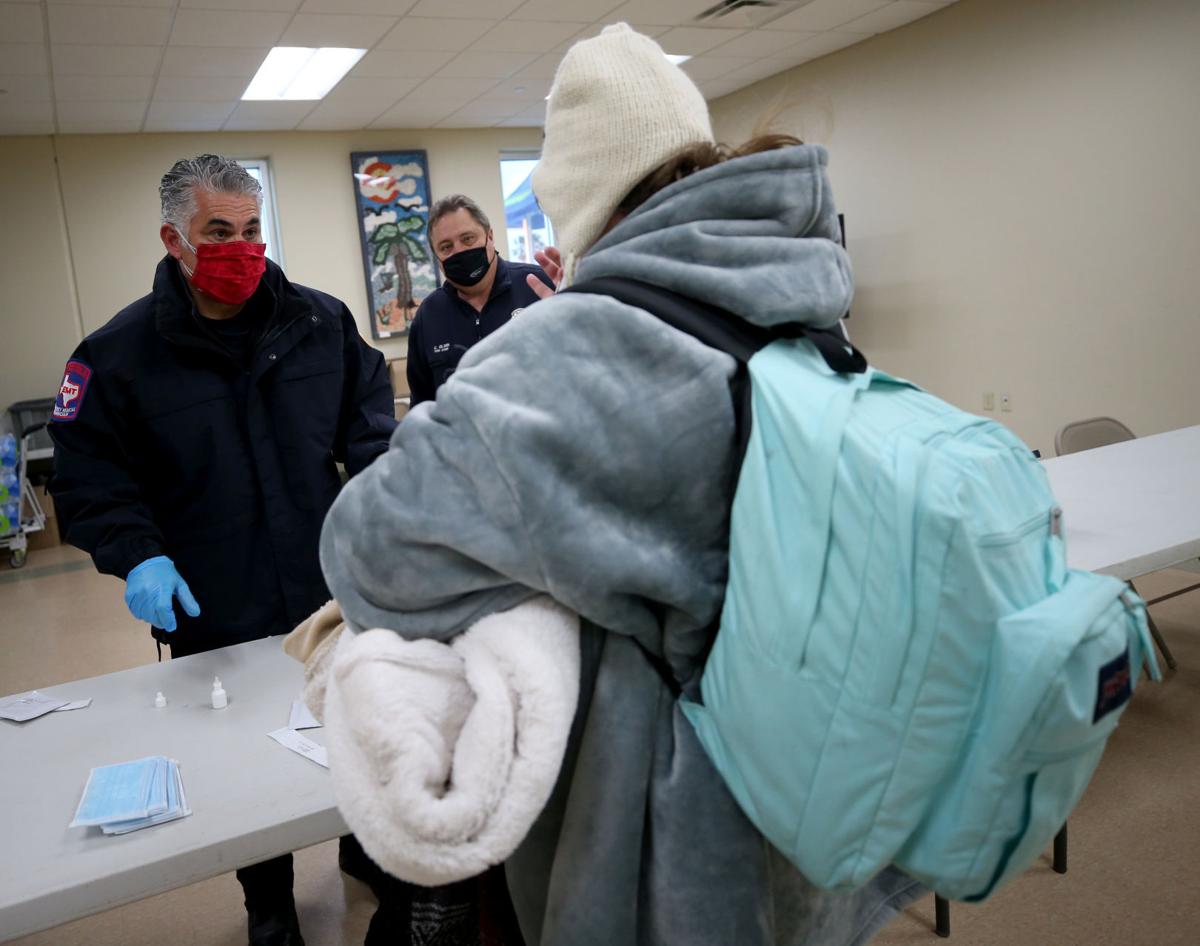 Anastacio Urbina Jr. administers a rapid COVID-19 test to a woman checking into the warming center at McGuire-Dent Recreation Center in Galveston on Monday, Feb. 15, 2021. The city opened the facility to help residents without power to warm up and charge cell phones. 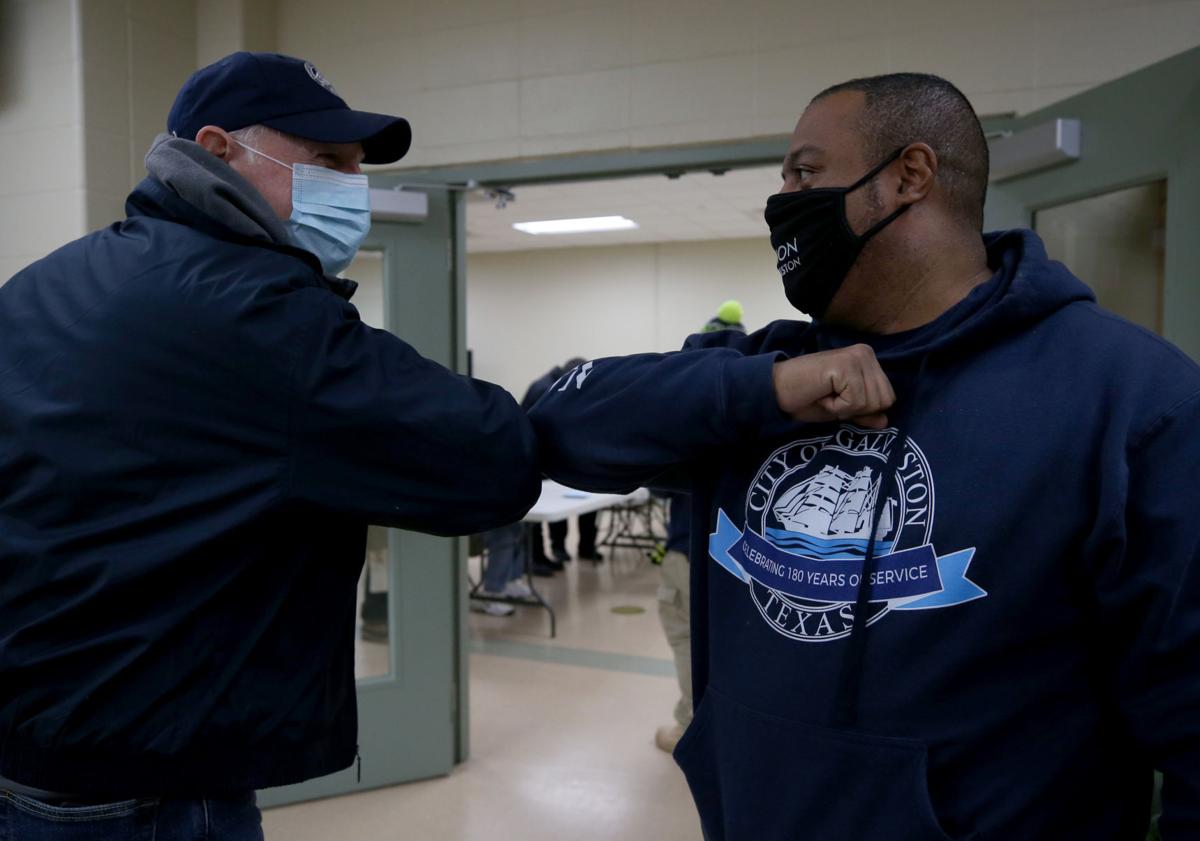 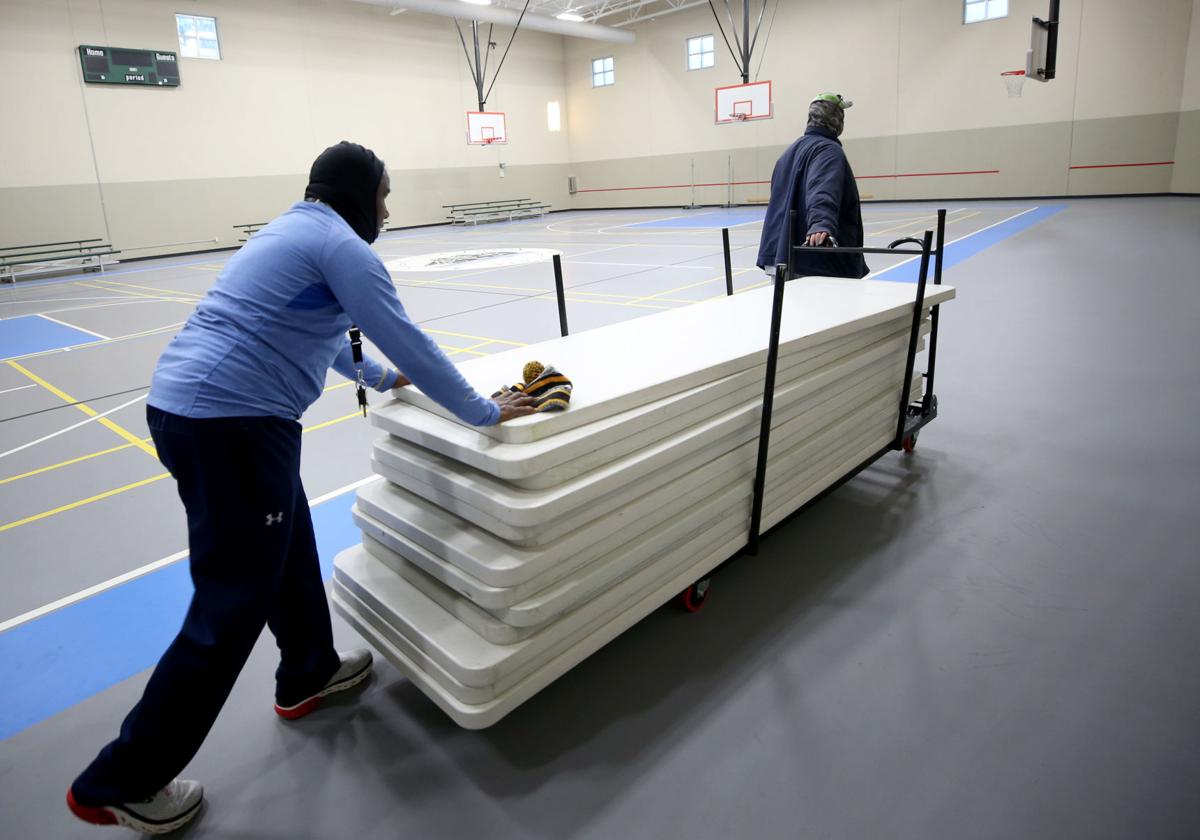 Lawrence Thomas, left, and Carl Clemishaw move tables into the gymnasium at McGuire-Dent Recreation Center in Galveston on Monday, Feb. 15, 2021, as they prepared to open the facility as a warming center.

Anastacio Urbina Jr. administers a rapid COVID-19 test to a woman checking into the warming center at McGuire-Dent Recreation Center in Galveston on Monday, Feb. 15, 2021. The city opened the facility to help residents without power to warm up and charge cell phones.

Lawrence Thomas, left, and Carl Clemishaw move tables into the gymnasium at McGuire-Dent Recreation Center in Galveston on Monday, Feb. 15, 2021, as they prepared to open the facility as a warming center.

People across Galveston County burrowed in for a long, cold night Monday and some who didn’t have heat spent the night at a Galveston warming center.

Just fewer than 100 people stayed overnight at McGuire-Dent Recreation Center, where the city pulled together resources to house residents as most of the island was without power because the state’s grid manager imposed a blackout to reduce demand on the system. The blackouts were supposed to be rolling but weren’t in Galveston and other parts of the county, creating dangerous conditions that angered and worried city and county officials.

The city opened the center again Tuesday night from 6 p.m. to 10 a.m. for residents still without power. The city wasn’t sure exactly how many residents were without power Tuesday afternoon.

By 7 p.m., a handful of people had gathered at the warming center at the recreation facility, 2222 28th St.

The city set up the shelter for residents who needed a place to warm up after many had gone without power or heat since 2 a.m. Monday.

The city set up the warming station, powered by a generator, to give residents who had nowhere else to go a place to stay warm, Mayor Craig Brown said.

“I hope everyone stays warm,” Brown said. “The city is just as concerned about this power outage as our residents are.”

Residents trudged in wrapped in blankets and received rapid COVID-19 tests before they were ushered to the center’s gym.

Aaron Keyser, who moved to Galveston just last week, went to McGuire-Dent after spending all day at home freezing, he said.

“I’ve been laying in bed and I’ve been under like four blankets on top of me, four towels and I’m wearing like five layers of clothes,” Keyser said. “I was losing feeling in my feet.”

All the layers, however, still didn’t help, he said.

Jessica Grover, a student physician assistant at the University of Texas Medical Branch, had been without power since 2 a.m., like many island residents.

“I didn’t want to be in the cold alone,” Grover said.

As a health care student, Grover knew the perils of extreme cold and didn’t want to risk it, she said.

“We know the signs of hypothermia,” Grover said. “I had every single blanket on me.”

Resident Michael Meeks lives just a few blocks from McGuire-Dent and decided to go to the warming center when his landlord told him about it.

Meeks had been lying under blankets, waiting for the power to go back on all day, he said.

He hadn’t been able to get into work because of the weather.

Meeks didn’t want to ride his bike on icy roads and sidewalks, he said.

Many residents sought shelter with friends or family who had power Monday. Others hunkered down in houses where temperatures were below freezing. By Tuesday morning, Galveston County officials were reporting dozens of deaths some believed were related to the brutal cold and power outages.