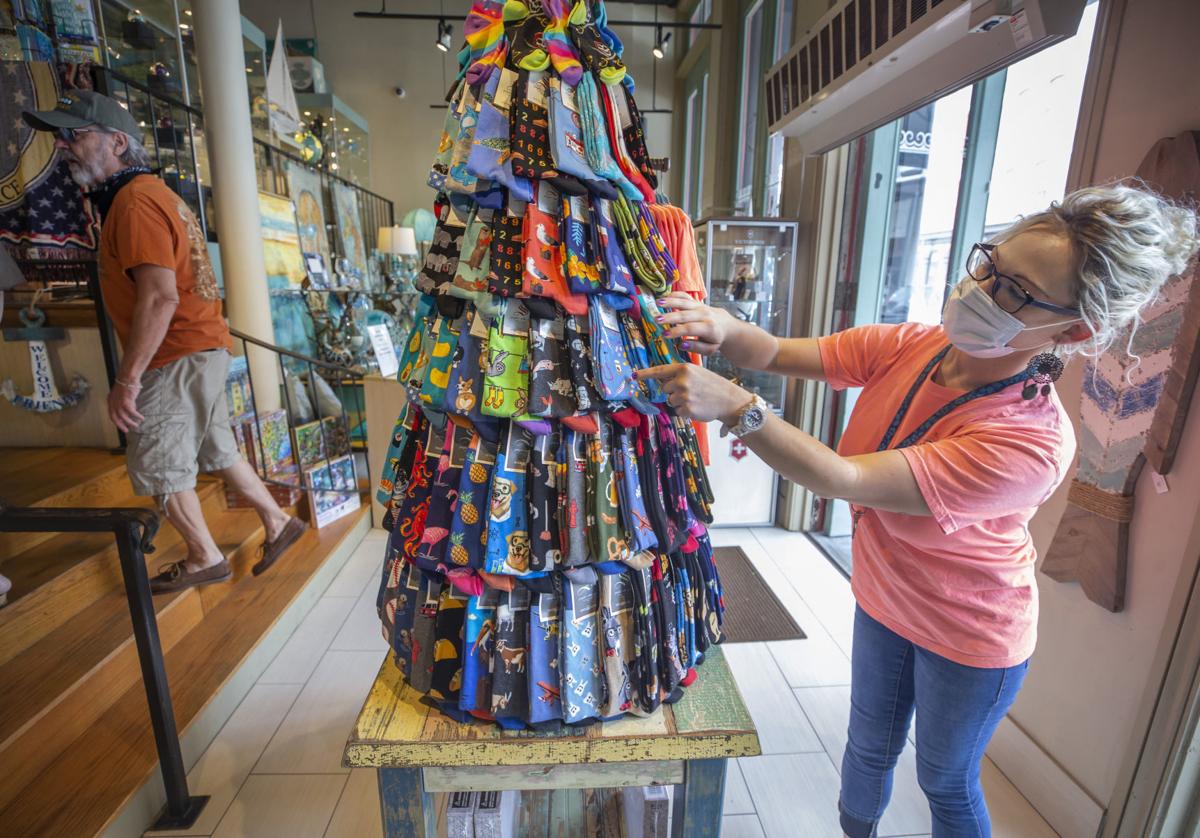 Suzanne Williams, an employee at The Admiralty, organizes a sock rack at the store on The Strand in downtown Galveston on Monday, June 1, 2020. The Admiralty and some other island shops have stopped requiring masks after some patrons became confrontational. 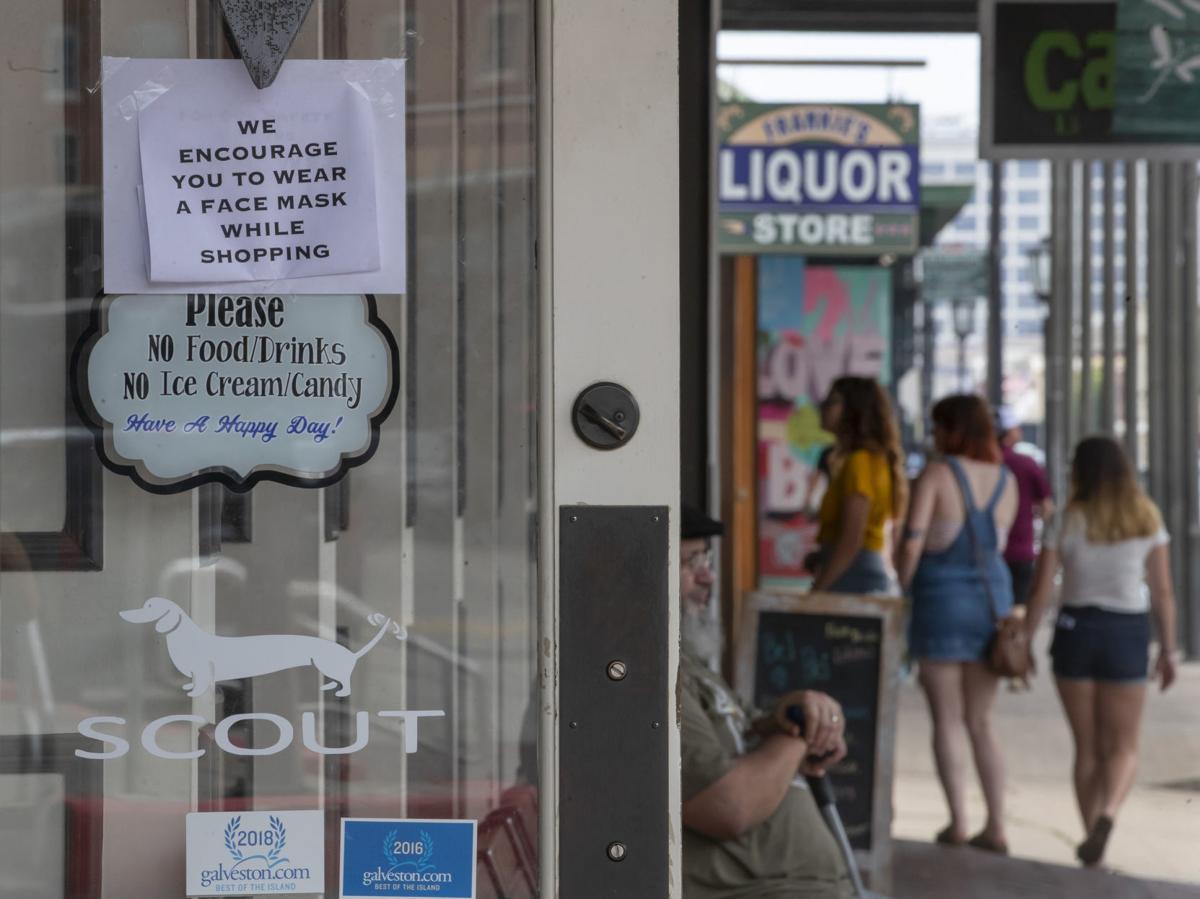 A sign encourages customers at Gracie’s to wear masks as shoppers stroll The Strand in Galveston on Monday, June 1, 2020. Gracie’s tried out mandatory masking, but the shop stopped the requirement after two weeks, owner Genette Bassett said. 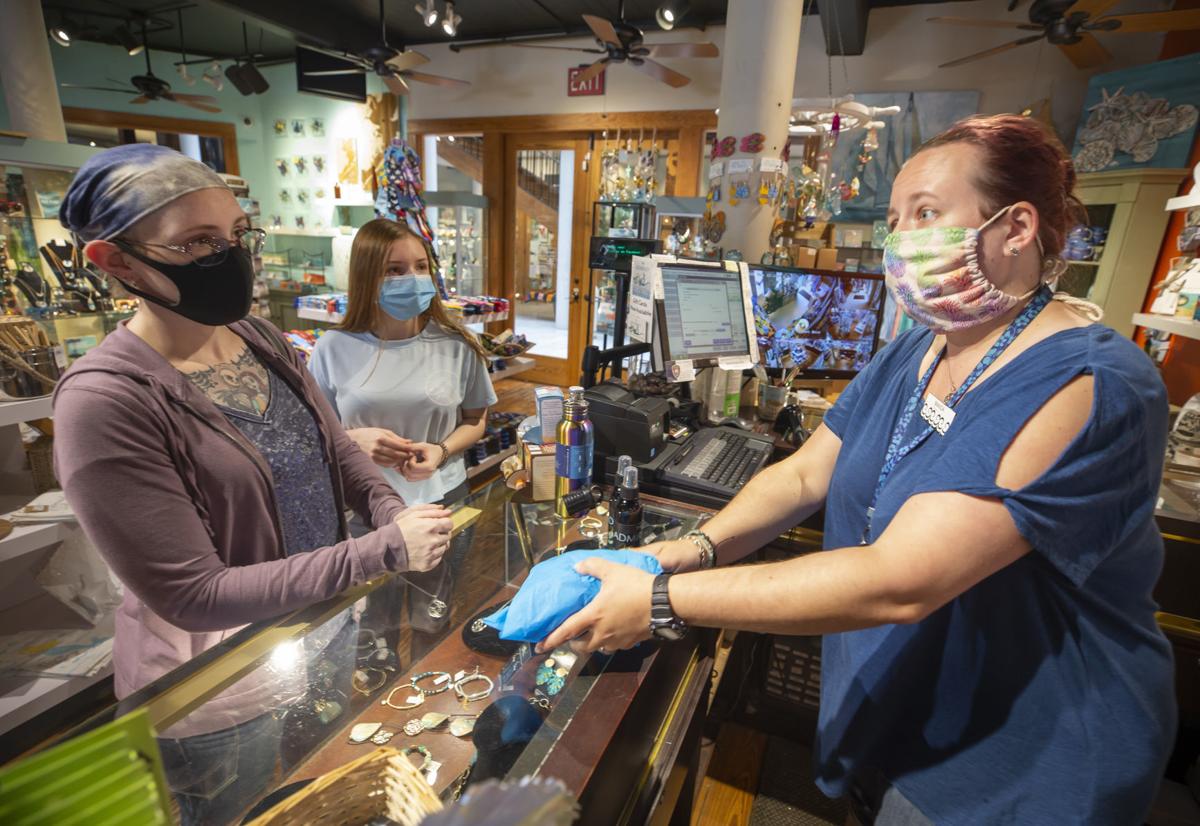 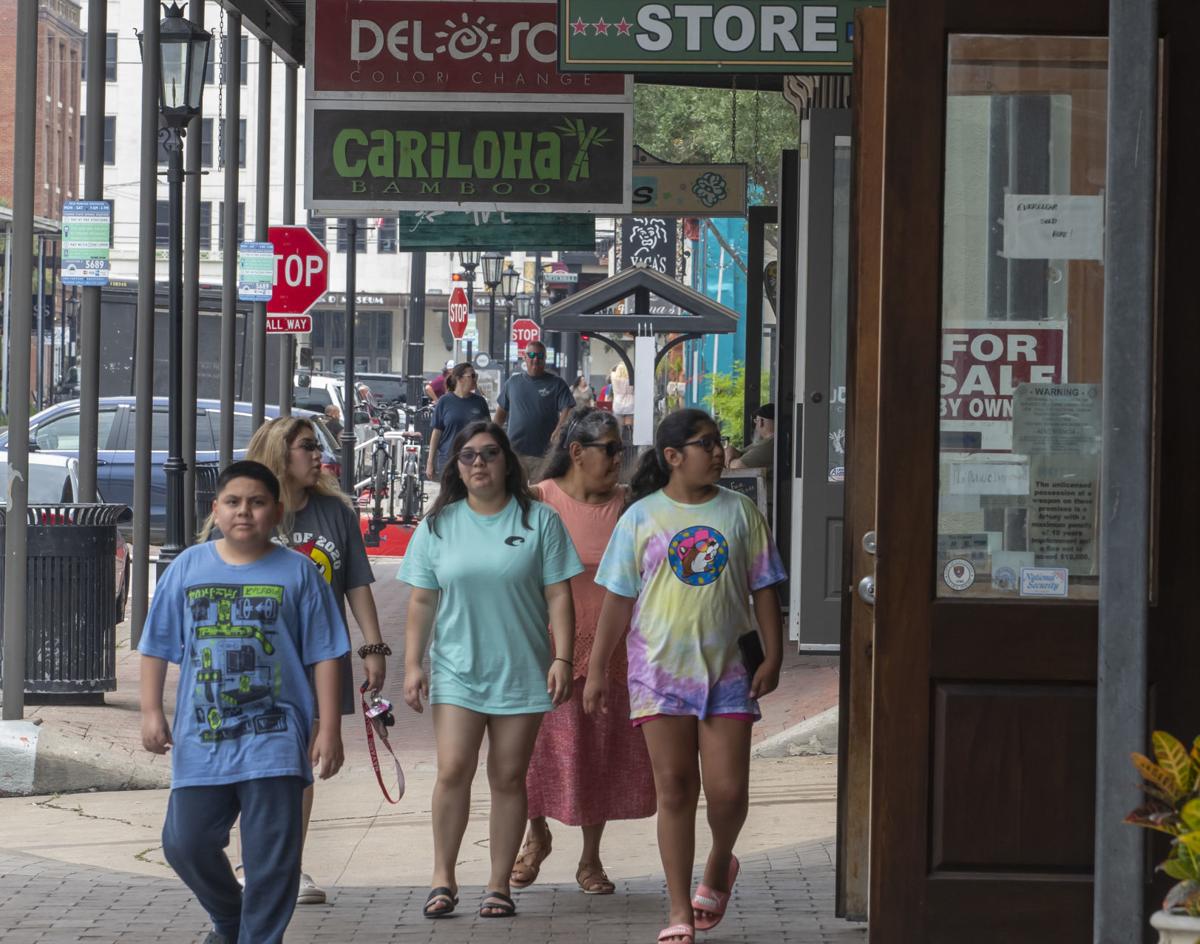 Visitors stroll along The Strand in Galveston on Monday, June 1, 2020. 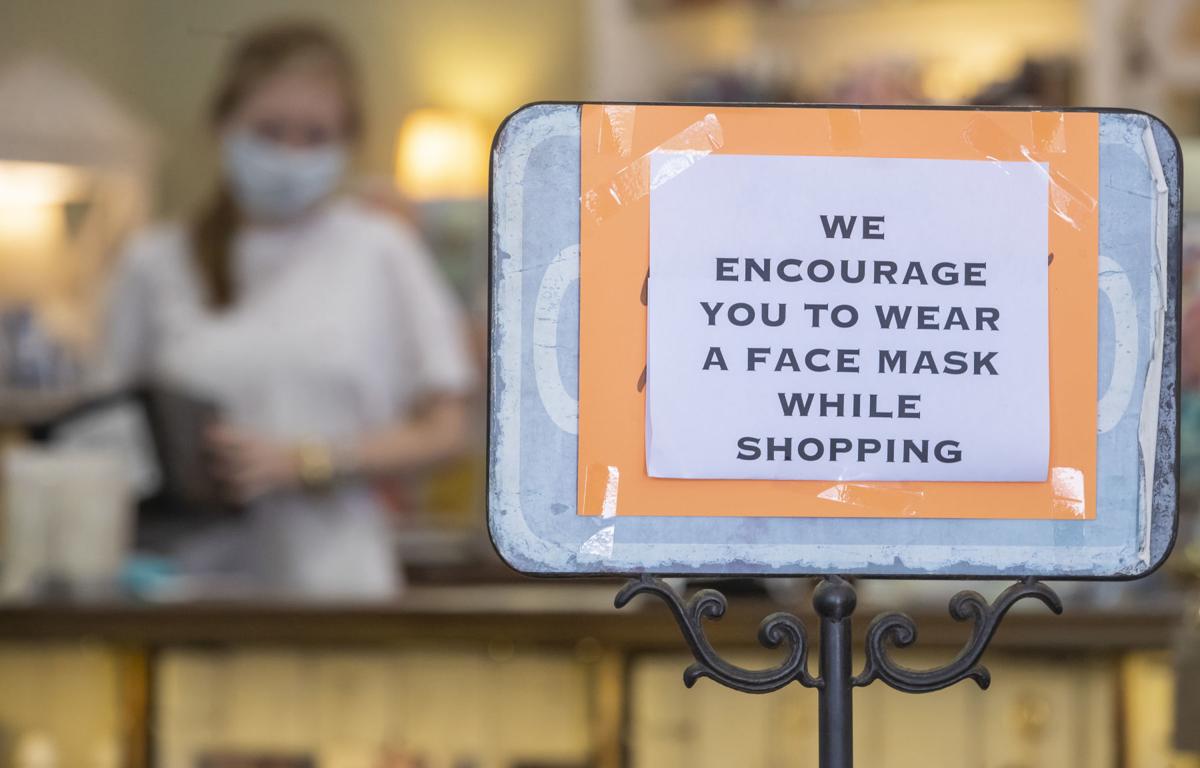 A sign encourages customers at Gracie's to wear masks inside the store in Galveston on Monday, June 1, 2020. Some island shops have stopped requiring masks after some patrons became angry or confrontational. 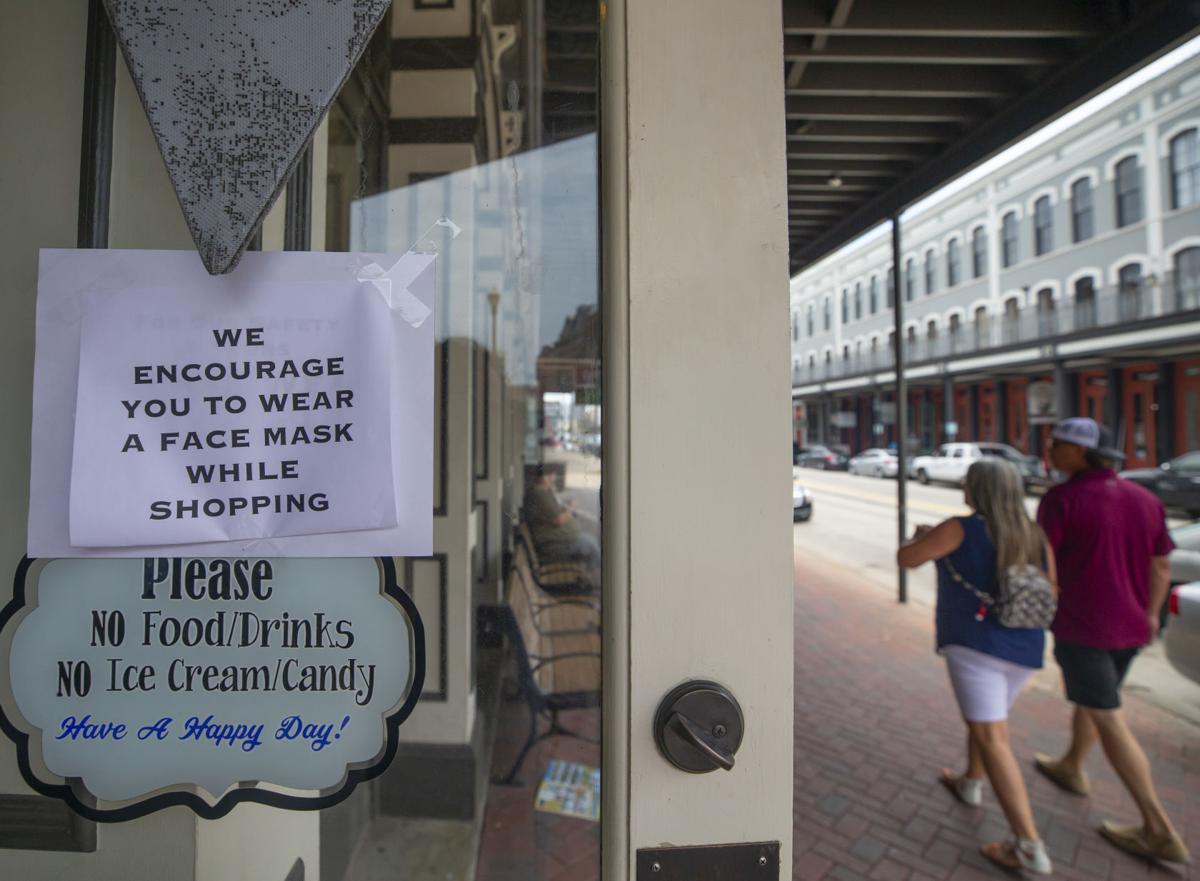 A sign encourages shoppers at Gracie’s to wear masks as visitors stroll The Strand in Galveston on Monday, June 1, 2020. Some island shops have stopped requiring masks after some patrons became angry and confrontational about it.

Suzanne Williams, an employee at The Admiralty, organizes a sock rack at the store on The Strand in downtown Galveston on Monday, June 1, 2020. The Admiralty and some other island shops have stopped requiring masks after some patrons became confrontational.

A sign encourages customers at Gracie’s to wear masks as shoppers stroll The Strand in Galveston on Monday, June 1, 2020. Gracie’s tried out mandatory masking, but the shop stopped the requirement after two weeks, owner Genette Bassett said.

Visitors stroll along The Strand in Galveston on Monday, June 1, 2020.

A sign encourages customers at Gracie's to wear masks inside the store in Galveston on Monday, June 1, 2020. Some island shops have stopped requiring masks after some patrons became angry or confrontational.

A sign encourages shoppers at Gracie’s to wear masks as visitors stroll The Strand in Galveston on Monday, June 1, 2020. Some island shops have stopped requiring masks after some patrons became angry and confrontational about it.

As county retailers worked in May to get their businesses back into gear after weeks of pandemic closures, they had to balance the safety of their employees and patrons with pushback from customers who didn’t want to mask up and who even got confrontational about it in some cases.

When The Admiralty, 2221 Strand St., and Tina’s on The Strand, 2326 Strand St., — both in downtown Galveston — reopened their doors at limited capacity May 1, shop owner Wendy Morgan wanted to keep her employees as safe as possible, she said.

The stores required people to wear masks and, while many people were happy to comply, some were not, Morgan said.

“You’re trying to do something helpful,” Morgan said. “When people get angry and start cussing you out, what are you going to do?”

Initially, the store also was providing masks to anyone who wanted to walk inside and didn’t have one, but that proved too costly, Morgan said.

“We gave out 200 masks in a 24-hour period and that became unsustainable,” Morgan said.

“It was a big battle,” Bassett said.

Now, store staff is requesting that people wear masks, but it wasn’t worth the requirement after people starting getting confrontational with staff, Bassett said.

“You want to welcome your customers,” Bassett said. “It’s a very fine line.”

Gracie’s staff instead is being vigilant about providing hand sanitizer and asking people to keep 6 feet from others.

Bassett is thankful to be open after for almost two months but wants to keep staff and customers as safe as possible, she said.

Retail, especially small businesses, took a hard hit when Gov. Greg Abbott in March ordered statewide closures to combat the spread of COVID-19. Many closed their doors or transitioned only to pick-up orders during spring break, what normally would have been the start to the busy summer season.

Despite how hard it is to stay closed, some business owners have been taking a slower approach.

Tangerine Boutique, 2218 Postoffice St. in downtown Galveston, had been open for appointments only until Friday, when the shop reopened with limited hours, owner Kim Cherryhomes said.

“I took a hit from it, but I have no regrets,” Cherryhomes said. “I knew it was what I had to do.”

Most people respect her request that they wear a mask in her store, but some don’t want to, she said.

“I had people come through this weekend that said, ‘I don’t believe in the mask,’” Cherryhomes said.

It’s a shame that many patrons become belligerent when a store asks them to consider the safety of their employees. If you don’t want to wear a mask In a store, don’t throw a hissy fit, just politely leave and take your business elsewhere.

These jerks are just following the president's example. A horrible example of his poor leadership.

Baily, you are exactly right. The Orange idiot most recent stunt was not masking up at a plant that produces the test swabs. They had throw them out because of his idiocy.

(They are probably shoplifting from you too. Watch them close)

A very funny comment considering Antifa elements have been helping to coordinate the mass looting of America's shops and stores for the past few days.

Antifa agitators don't shoplift. By the time they're through with a business, there is only ash and rubble left. The merchandise already left through the front window.

I'd love to see the arrest record of any of these instigators with any evidence that they actually belong to any of these groups (antifa, 3%, nazis, etc). I assume you have such info since you keep making this claim.

Bailey, I'm pretty sure you know that no one arrested for any protest is either required to nor voluntarily offers their political affiliation. There are both undercover and "official" videos on You Tube that catalog the logistical organization that Antifa has thrown into these so-called spontaneous demonstrations. It includes communications, medical prepping, martial arts training, improvised weapons and so on.

Protesters show up in whatever they have on. Black Block and Antifa have apparel so standardized it is being caricatured online. Flags with the Antifa symbol are also a great indication this isn't the local Rotary chapter under the banners.

There is a video I saw recently of a Bernie Sanders regional organizer who was taped earlier in the year espousing decidedly unBernie-like sentiments about how to act in these demonstrations. He clearly showed up again in a recent riot--not protest--and was shown feverishly directing black youths on where they needed to mass for confrontations. There is a reason why you can easily find videos of black protesters chasing off these white radicals; they know they are there to create violence and often do not want to be associated with their tactics.

I also think it's important for folks to know Antifa is just the modern incarnation of the roving bands of Bolshevik street thugs who came to Germany after the 1917 Communist Revolution in Russia hoping to foment a similar Red revolution there. The brown shirts of what became known later as the Nazi party fought pitched street battles with them. Take a look at their flags and regalia; today's Antifa are using the same symbols. It is a Marxian organization that desires to emulate the tactics and pursue the same goals seen in 1918 Germany.

Perhaps the public is fed up. Unless one is using a mask properly, and it is fitted properly, and it is not touched during use, and if proper infection control measures are exercised, the simple presence of a mask only serves to impede communication. "If you are healthy, you only need to wear a mask if you are taking care of a person with COVID-19," - WHO

Robert, please educate yourself. The benefits of wearing a mask are protecting others and oneself from virus transmission. I am not sure how anyone couldn't know this by now.

I was at a Galveston gift shop yesterday. The sales employee had her mask hanging around her neck when I entered.

As soon as she saw me wearing my mask she pulled hers up on to her face. She pleasantly helped me, conversed with me, sold me my stuff and thanked me for my purchase. As I was leaving a young couple entered the shop without wearing masks. The clerk lowered hers back around her neck and proceeded to graciously wait on them.

I see nothing wrong with having it both ways.

Some people just want to start some **** to show the world that they are angry.

Robert, and how does your scenario work in a crowded area with multiple customers in the same area?

Wayne, I’ve been waiting for instructions from Antifa headquarters for days but nobody has contacted me. I’ve even tried faxing George Soros, but I keep getting a busy signal.

Ted just wants some of that Soros money. I hear only the top Antifa echelons get paid. The rest of Antifa has to loot to get paid.

Easy enough Ted, take a drive to Austin. You won't have trouble spotting them, they're the ones sporting hammer and sickle tee shirts who have never read a line of Solzhenitsyn.

Solzhenitsyn. They’re the ones that sell Cinnabon’s, right?