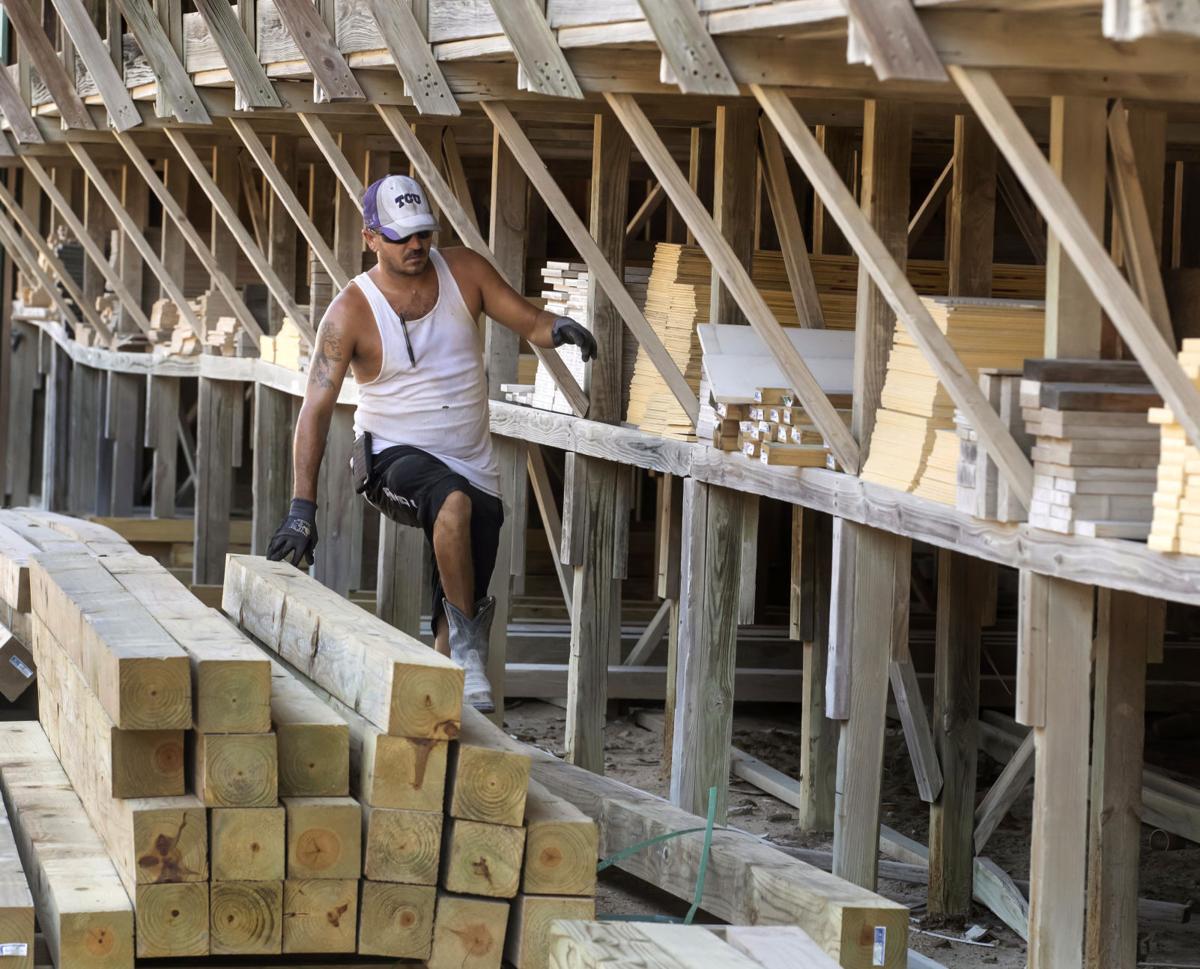 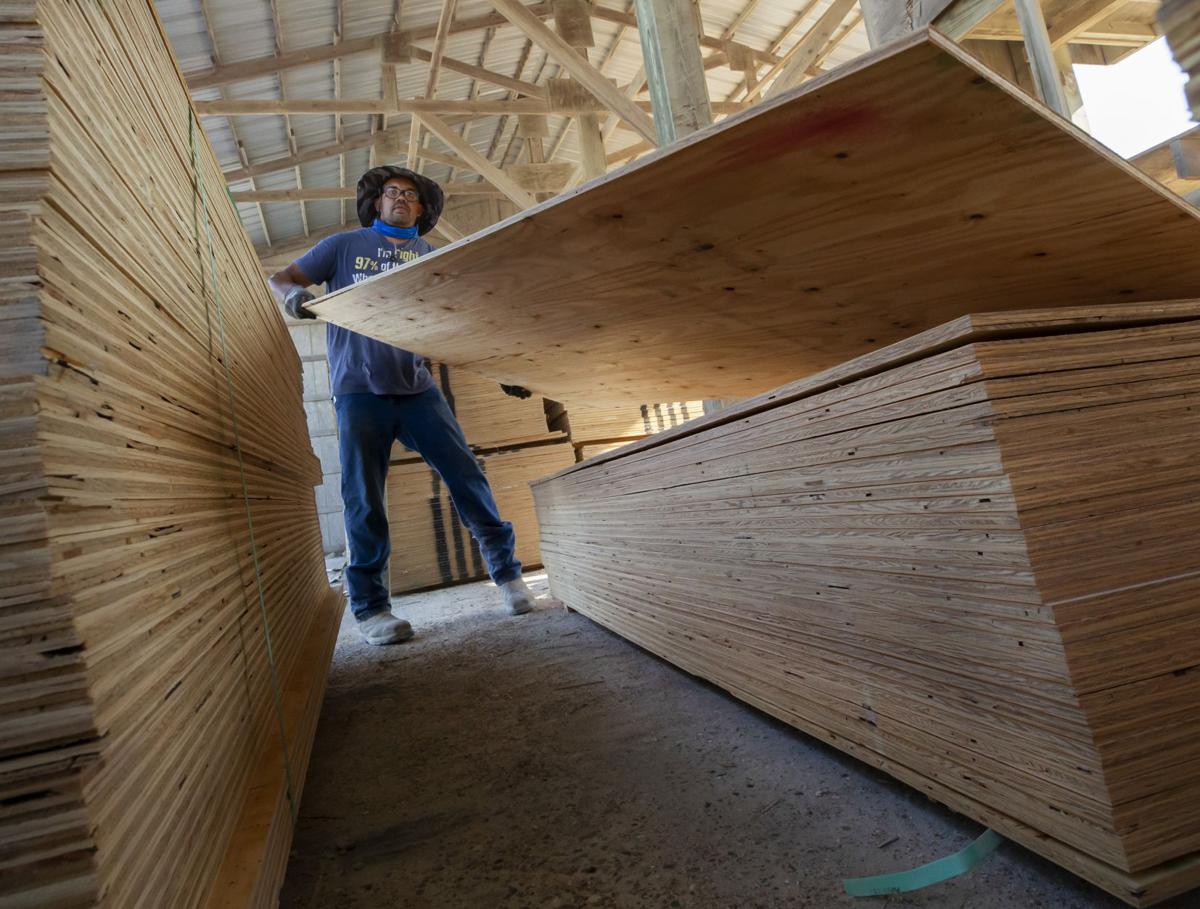 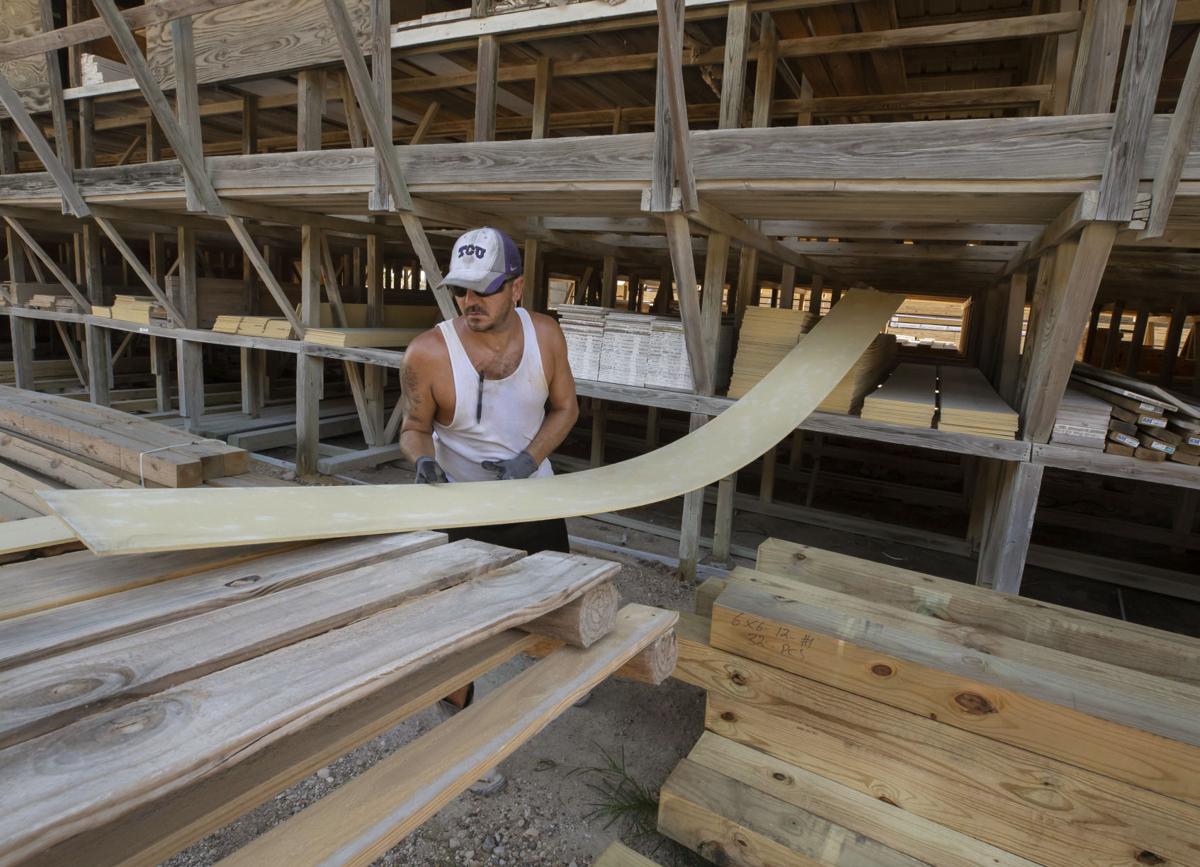 Galveston Wholesale Building Materials employee Richie Green loads up wood onto a forklift at the company lumberyard in Galveston on Friday, Aug. 7, 2020. 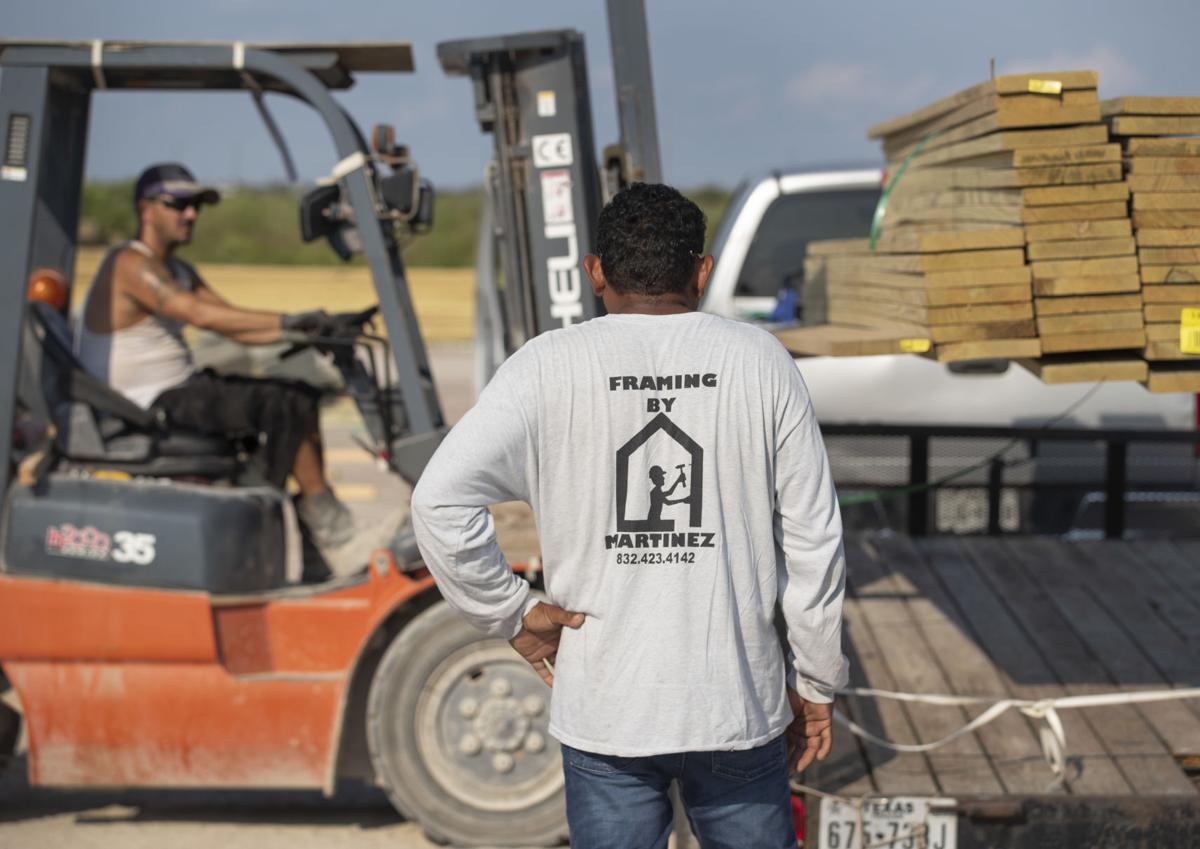 Galveston Wholesale Building Materials employee Richie Green uses a forklift to load lumber for a customer at the company lumberyard in Galveston on Friday, Aug. 7, 2020. 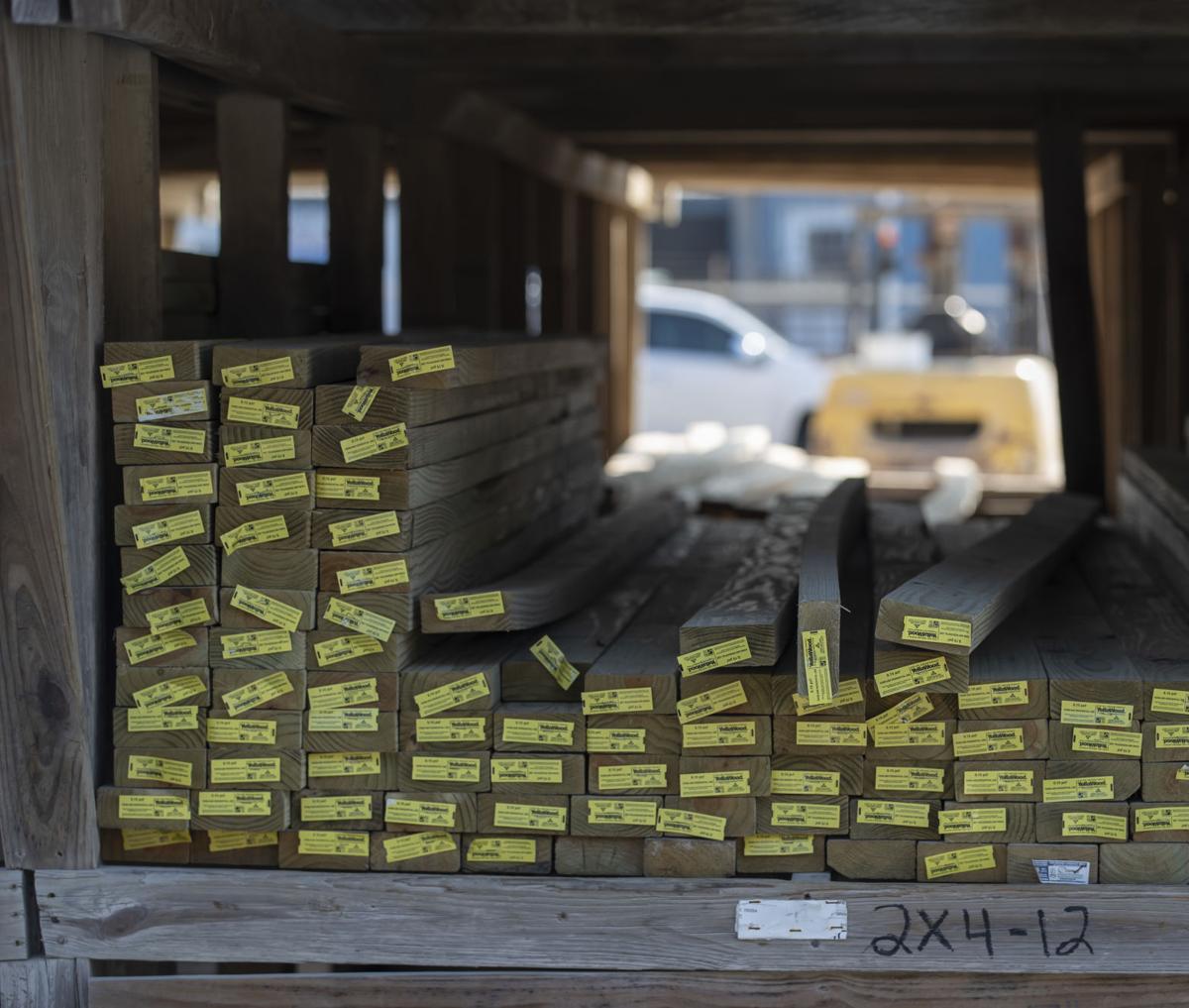 Cut lumber rest on a rack at Galveston Wholesale Building Materials in Galveston on Friday, Aug. 7, 2020.

Galveston Wholesale Building Materials employee Richie Green loads up wood onto a forklift at the company lumberyard in Galveston on Friday, Aug. 7, 2020.

Galveston Wholesale Building Materials employee Richie Green uses a forklift to load lumber for a customer at the company lumberyard in Galveston on Friday, Aug. 7, 2020.

Cut lumber rest on a rack at Galveston Wholesale Building Materials in Galveston on Friday, Aug. 7, 2020.

When builders go to the lumberyard, they expect two-by-fours in ample supply. It’s like expecting to find milk at the supermarket.

So, earlier this year, when the number of two-by-fours available to builders fell off dramatically, Jay Wilson knew something was up.

“The supply chain was screwed up,” said Wilson, the owner of Wilson Construction in Galveston. “Dimension sizes were in limited supplies; even something as simple as a two-by-four-by-twelve Southern yellow pine treated was in extremely short supply.”

The fallout of the COVID-19 pandemic has thrown local builders and building suppliers into chaos as decreases in the supply of some material, combined with a higher demand for supplies, has resulted in unprecedented price increases.

“We’ve had to shop all over town for pickets for fences,” said Ron Woods, the owner of Firehouse Builders, a general contracting company that specializes in building fences, decks and other smaller projects. After looking for supplies in the usual big construction vendors and striking out, Woods found what he wanted at a smaller lumberyard in Texas City.

“We had to pay three times the price,” he said. “The explanation they had for us was that COVID-19 shut down the plants that treat the wood, and that finally caught up.”

The price changes are affecting all sorts of basic building materials, said Al Fichera, the owner of Fichera Builders in Galveston. In the past two weeks, sheets of plywood have gone from $15 a sheet to $34 a sheet, he said. It’s normal for the price of building supplies to fluctuate, he said, but that kind of spike is unusual.

Jimbo Carr, the owner of Galveston’s Carr Construction Services, which builds homes and commercial buildings in Galveston and Harris counties, said the current price increases represent the “longest sustained rise in prices” he’d seen in all his years of business.

Many factors are feeding the volatility, insiders said. COVID-19 infections and precautions earlier this year shut down lumber mills, creating a shortage in supplies, particularly in pressure-treated wood.

That was followed by an increase in demand for common materials such as plywood and two-by-fours, apparently driven by a surge in interest among people working from home or furloughed and able to complete home-improvement projects such as building fences and decks.

Now another surge in demand is underway driven by people building new houses, both in Galveston County and across the country.

The higher prices showing up in lumberyards now are a result of decisions suppliers made months ago.

“I think it’s a demand issue,” said Bill Schick, who sells lumber for Raleigh, North Carolina-based Building Materials and Construction Solutions. “I don’t think the mills anticipated this kind of demand after such a slowdown in the early spring, and it’s just hard to gear it back up. They did very little logging in the first three months of this year, so they’ve been playing catch-up all along.”

A surge in home building isn’t limited to Galveston County.

Still, the number of new houses being built this year is lower than it was in June 2019.

His theory is that people working from home want bigger, better spaces and are building them or that people avoiding long trips abroad see reason and opportunity to invest in building homes near the beach.

“When the housing market didn’t crash, and with these low interest rates, some of these people who are big players in the stock market are saying, ‘I’m going to go build a few houses,’” Apffel said. “We’ve stayed as busy as we were last year. We’re right on par. Pandemic or no pandemic, we did the same.”

The situation now is that builders have to search wide and act fast to obtain the material they need.

“The prices have gone up and there’s nothing even on the shelf,” said Fichera. “If you order it, it may be weeks out.”

It remains to be seen how long the volatile building supply market will last. In the meantime, people with projects on their minds should go in expecting longer timelines and higher prices, said Michelle Lyle, a co-owner of Bohn’s Building Materials in Texas City.

“We try to keep up with as much material as we can,” Lyle said “Several of our window suppliers have gone through virus problems. They have to shut their facilities down completely and then start back up. Our windows have gone from a 10-day lead time to a three-week lead time. That puts things behind.”

Ultimately, the added costs that come from buying supplies will be passed on to homebuyers, Schick said.

Another, more ominous, possibility is also weighing on the minds of building suppliers about what the future might hold. There’s always a chance that a hurricane or tropical storm could blow across the Texas coast in coming weeks.

If that happens, the world will enter truly uncharted territories, Lyle said.

“If we had a big storm come through here right now, I really couldn’t tell you what would happen,” she said. “It would just be awful.”

Built some wood fence recently. First went out and bought a trailer load of framing and concrete, put that up. Next day we went to buy the pickets and my usual lumber yard was totally out. Called everyone, finally drove out to Kemah Hardware and was able to buy a bundle of treated pickets.

It' not just lumber. We have been trying to get a new roof installed. The supplier shut down production this spring due to COVID and is slow filling orders due to the resulting backlog.