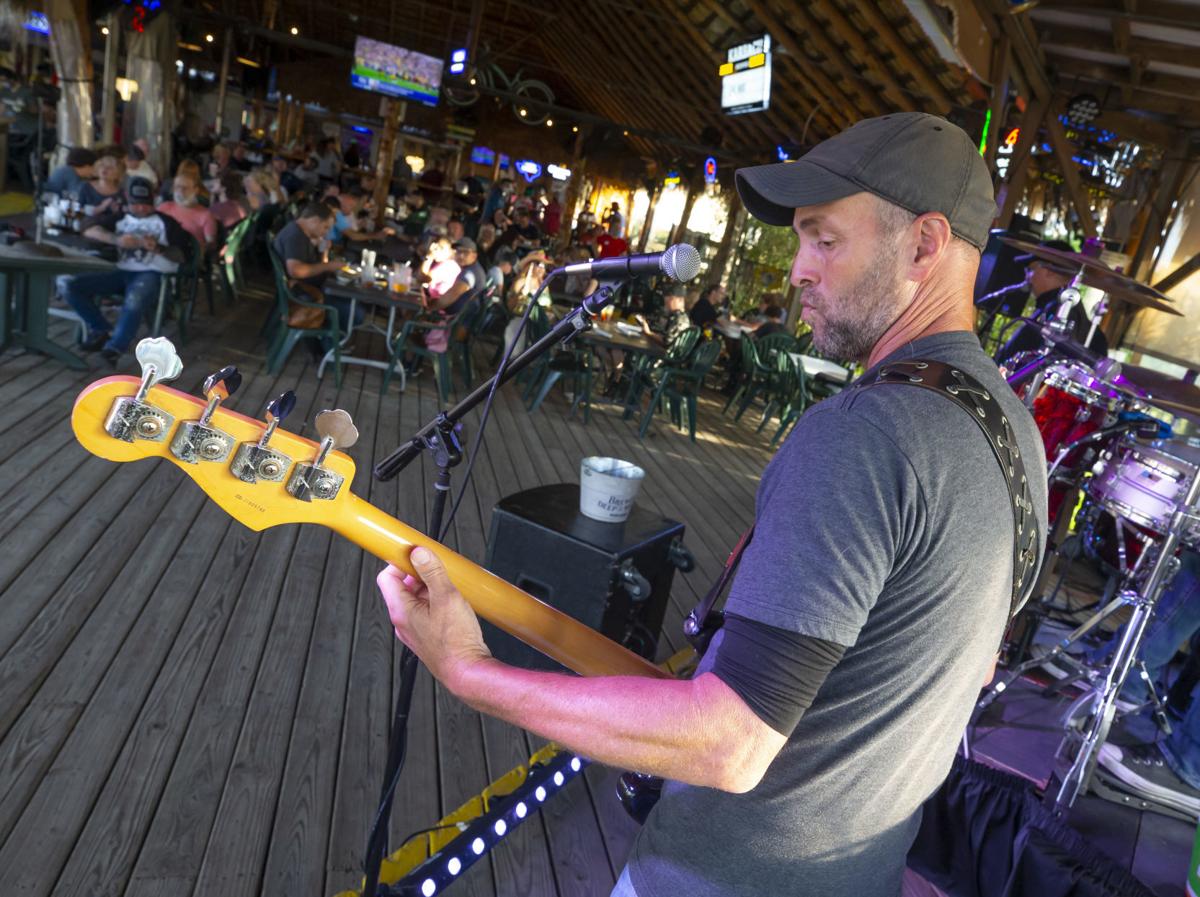 Bassist Stacy Cook of the Galveston-based band The Line Up plays for diners at T-Bone Tom’s in Kemah on Friday, May 22, 2020. 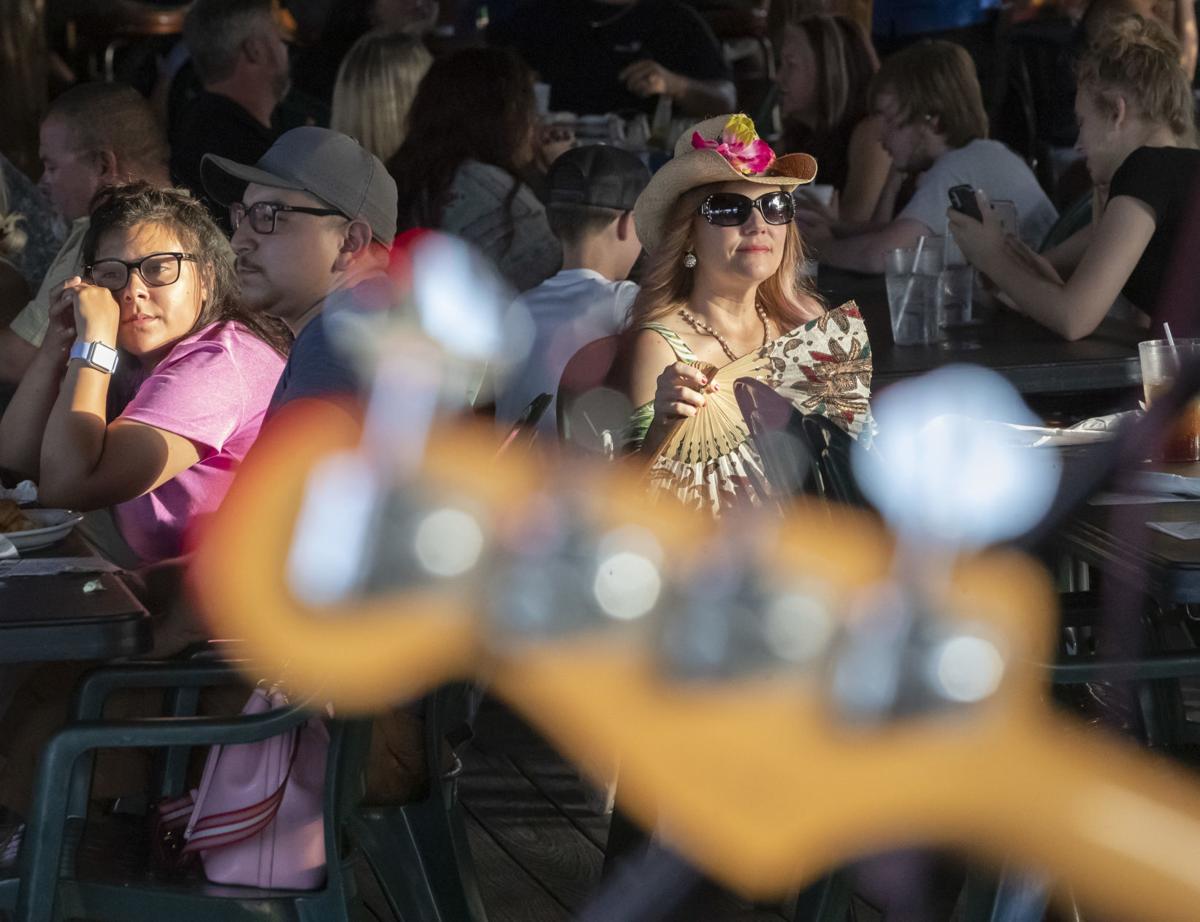 The dinner crowd at T-Bone Tom’s listens as the Galveston-based band The Line Up plays in Kemah on Friday, May 22, 2020.

Bassist Stacy Cook of the Galveston-based band The Line Up plays for diners at T-Bone Tom’s in Kemah on Friday, May 22, 2020.

The dinner crowd at T-Bone Tom’s listens as the Galveston-based band The Line Up plays in Kemah on Friday, May 22, 2020.

Operators are reopening businesses and people are getting back to work, but the live entertainment industry is on a slower track to return because social distancing measures limit how many people can attend a live show.

Although both musicians and patrons are eager to get back to live performances, some venues face challenges covering costs as capacity limits throttle revenue coming through the doors.

“A lot of musicians have been sitting at home for a couple months,” Burke said. “They’re bored out of their minds.”

They’re ready to play, even for less money than they normally demand, just to get out and get their music back on people’s minds, Burke said.

Galveston County is known for several small venues that support a close-knit community of artists and attract locals and visitors alike.

T-Bone Tom’s, 707 state Highway 146 in Kemah, is known for hosting live music six nights a week. But when the restaurant had to shut down its dining room, it had to cancel all the bands it had booked for several months, manager and Director of Music Jeff Sauerwein said.

“I had to cancel all of the May calendar and start from scratch and will do the same thing for June,” Sauerwein said.

During normal times, the music brings in more people who stay longer and spend more money, he said.

The restaurant has been booking solo acts to its back patio, but it doesn’t have the money to pay for larger bands, Sauerwein said.

“We fully intend to keep doing the live music, but not to the degree that it was before in terms of the expense and the size of the bands,” Sauerwein said. “We certainly hope to get back to that.”

THE PATH TO REOPENED

Other venues are still trying to figure out how to reopen at all.

Small, intimate venue Old Quarter Acoustic Cafe, 413 20th St. in Galveston, has been closed for about two months and is talking about spacing out tables upon an eventual return, owners and operators Joel and Angela Mora said.

That would leave about 20 to 30 people maximum in the venue, known for acoustic music, Joel Mora said.

Patrons are ready to come back, but artists are being more cautious, he said.

“Some people are more willing to come out and play,” Mora said. “Obviously, that’s how they make their living.”

But some have told the Moras they’re not coming back until next year.

And at the Old Quarter, musicians are paid what the ticket sales bring in, so the reduced capacity isn’t going to be enough to entice some artists to the venue, Joel Mora said.

Both venues and artists have been hit hard.

An early April survey by nonprofit Mid-America Arts Alliance estimated that of the Texas artists surveyed, 40 percent lost between three and five jobs because of the virus. About 34 percent had lost more than $5,000 in earnings, according to the survey.

By now, artists are ready to get back to work, said Mike Marsh, a drummer in several local bands including The Lightning Rob Band and Blood Red Sky.

Gigs are Marsh’s main source of income and a busy spring full of shows was all canceled, he said.

“We were just itching to play again,” Marsh said.

Once restaurants started opening, he saw gigs pop up for some solo acoustic artists, he said.

“As a drummer, I don’t have that opportunity a lot of times,” Marsh said.

Now that bars are reopening, Marsh is starting to get more bookings. After Gov. Greg Abbott announced Monday bars could reopen at 25 percent capacity, Marsh booked five gigs, he said.

Larger venues will face challenges, but Marsh is optimistic.

“I think it’s going to get better faster than people think,” Marsh said.

The Grand 1894 Opera House, 2020 Postoffice St. in Galveston’s downtown, canceled its spring season March 16 amid a flurry of cancellations as fears of coronavirus swept across the county.

Reopening the historic theater will pose significant logistical challenges to make sure everyone is safe, Executive Director Maureen Patton said.

Reopening at 25 percent capacity would mean selling only 200 of the theater’s 1,000 seats, and staff will have to figure out how to space those people out safely, Patton said.

But at reduced capacity, The Grand can’t afford its usual shows, and performers are a little antsy about returning to the show road, anyway, Patton said.

“The promoters and the producers are all concerned,” Patton said. “They’re not going to put a bunch of people on a bus and travel them all over the country.”

The facility instead is looking at coming back in August with a few one-man show performances, Patton said.

Until it reopens, The Grand, in tradition of historic theaters, is keeping on a “ghost light” to remember past performances and stay ready for a future audience, Patton said.