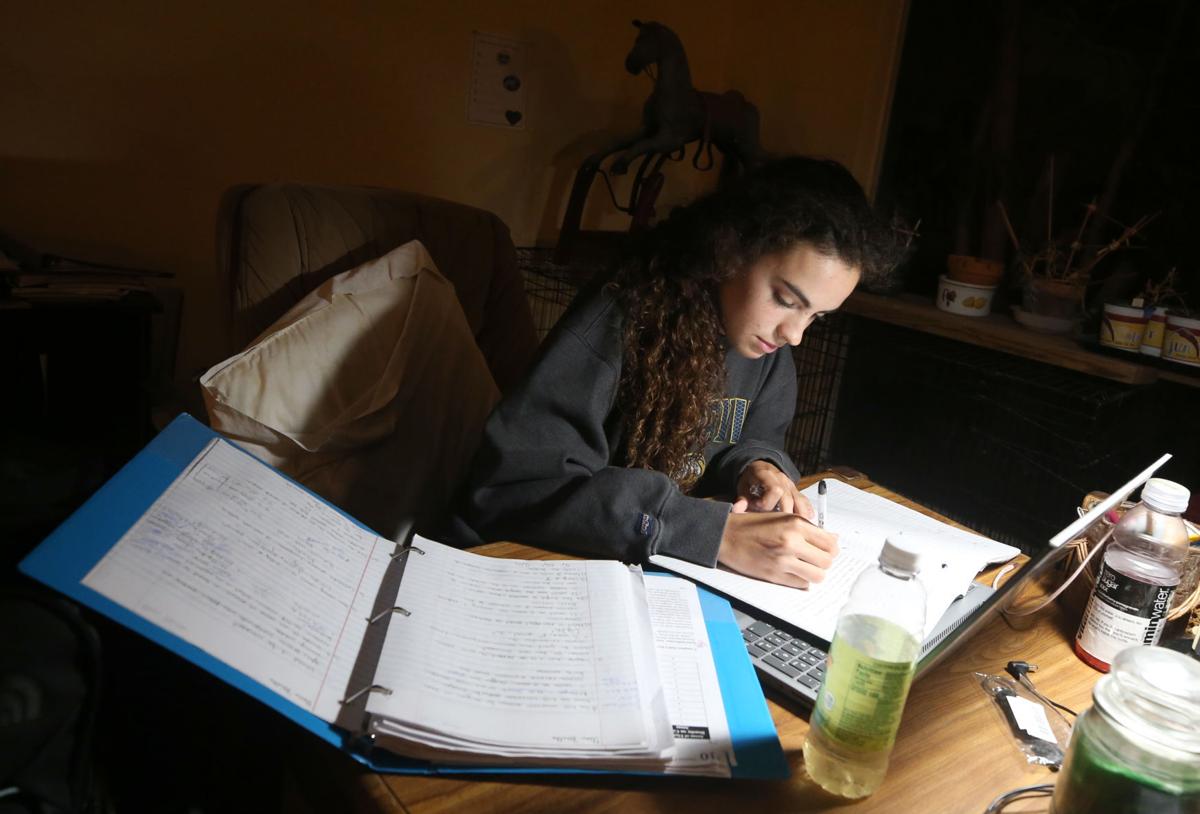 Elena Foulks, a sophomore at Ball High School in Galveston, does chemistry homework at her family’s dining room table Thursday, Dec. 10, 2020. Foulks, who is normally an A student, has found herself struggling with online learning this school year. 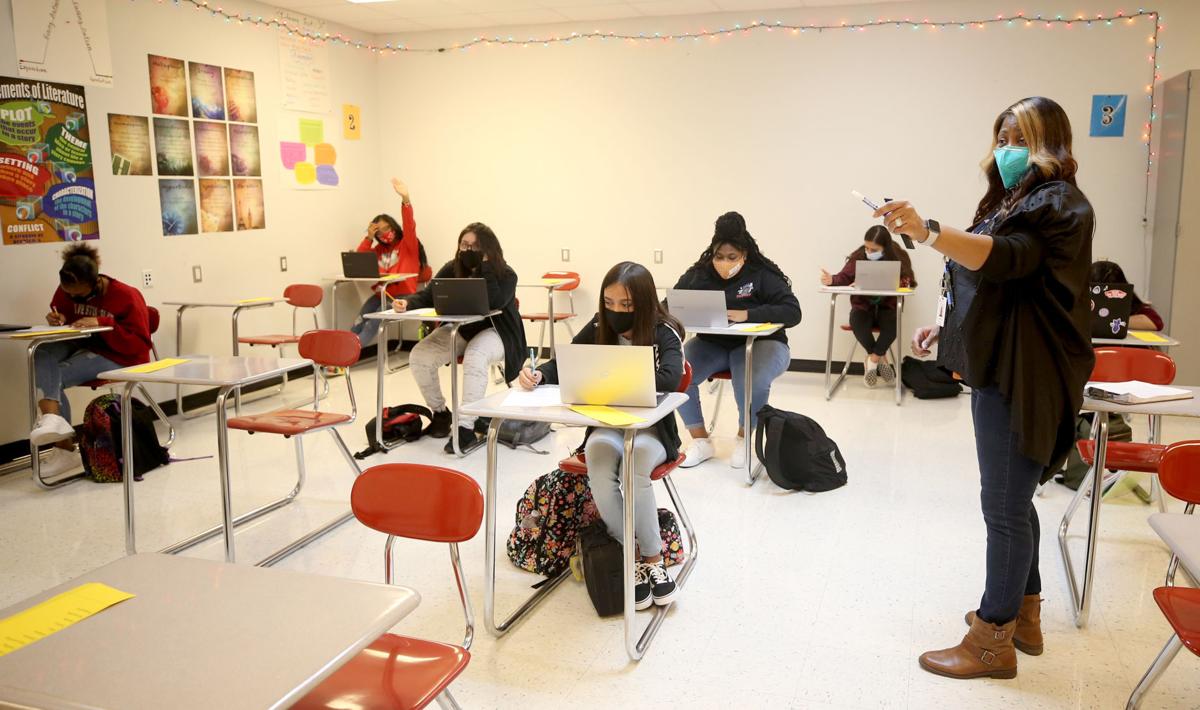 LaQuita Rhone, left, has her students work on figurative language during her English class at Hitchcock High School on Thursday, Dec. 10, 2020. 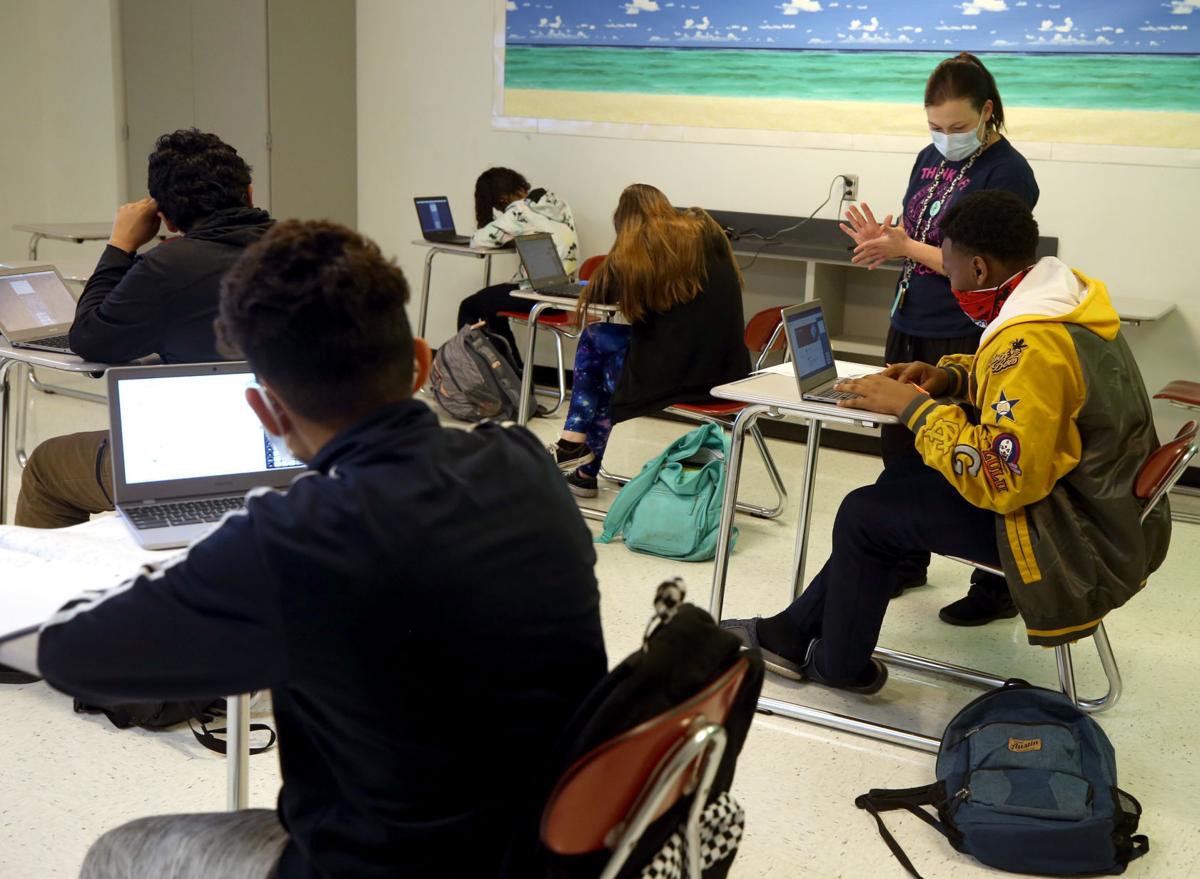 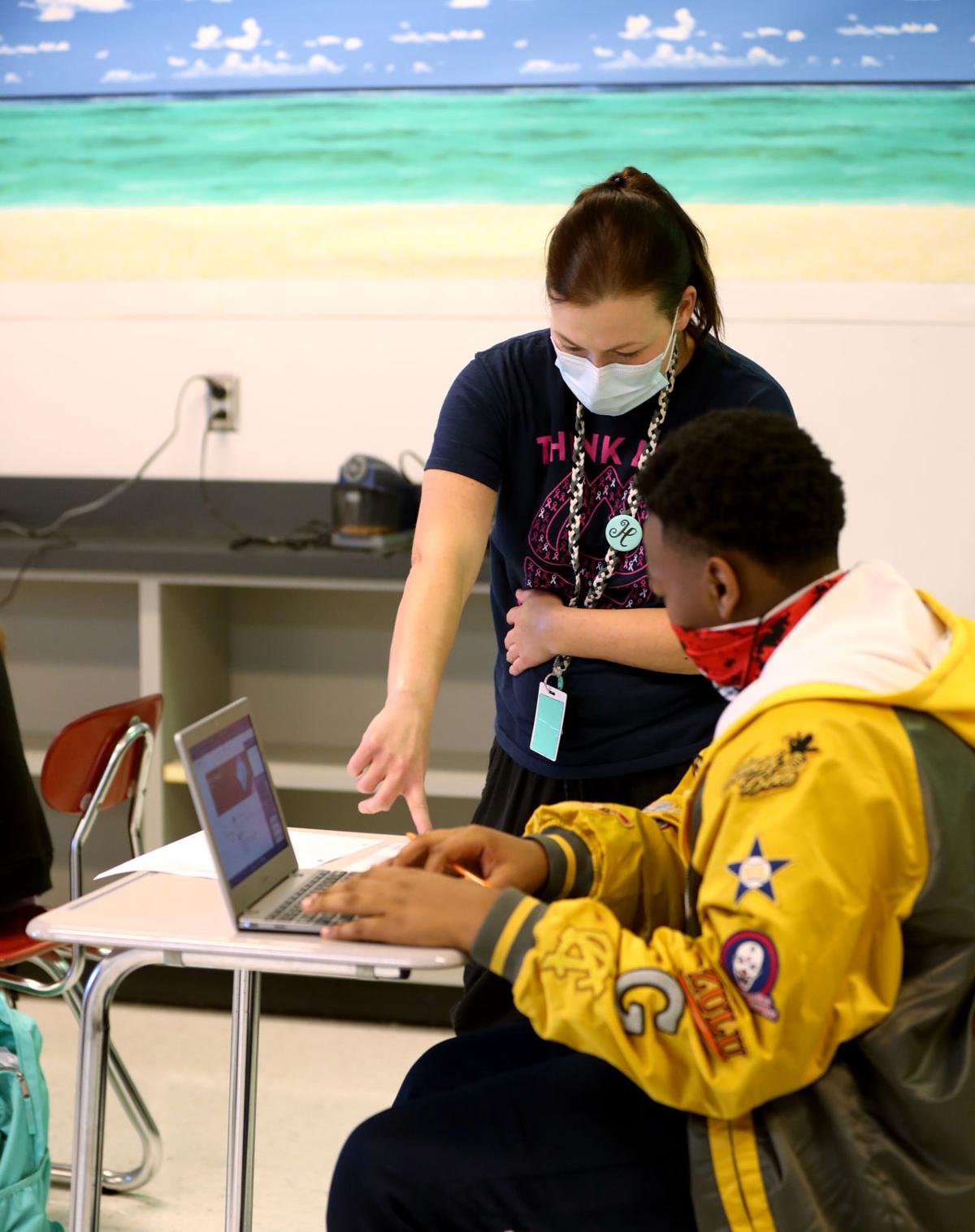 Elena Foulks, a sophomore at Ball High School in Galveston, does chemistry homework at her family’s dining room table Thursday, Dec. 10, 2020. Foulks, who is normally an A student, has found herself struggling with online learning this school year.

LaQuita Rhone, left, has her students work on figurative language during her English class at Hitchcock High School on Thursday, Dec. 10, 2020.

Steve Cooley, a single parent, is proud of both of his children — his 13-year-old son and 16-year-old daughter. Before this year, his eldest child was in the top 6 percent of her class and active on the soccer team, he said.

But after the most recent grading period in this most unprecedented of years, she found herself failing four of six classes, he said.

“This is all starting to weigh on kids,” Cooley said of the coronavirus pandemic. “And it’s getting worse — the anxiety, the depression, the sense of social isolation.”

The number of students struggling academically and failing classes this year — even falling from honor rolls — has increased astronomically over previous school years, with parents and experts blaming online schooling, pandemic-related anxiety and a lack of family involvement and supervision to ensure children are completing assignments.

The problem has become so dire, school districts across the county are asking hundreds of students who are studying remotely to return to classrooms if they’re among those failing classes.

In Galveston Independent School District, for instance, more than 59 percent of high school students failed a class for the first or second grading periods of the year, up from 31.5 percent in the previous school year, according to data provided by Billy Rudolph, spokesman for the district.

Some districts, in response to a Texas Education Agency guideline, have been reaching out to students struggling with online learning to request they return to in-person classes.

But for some experts, the issue is more complicated than laying blame for academic struggles solely on the move to online education.

“What we’re seeing is that kids that do not attend class regularly, and are trying to do everything on their own, are struggling,” said Julia Ramirez, Galveston’s director of the remote learning program for seventh through 12th grade students, called the SAIL program. “But if you have students show up for every class on Zoom, they’re knocking it out of the park.”

School district leaders across Galveston County and the country, however, find themselves in an unenviable position — trying to manage student academic achievement while also maintaining safety during a pandemic.

“It’s hard in their position, when you have this many people, to make decisions suitable for everyone,” said Stacy Foulks, whose daughter attends high school in Galveston.

Foulks’ daughter is more self-motivated than many students and has maintained a strong academic record through the pandemic, but she’s struggling more than she has in previous years, Foulks said.

“She’s struggling and the hours of work seem longer,” Foulks said. “Of course, it’s a little hard to gauge because she’s in her sophomore year, which is usually harder anyway.”

Foulks understands the need for students to have in-person interaction and how classes can help teach material better but also is concerned about the possibility of spreading the coronavirus should students return in large numbers before it’s safe, she said.

“Our responsibility is to educate students, I understand that,” she said. “But I keep thinking about the scenario of someone picking it up and bringing it home, where they live with their elderly grandparents. And it spreads around.”

Some Galveston County school districts have taken active measures to bring students back in-person because of the increased number of those struggling with classes.

Hitchcock, for instance, has recalled about 150 students struggling academically after making phone calls, sending letters and home visits, Superintendent Travis Edwards said. State guidance is that district administrators should do so any time a student has a class average of less than 70 percent in three or three or more unexcused absences.

“It was far too many students to be struggling, much more than usual,” Edwards said.

Clear Creek, likewise, has contacted more than 720 students who are failing two or more classes to invite them back to campus, said Elaina Polsen, spokeswoman for the district. Families could opt out for medical reasons, however, and as of Tuesday 162 of the families have requested to remain online.

For parents like Cooley, despite the complexities large entities face, in-person classes are necessary to ensure student success, academically and socially, he said.

“Kids have got to have interaction,” he said. “This is a social generation. They expect all students to be self-motivated and driven. With adults, I get that. But it’s a lot to expect of a 16 year old.”

Learning is difficult when children are left largely alone to complete homework while parents have to work, Cooley said.

La Marque High School had increased the number of students that appeared on the A honor roll each year since Texas City Independent School District annexed it, said Melissa Tortorici, spokeswoman for the district. In 2017, 21 students earned As all year.

But after the first nine weeks this year, only six students were earning all As, Tortorici said.

Students in the district have several options to improve their grades, including extra tutoring, turning in late assignments and remediation work, Tortorici said.

Local school districts received a bit of a reprieve this week as the Texas Education Agency announced it would pause district A-F ratings this year, though the student standardized tests would continue, officials said.

Under the Texas Education Agency’s system, schools and districts receive letter grades of A to F based on different factors, such as student achievement scores, closing the achievement gap among student groups and other factors.

Gov. Greg Abbott has previously waived district requirements handing out letter-grade ratings because of irregularities after Hurricane Harvey, which caused mass flooding in 2017.

I know a family with a fourth grade student in GISD. I have helped a bit in tutoring and going over corrections in assignments. If you haven't done that you have no idea how much harder it is to accomplish anything than in-person learning.

It is hard enough to motivate and guide students sitting in a classroom in front of you. Trying to have that same presence online with a classroom of distance learners on ZOOM is nearly impossible. It's the difference between a child raising his or her hand and asking a question with an immediate answer vs. sending messages that must be flooding in to teachers. Instead of easy interaction to find and focus on the difficulty, you can have a stream of messages just to do what can be done in a few minutes of classroom interaction. And by the way, anyone who thinks the ZOOM sessions are glitch free is delusional. Problems on the server side and problems on the user connection side are common.

The forced social isolation of children who have almost zero chance of getting sick from Covid is horrendous. Remember when everyone was saying you have to do whatever is necessary to keep Grandma and Grandpa from getting sick? Who decided just about every American schoolkid gets to be the sacrificial goat for this experiment?

High school students are having an extremely hard time. There are not enough teachers for both in person and virtual so the virtual students get shafted. That's great if the kids who go to zoom classes are doing great but not every virtual student is getting that opportunity.