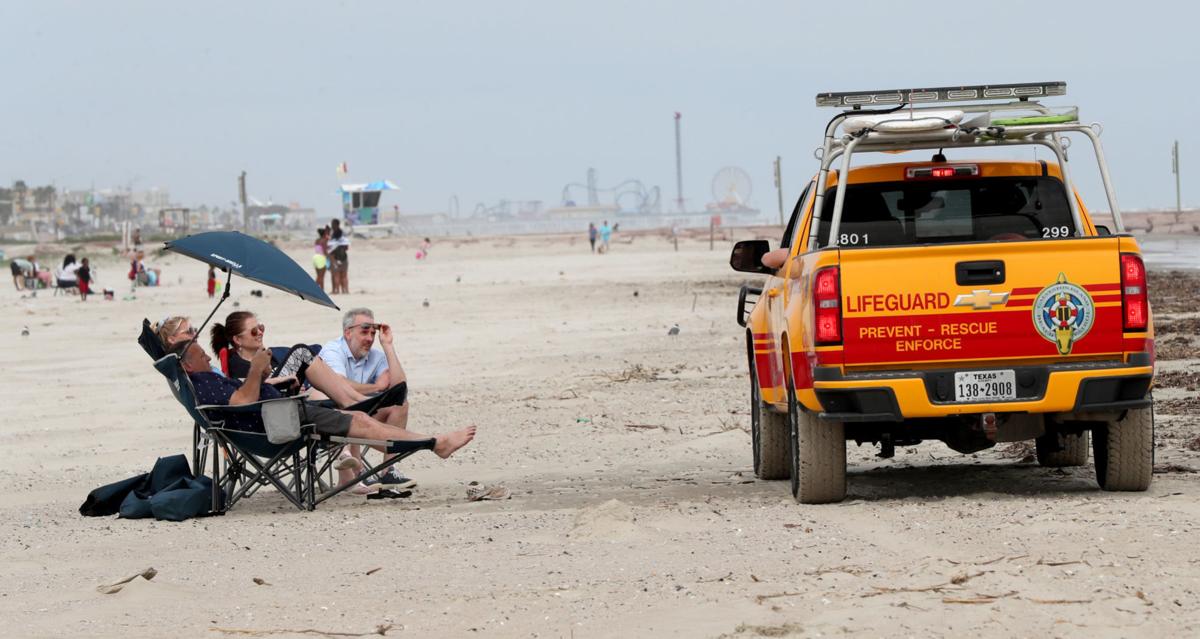 Galveston Island Beach Patrol lifeguards inform Vince Markwalter, his wife, Wendy, Bill Leavitt and his wife, Kimberly, that the beaches have been closed in response to the coronavirus pandemic in Galveston on March 29. 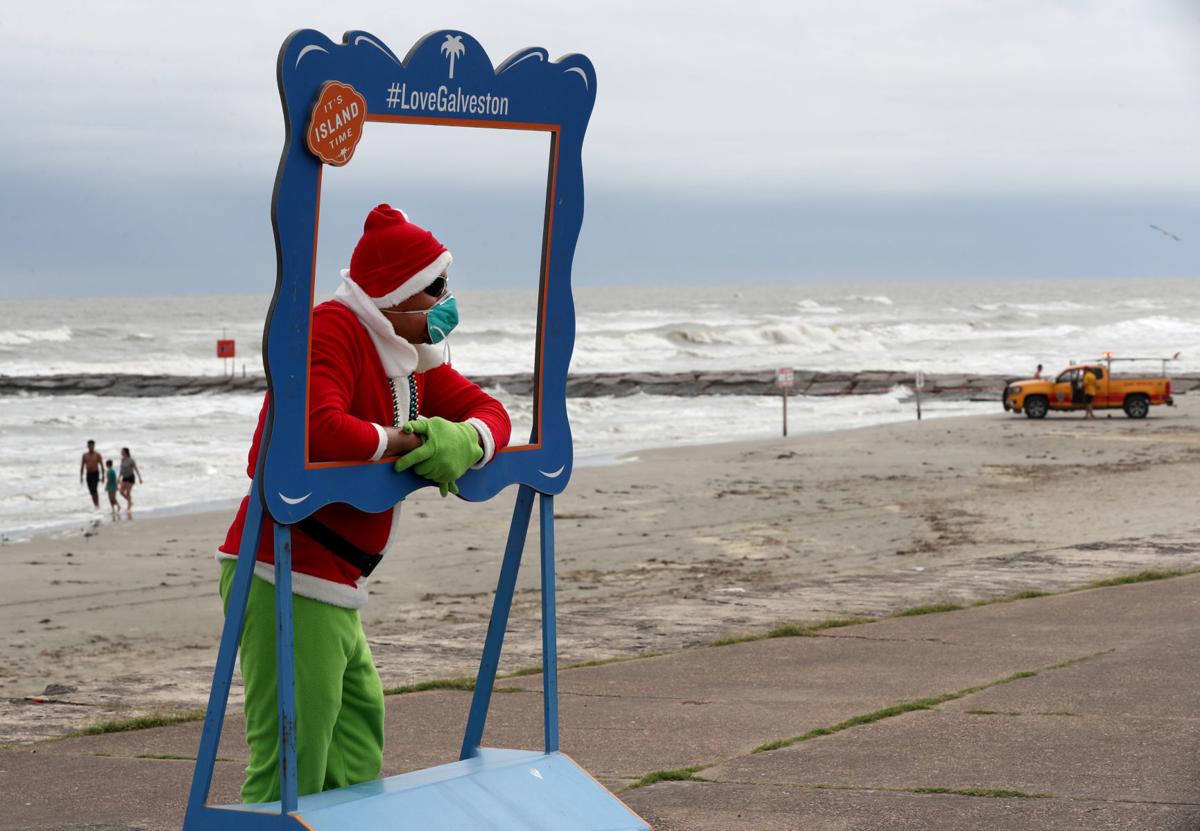 Polo Rivas, dressed as the Grinch, poses for photos on the seawall as lifeguards with the Galveston Island Beach Patrol inform beachgoers the beaches have been closed in response to the coronavirus pandemic Sunday, March 29, 2020. Rivas, who struck poses for people passing by, was just trying to get people to smile, he said. 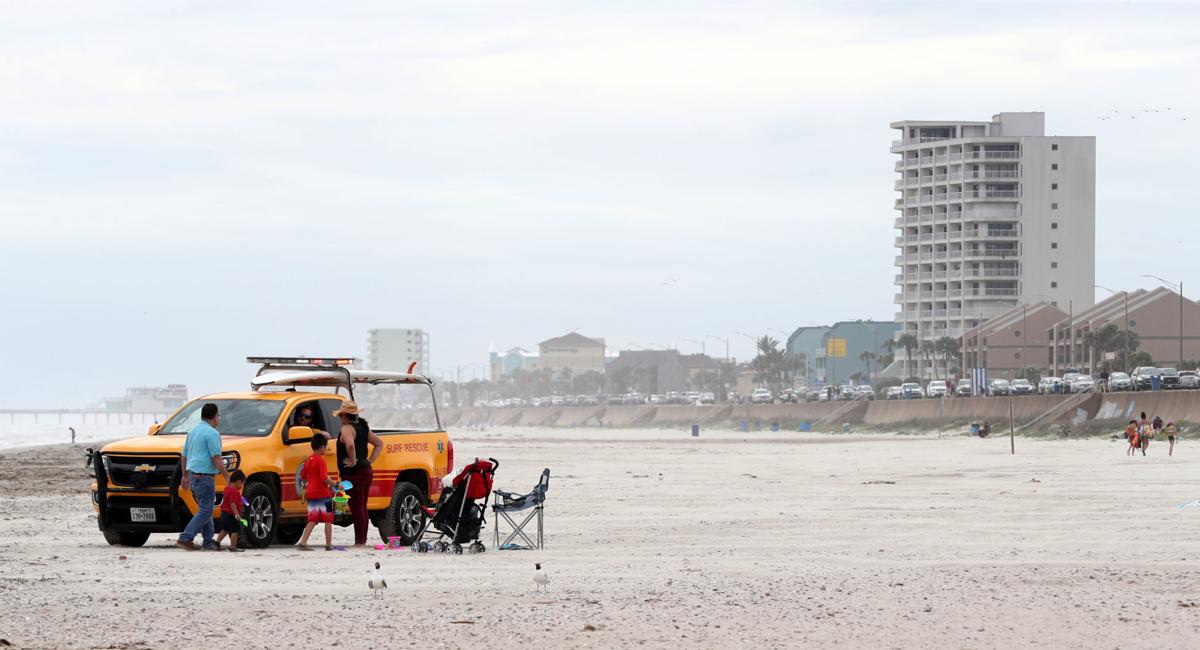 Galveston Island Beach Patrol lifeguards inform a family that they will have to leave the beach near 69th Street in Galveston on Sunday, March 29, 2020. City officials ordered all public beaches closed in response to the coronavirus pandemic.

Galveston Island Beach Patrol lifeguards inform Vince Markwalter, his wife, Wendy, Bill Leavitt and his wife, Kimberly, that the beaches have been closed in response to the coronavirus pandemic in Galveston on March 29.

Polo Rivas, dressed as the Grinch, poses for photos on the seawall as lifeguards with the Galveston Island Beach Patrol inform beachgoers the beaches have been closed in response to the coronavirus pandemic Sunday, March 29, 2020. Rivas, who struck poses for people passing by, was just trying to get people to smile, he said.

Galveston Island Beach Patrol lifeguards inform a family that they will have to leave the beach near 69th Street in Galveston on Sunday, March 29, 2020. City officials ordered all public beaches closed in response to the coronavirus pandemic.

In an unprecedented move, the city on Sunday closed beaches to the public and banned vehicular traffic from the West End beaches as it continues to deter visitors and public gatherings.

City officials had hoped to avoid such a drastic measure, but large crowds have continued to flock to island beaches despite efforts by Galveston leaders to discourage tourism to combat the spread of coronavirus, they said.

The measure pertains to locals, also.

Mayor Jim Yarbrough signed the orders Sunday, which prohibit people from walking on the beaches as of 2:45 p.m. Sunday and ban cars, trucks, golf carts, motorcycles and mopeds from accessing the beach from FM 3005.

“I hate to do it for locals, but we’ve got to do it,” Yarbrough said.

The seawall will remain open to pedestrian and bicycle traffic, Yarbrough said.

The city kept the beaches open as long as it could, and Galveston’s beaches were among the last major stretches to close, City Manager Brian Maxwell said.

But out-of-towners wanting an escape from stay-at-home orders continued traveling to Galveston beaches, even after city leaders sent clear messages over the past two weeks that this wasn’t the time to visit.

All week, crowds of people visited the beaches and droves of people strolled along the seawall.

The city might have been able to hold off on the order if the weather hadn’t been so nice this weekend, Maxwell said.

It wasn’t just people from Houston, Maxwell said. People also had traveled from out of state to visit the island, he said.

“They kind of ruined it for everybody,” Maxwell said.

The city will enforce the orders with Galveston police and city marshals, with the help of Galveston Island Beach Patrol, Maxwell said.

Those found violating the order will be charged with a Class C misdemeanor, which allows fines of up to $500, according to the order.

The city will place barriers at some of the more popular access points, Maxwell said.

The city placed barriers at Sunny Beach and Hershey Beach on Saturday night and at the rest of the West End access points Sunday morning to deter cars from driving on the beach, Maxwell said.

Although Galveston beaches are overseen by the Texas General Land Office, local governments can close beach access points for emergencies related to public safety, land office spokeswoman Karina Erickson said. Coronavirus would be considered such an emergency, she said.

Beaches across the country, including South Padre Island, Miami Beach, Fort Lauderdale, Boca Raton and Hallandale Beach, have closed to the public as tourism officials try to discourage people from gathering in crowds.

That recommendation hasn’t come yet, but the county is sending a sheriff’s deputy to peninsula beaches to assess the crowds, Davidson said.

Since the city declared a state of disaster March 16, it has closed bars and tourist attractions, limited restaurants to drive-in or take-out, shut down fishing piers and prohibited hotels, short-term rentals and bed-and-breakfasts from renting to most people. The measures are all in an effort to discourage tourists from visiting the island, officials said.

“We have tried to take systematic steps over the last week to reduce the island of tourists, and we’ve had some success, but we’re still getting day-trippers,” Yarbrough said. “We encourage you not to come.”

The orders are in effect for seven days. The Galveston City Council has a meeting planned Friday to discuss extending any orders the mayor declares.

This is not a drill.

How is legally crowding everyone from joggers to bicyclists to strollers onto a 16 ft. wide strip of concrete a healthier situation than people spread all over the wide sandy beaches we have? I was at the beach three times this past week and saw small groups of people enjoying the sun and salt air as far as the eye could see in either direction. Not one was in closer proximity than we already are in a line at Kroger.

How are these decisions arrived at? The World Health Organization says the virus is mainly transmitted through surface contact then touching one's face and droplets from those who are sneezing or coughing. The chances of you getting it just by breathing near someone with it while you are outdoors in sunshine and fresh air is vanishingly small.

Now I know what it must have felt like to live in Salem during the witch trials.

your right... a less likely chance to catch the virus breathing in salt air while strolling the beach. The problem is that at least 35% or more of these visitors are also stopping at other public places while visiting the beach and touching objects thus spreading the dang virus. The more people stay away like asked the better & safer we and our community will be, , Thank you

Now... maybe people will stop coming here, stay home then the sooner we can get back to normal. In the mean time. WHAT ABOUT BOLIVAR PENINSULA????? The short term rentals are active as ever with people checking into vacation rentals daily. I was told there were no laws in place to shut it down. BULL.... you get the Governor on the phone and get him to order it shut down. PLEASE !!!!

If only there was some way to limit access to the island to people who actually live or work here! Of course, there is no historical precedent for that at all, is there? Anyone?

Walter posts, "If only there was some way to limit access to the island to people who actually live or work here! " There is historical precedent: After hit by a hurricane officials limited entry to those who live or work on the island.

"To get on the island you must have identification that shows you live in Galveston. Returning residents should expect long lines and heavy traffic as officers check every car before they allow it on the island."

"Galveston residents and business owners who want to enter the island to survey damage to their property must have proof they live or work in Galveston."