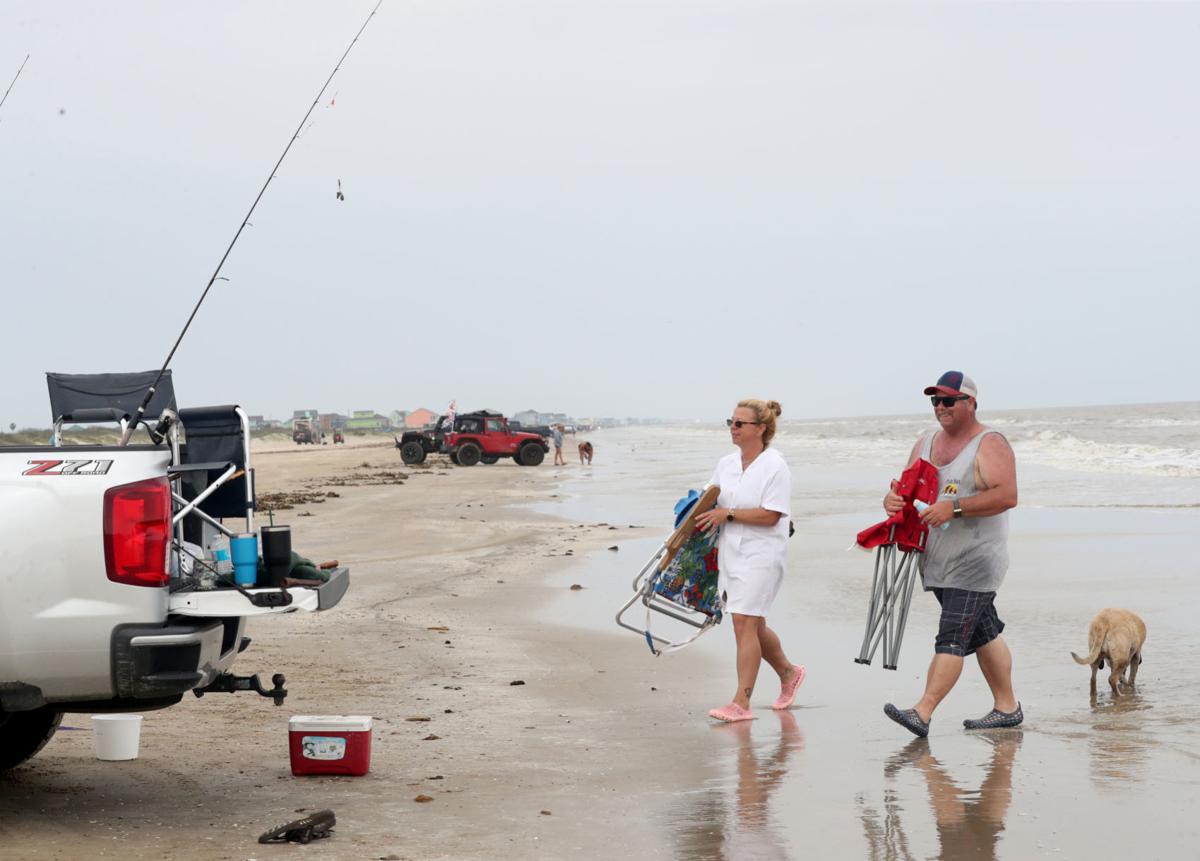 Angela Vitello and her husband, Nick, pack up their beach chairs after an afternoon of fishing on the beach near West Lane in Crystal Beach on Wednesday, April 8, 2020. Galveston County officials announced they were closing the beaches along the Bolivar Peninsula starting Friday until at least April 17. Vitello, a nurse, had planned to spend the weekend at the beach before heading to Queens, New York, to work at a hospital at the epicenter of the coronavirus pandemic. “The beach is my peaceful place, where I come to decompress,” she said. 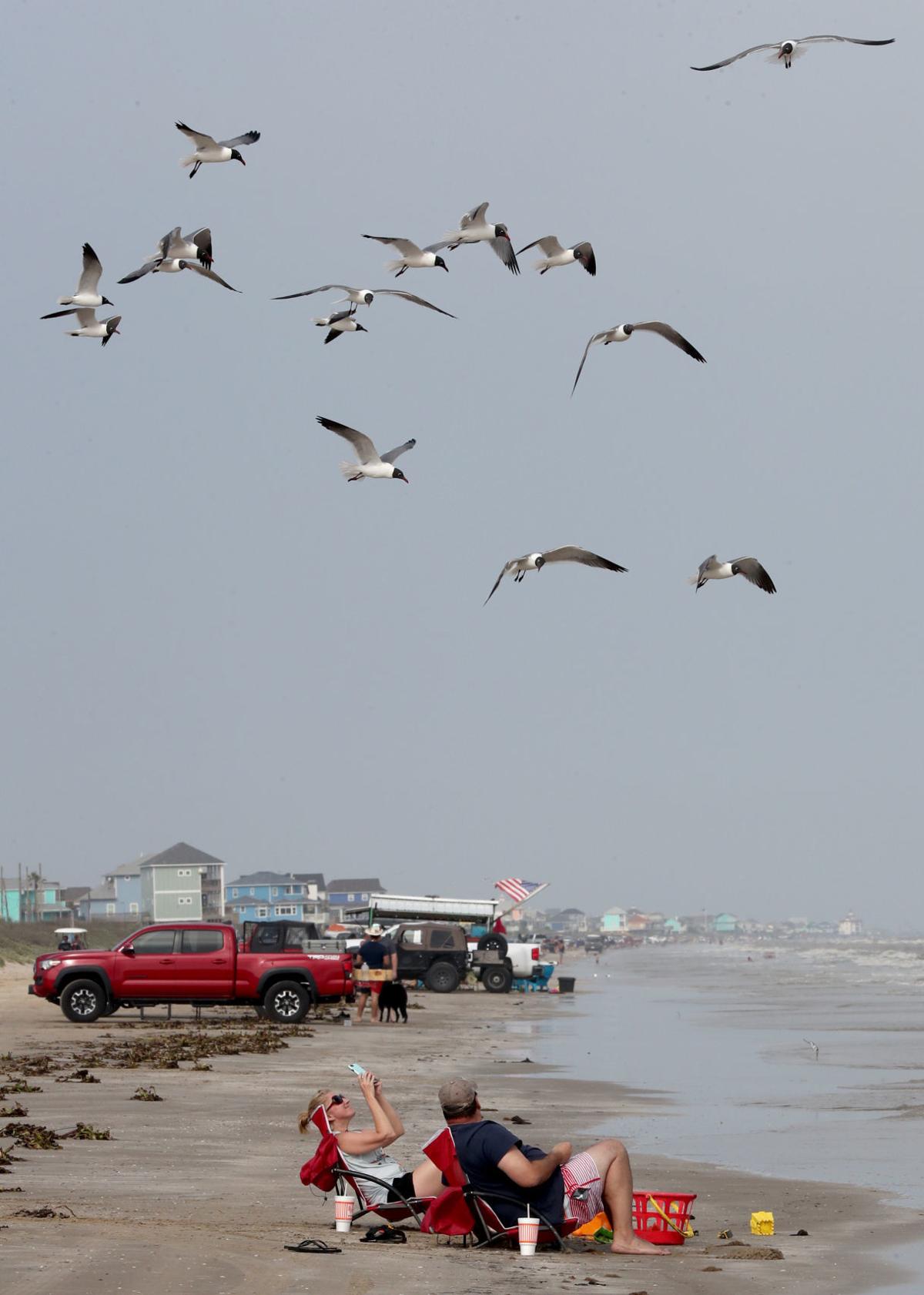 RIGHT: Lesleigh Amedee photographs gulls that her husband, Neil, had been feeding in Crystal Beach on Wednesday. Galveston County officials announced they were closing the beaches along the Bolivar Peninsula starting Friday until at least April 17.

Angela Vitello and her husband, Nick, pack up their beach chairs after an afternoon of fishing on the beach near West Lane in Crystal Beach on Wednesday, April 8, 2020. Galveston County officials announced they were closing the beaches along the Bolivar Peninsula starting Friday until at least April 17. Vitello, a nurse, had planned to spend the weekend at the beach before heading to Queens, New York, to work at a hospital at the epicenter of the coronavirus pandemic. “The beach is my peaceful place, where I come to decompress,” she said.

RIGHT: Lesleigh Amedee photographs gulls that her husband, Neil, had been feeding in Crystal Beach on Wednesday. Galveston County officials announced they were closing the beaches along the Bolivar Peninsula starting Friday until at least April 17.

Galveston County will close 27 miles of beaches on Bolivar Peninsula to residents and visitors beginning Friday, the county announced Wednesday.

The closures are part of an attempt to keep crowds away from remote county beaches over the Easter holiday weekend, officials said.

The order closing the beach goes into effect at 12:01 a.m. Friday, according to the county.

The closure will remain in place until at least April 17, according to the order.

The order applies to both residents and people visiting from elsewhere, said County Commissioner Darrell Apffel, whose precinct includes the peninsula. Sheriff’s Office deputies will be patrolling and ordering people off the beach, Apffel said. People who refuse to leave the beach after being warned away will be fined up to $500, according to the county’s order.

“We believe it’s the best course of action in order to meet the health and safety expectations for the citizens of the state and the county,” Apffel said.

The county’s closure comes 11 days after the city of Galveston closed its beaches to residents and tourists. After the city’s closure, county officials said they were hesitant to take similar measures on Bolivar Peninsula because they had not seen large crowds there and were fearful of dealing another blow to the area’s tourism-driven economy.

“I was trying to balance the risk against the commerce that was left on the peninsula,” Apffel said.

The county changed its posture after Texas Gov. Greg Abbott announced the closure of Texas state parks and monuments.

Rain is expected this weekend, according to weather forecasts, but Apffel said there was still concern crowds would form on beaches Easter Sunday.

“With a three-day weekend and nobody in church, it concerns me that we might have the crowds,” he said.

Closure decisions will be made on a week-by-week basis, Apffel said.

It’s possible that closures could exist in some form into the middle of May, until the annual Jeep Weekend beach party, he said. Jeep Weekend is scheduled to begin on May 16.

The peninsula closure means only one beach access point in the county might be open this weekend. As of Wednesday afternoon, the beach access point in the small city of Jamaica Beach, in the middle of Galveston Island, was still open and people were still able to walk on the beach, City Administrator Sean Hutchinson said. The city has closed off vehicle access to the beach since March 31.

Has the state refused to allow closures only on the weekend? Clearly, this beach is not crowded during the week. And even Galveston only had a problem on weekends.

I urge the paper to send a photographer when there's a crowd - there's only photos of a beach displaying good social distancing whenever theses articles run, so it looks like they're closing the beaches just because they can.

They are closing the beaches because our neighbors have formed a "Covid Gestapo"! These individuals are so frightened of the virus that they are willing to leave the safety of their homes and report any assembly going on anywhere, whether social distancing is being practiced on not.

Prior to beach being closed I saw several individuals walk to the beach entrance look around and then leave.

When neighbors start reporting neighbors for the "greater good" or to be "superior citizens" in the eye of the government that is a serious problem when it inhibits our rights.

Talk to a City or County elected official and that is what is causing many of the closures. Specifically golf courses, fishing piers and beach.

Maybe they should not allow parking or people to walk along the sea wall.

Do something even if its the wrong thing to do? Bureaucrats!

I have two additional questions:

1). The virus may be oral fecal. What is the impact on recreational beach waters and sand? Does the virus stay viable in salt water or sand?

2). Resort communities have become hot spots of activity because of people fleeing the cities. What is the impact on our community from surrounding communities that haven’t closed their beaches or short term rentals?

There is no suggestion that problems from open beaches are related to transmission via the water or the sand. Scientists (of which I'm one, retired) will never says its impossible - just that its very very very unlikely and not something to worry about. If someone suggests that it happens, they'll need lots of proof before any of the scientists/physicians believe it, if they ever do. So don't worry about transmission via sand or the sea.

What the politicians say that they are worried about are two things:

2) the fact that beach goers may stop at the convenience store or grocery store or get take out food before they leave town and that these contacts with the locals may increase transmission..

Susan, thanks for responding.

#1 - Does the virus stay viable on sand or salt water? Yes or no? Or there is no definitive answer at this time.

If yes, how long. We have general time answers of viability on paper, metal, plastic, etc. and touching your face without using soap or sanitizer. What about viability in sand (e.g. playing in the sand after an infected person, or through contamination by untreated waste)?

I’ve been against opening the beaches because of large crowds congregating and passing through causing increased risk through person to person droplet and potentially airborne transmission, but was wondering about the surfaces people touch when using the beach (handrails, bathrooms - one hopes not the water, sand, etc).

Going to the beach is not an essential activity, and not in keeping with the stay at home orders. Harris County has the highest number of cases in the State, about 27% (yesterday's information). Like it or not, we are part of a region. Encouraging people to stay home in their own community is the intent of the orders.

I read about the increasing numbers in Harris County, the closing of Parks, and Governor Abbot’s concern yesterday.

The Seawall is also a park (paid parking), and should be closed if people are sitting and congregating.

If you feel the need for some fresh air and sun Bay Street park in TC hasn't been closed yet. Several miles of bike and walking/jogging trails. I noticed a couple of families fishing in the lagoon. Not sure if they were catching but bass and catfish are there.