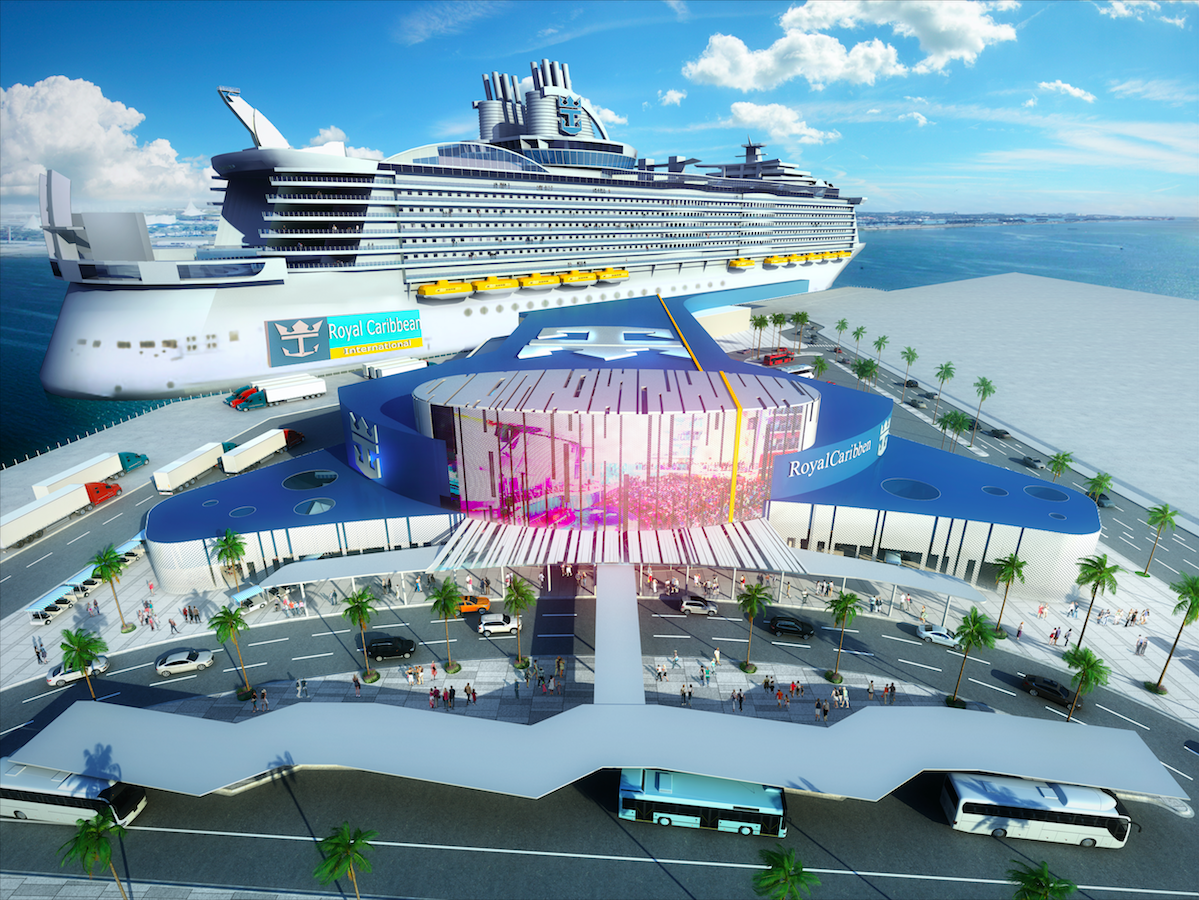 A Port of Galveston rendering shows a proposed design for the $100 million cruise terminal at Pier 10.. The wharves board has agreed to give Royal Caribbean another year to commit to the project.

A rendering provided by the Port of Galveston shows a proposed design for the $100 million cruise terminal at Pier 10 in Galveston. Royal Caribbean has asked for an extension to set off construction for a year.

A Port of Galveston rendering shows a proposed design for the $100 million cruise terminal at Pier 10.. The wharves board has agreed to give Royal Caribbean another year to commit to the project.

A rendering provided by the Port of Galveston shows a proposed design for the $100 million cruise terminal at Pier 10 in Galveston. Royal Caribbean has asked for an extension to set off construction for a year.

Royal Caribbean Cruises has asked the Port of Galveston for a yearlong extension to begin construction on its new $100 million cruise terminal.

Port Director Rodger Rees informed the Wharves Board of Trustees about the company’s request Friday afternoon and included information about it in the board’s agenda packet for a planned meeting on Tuesday.

The delay isn’t official yet, Rees said Saturday. The port and the company must renegotiate terms of their agreement, he said.

“We don’t know yet,” Rees said. “The thing we’re waiting on is the actual contract language. That’s where we are.”

Royal Caribbean has put a hold on all capital projects because of the cruise stoppages caused by the COVID-19 pandemic. The company still intends to build the new terminal, just not this year, Rees said.

Royal Caribbean has not run any cruises anywhere in the world since March 13 and this week announced it would not begin offering trips again until at least May 12.

Health officials in the United States have explicitly warned people about the dangers of traveling by cruise ship during the pandemic and have recommended that people defer such travel until the crisis has passed.

The financial hit from the suspensions of cruises could possibly halt plans to start building the highly anticipated terminal at Pier 10 if the wharves board, which governs the port, agrees to the extension. After a year of negotiations, the port in December agreed to allow Royal Caribbean to build the $100 million after a 120-day due diligence period.

The port and the company are working to adjust the terms of the contract, according to the board’s documents. Changes to the contract will be discussed more in an executive session during Tuesday’s Wharves Board of Trustees meeting.

The delay in building a terminal at Pier 10 could have some effect on the port’s planned capital projects over the next year. Rees said he wasn’t ready to comment about whether any work would be delayed and added that some projects, such as expansion on the port’s west end to create more space for cargo, would benefit the public docks with or without the new cruise terminal.

Delaying the terminal project a year could also mean changes to the port’s expected revenue in coming years.

Plans had been to complete the terminal by the fall of 2021, at which time the port would begin collecting $4 million in annual rent. The port also was anticipating increased revenues from having more ships docking both at the new terminal and at other berths vacated by Royal Caribbean ships.

Despite the full stop on the cruise industry, Rees said he believes Royal Caribbean and other cruise companies would rebound quickly after the pandemic threat passes.

Royal Caribbean on Saturday did not respond to questions about its plans for Galveston.

The wharves board is scheduled to meet at 9 a.m. Tuesday. The board will meet via videoconference because of social distancing measures put in place during the coronavirus pandemic.

Despite the full stop on the cruise industry, Rees said he believes Royal Caribbean and other cruise companies would rebound quickly after the pandemic threat passes.

I hope this is just stiff upper lipmanship. Because if Mr. Rees believes it, I would seriously question his judgement. The world is not going back to the status quo ante, definitely not soon and likely not ever.

We will be dealing with the financial fallout of this crisis--if we somehow manage to escape a depression--for years, and it will alter America irrevocably. Even with the horrendous impact this is having on many of our fellow Americans, it can still provide something positive by way of a forced opportunity to re-examine our lives and our values. It is time to rediscover the part of our national character that believed in helping others, saving for a rainy day, delaying gratification for greater rewards in the future, while understanding the fleeting nature of the myriad diversions we entertain ourselves with.

Mr. Rees, if you are reading this I encourage you to get out your phone and start dialing contacts under C for Cargo. The terminal will not be built. The cruise lines are begging Congress for cash and have been turned down because they are registered in foreign countries and pay about one (1) percent in taxes to the US. The congressional representatives from Miami (where all the large cruise lines are headquartered but not registered) have come out against a bailout for them. When you own congressional delegation is against you, you have made some major strategic blunders...as has the Port with its total fascination in tossing cargo overboard while celebrating the now invisible passengers.

While reviewing the Port's potential to continue getting income from cargo operations, I hope the staff will honestly advise the Wharves Board that their current major cargo tenant, Walenius Wilhelmsen Lines, has recently (25 Mar) announced the lay-off of 2,500 employees in the US and Mexico and they are putting 10 ships in deep lay-up while sending 4 other ships to the scrapyard. The WWL president says they are (in part) responding to the drop-off of automobile industry production so, that is likely to include the BMW vehicle center, as well as the other cargo operations at Pier 10. And, of course, it was to make room for Walenius to move their operations to the Pier 39-41 area that the Port just ran off two shipping companies' operations sending old automobiles to West Africa, a business that is unlikely to be impacted by a halt in new auto production. This would seem to be multiple shots fired in the same foot.