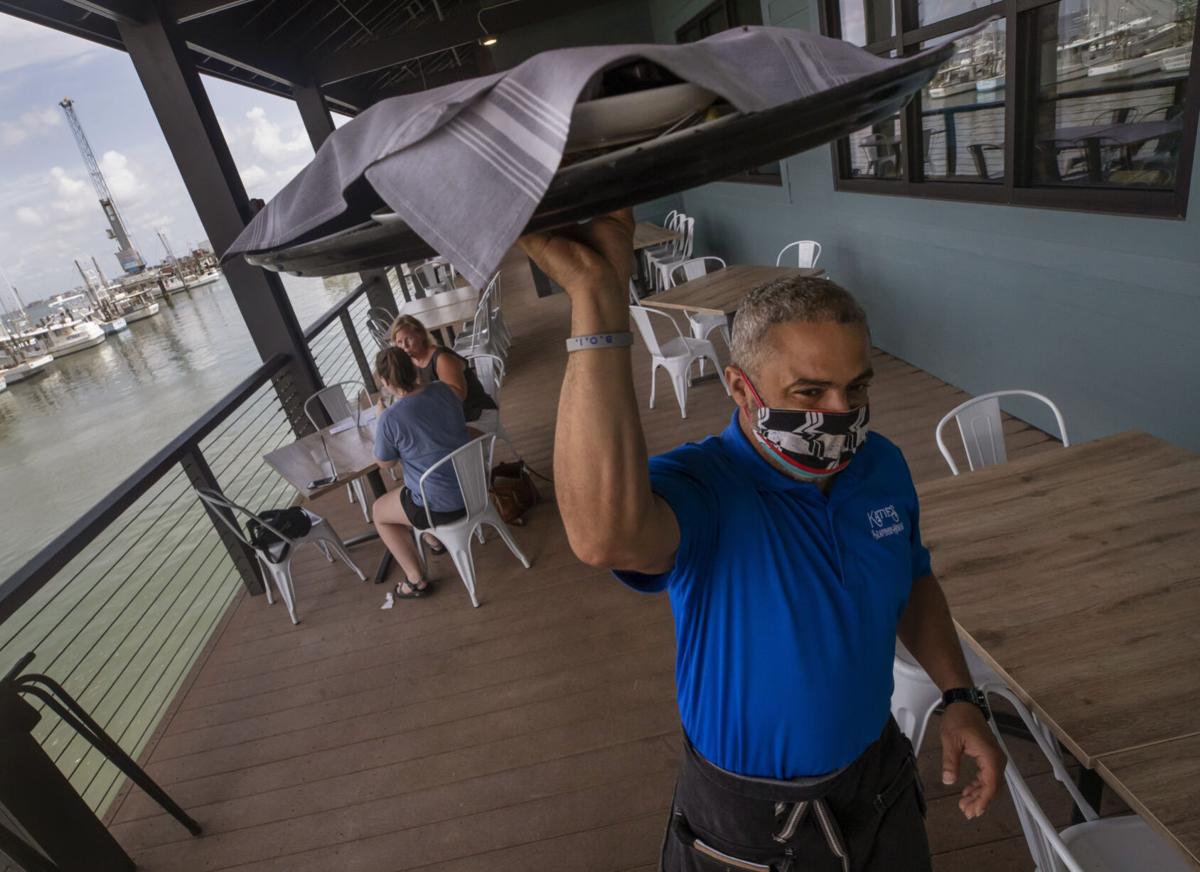 Katie’s Seafood House waiter Chance Weatherly clears tables on the deck at the restaurant in Galveston on Wednesday, Sept. 9, 2020. 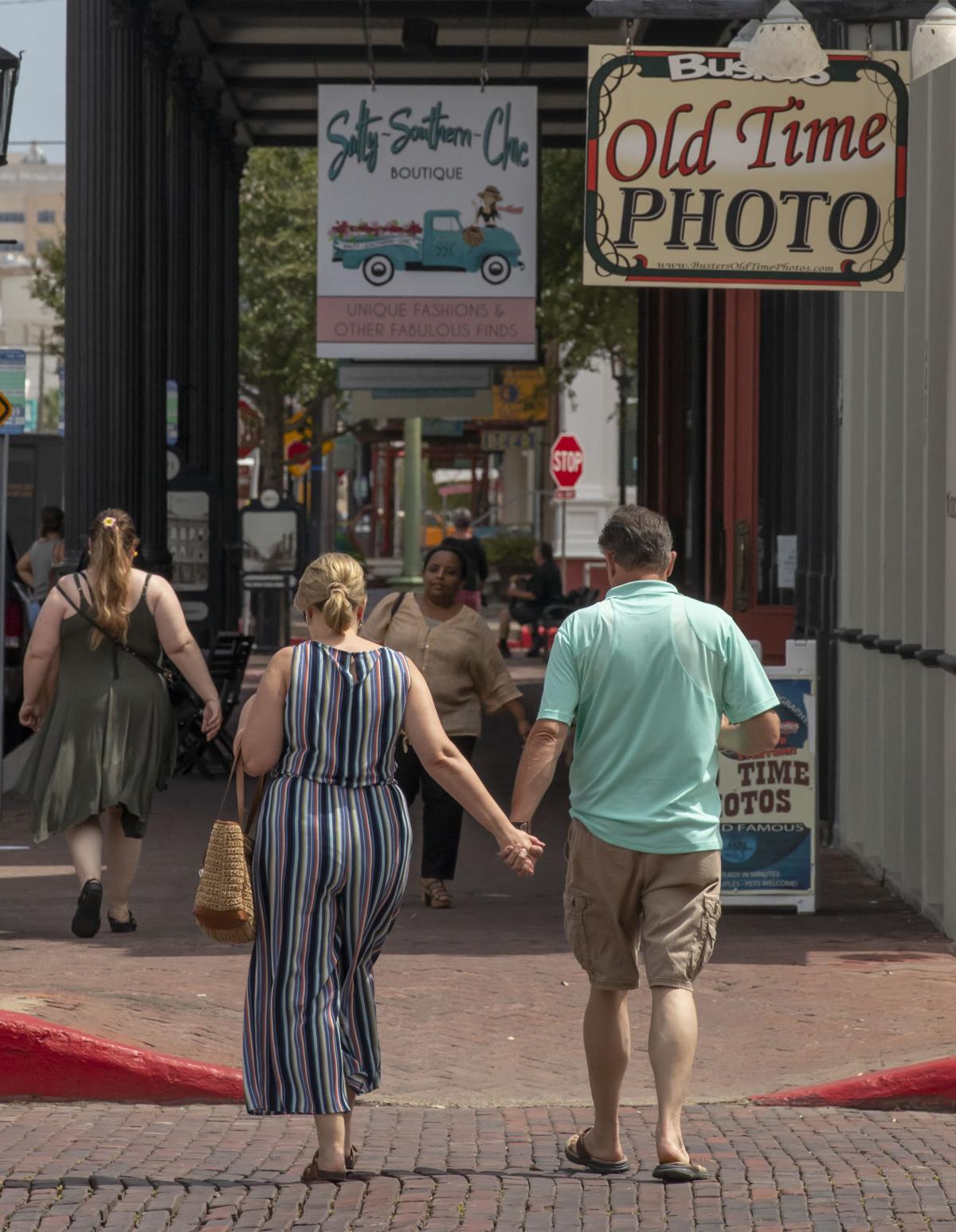 Shoppers stroll along The Strand in Galveston on Wednesday, Sept. 9, 2020. 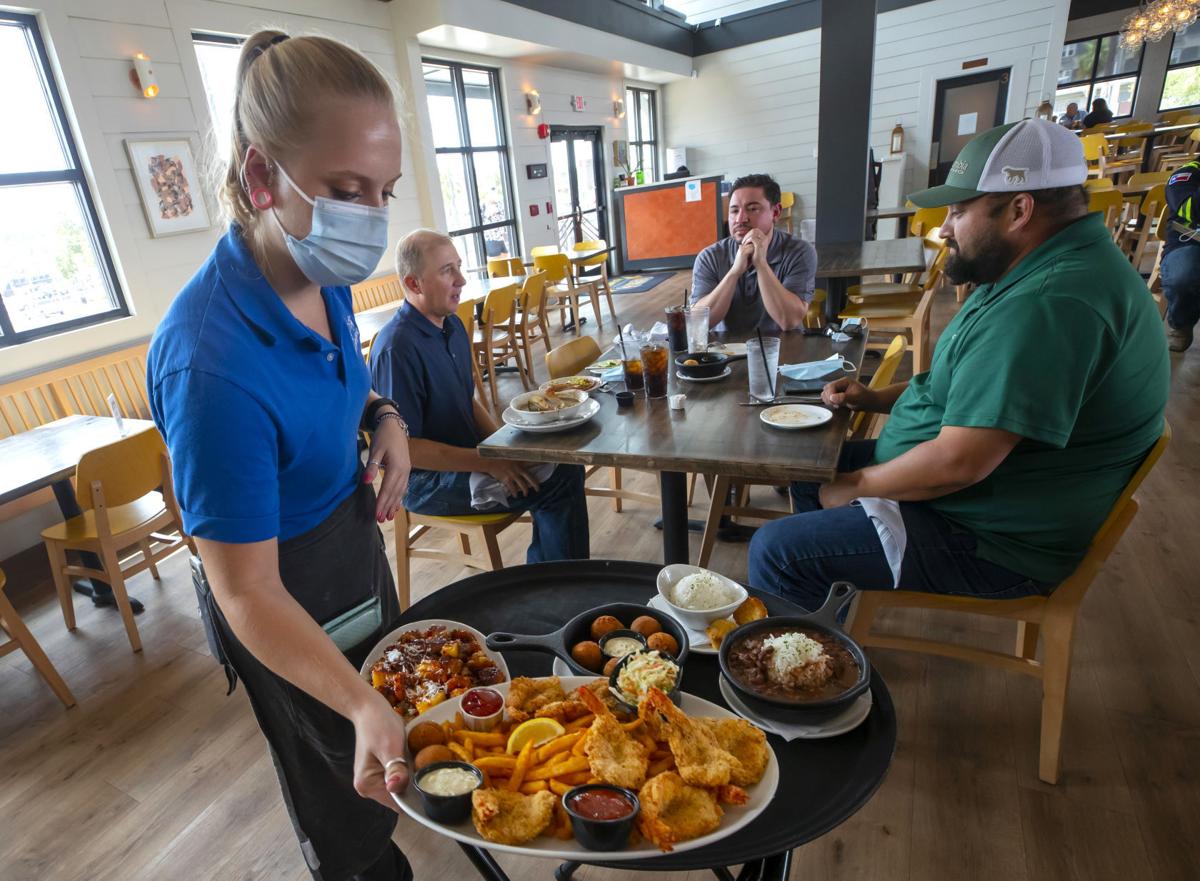 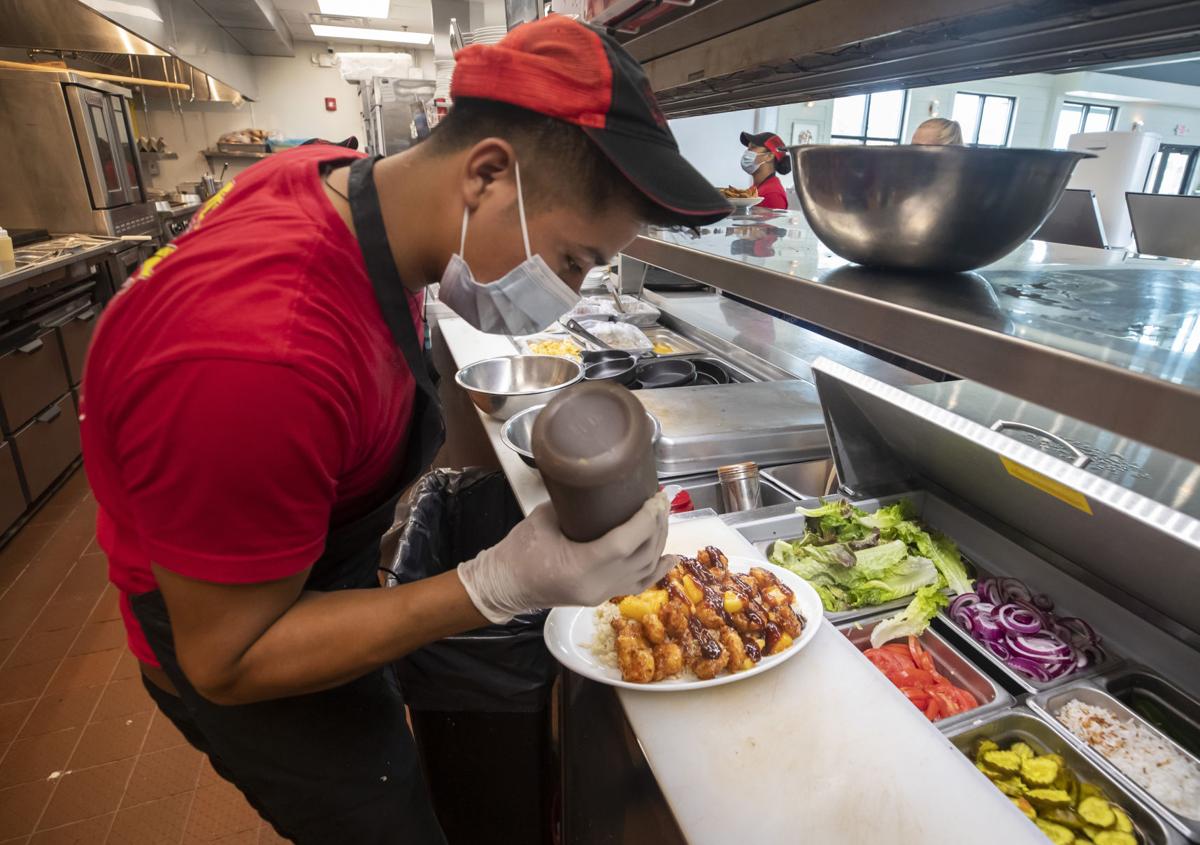 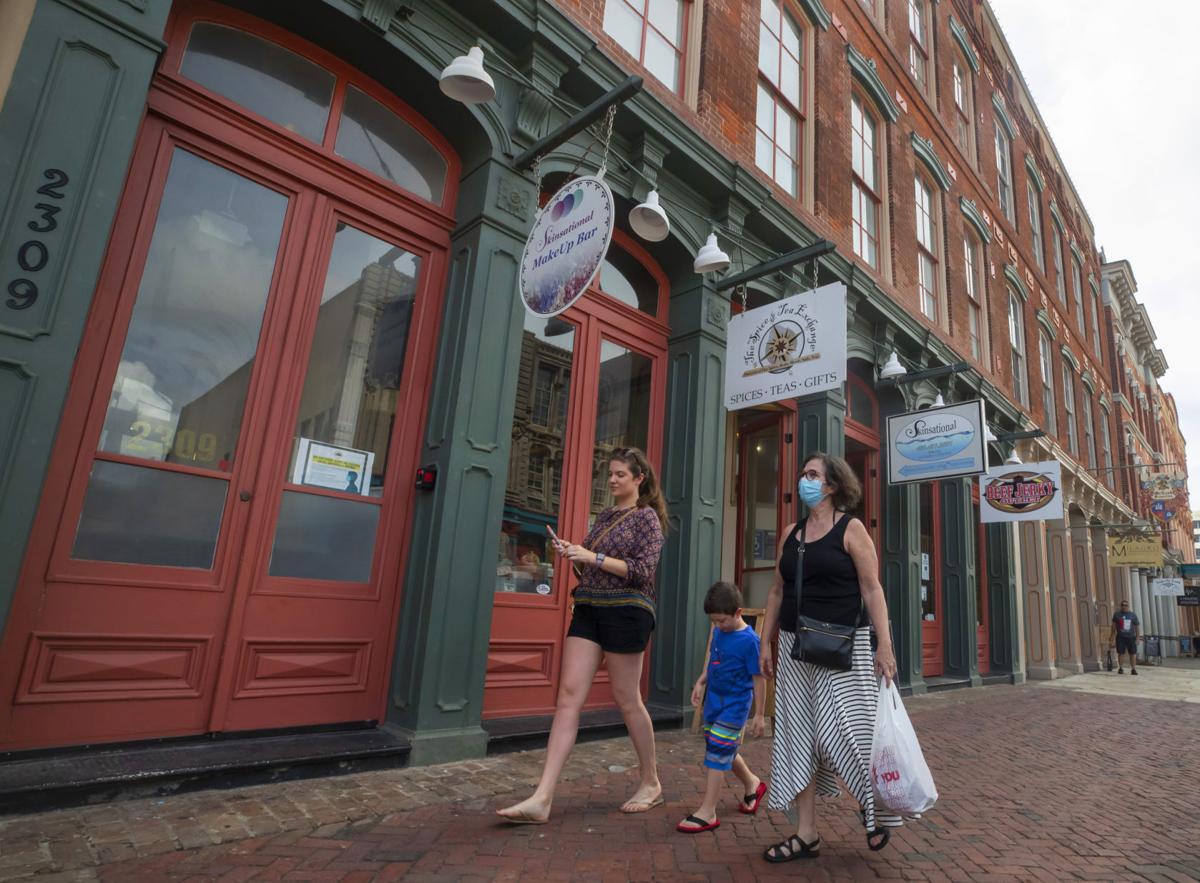 From left, Abigail Casanova, Andrew Casanova and Sherri Andrews stroll along The Strand while shopping in Galveston on Wednesday, Sept. 9, 2020. 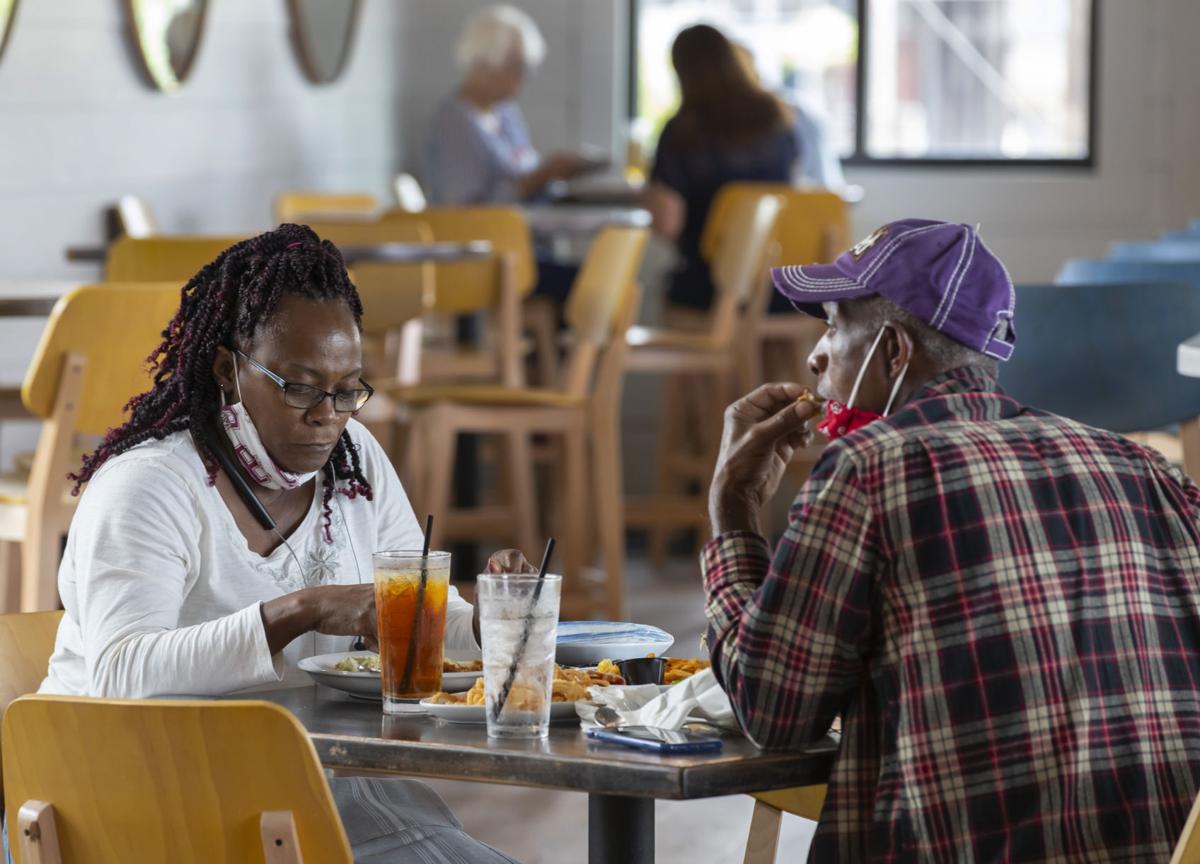 Barbara and Willie Collins eat in the dining room at Katie’s Seafood House in Galveston on Wednesday, Sept. 9, 2020. The couple is visiting Galveston from the Bryan-College Station area. 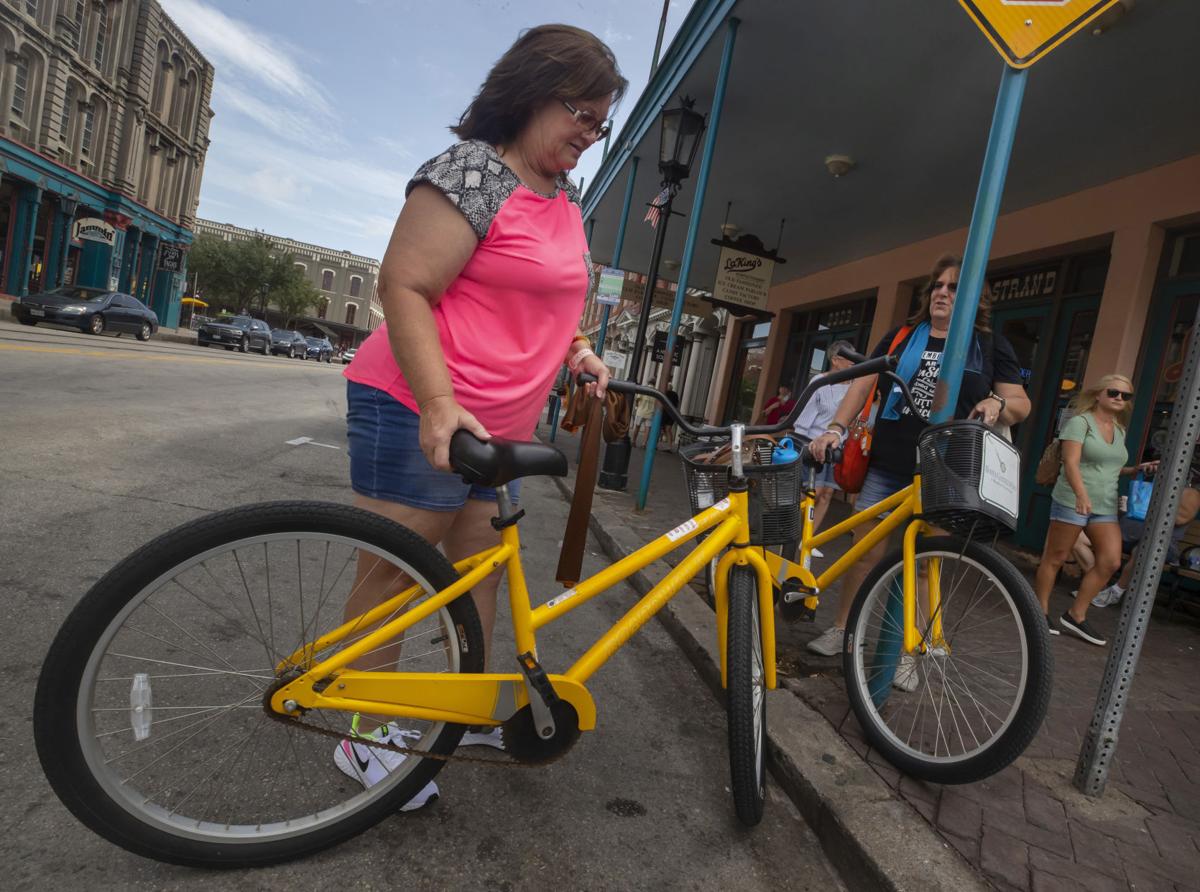 Friends Carol Taylor and Renate Harriss park their bicycles along The Strand in Galveston on Wednesday, Sept. 9, 2020. The pair is visiting the island on a week-long vacation.

Katie’s Seafood House waiter Chance Weatherly clears tables on the deck at the restaurant in Galveston on Wednesday, Sept. 9, 2020.

Shoppers stroll along The Strand in Galveston on Wednesday, Sept. 9, 2020.

From left, Abigail Casanova, Andrew Casanova and Sherri Andrews stroll along The Strand while shopping in Galveston on Wednesday, Sept. 9, 2020.

Barbara and Willie Collins eat in the dining room at Katie’s Seafood House in Galveston on Wednesday, Sept. 9, 2020. The couple is visiting Galveston from the Bryan-College Station area.

Friends Carol Taylor and Renate Harriss park their bicycles along The Strand in Galveston on Wednesday, Sept. 9, 2020. The pair is visiting the island on a week-long vacation.

This Labor Day weekend capped one of the most uncertain and turbulent summer seasons in the island’s history, and tourism industry players face the fall with some concern.

City leaders in the spring had hoped measures to reduce the spread of coronavirus cases would save the summer for island businesses. But the high tourist season was mediocre at best and worse than that for many.

Island leaders agree the number of visitors — and the amount of money — that made their way onto the island over the summer weren’t as far below normal as they might have been. But many business owners still are facing a fall devoid of the major festivals that help them survive the lean months. Others are worried about the near disappearance of business travel that typically fills hotel rooms and restaurants.

Compared to other cities, Galveston, with the draw of the beach, could have done a lot worse, said Brett Otteman, general manager of Katie’s Seafood House, 2000 Wharf Road.

Galveston’s coastal location and tourism industry drew people eager to get out of the house, Otteman said.

With dining room occupancy limited to 50 percent, the restaurant did as well as it could but not as well as Otteman would have hoped before the pandemic, he said.

“But the off-season’s about to hit and we don’t know what to expect,” Otteman said.

Summer typically is the high season for Galveston’s tourist industry, which accounts for 9,000 island jobs and in a typical year attracts 7.2 million visitors. This year, businesses faced state- and city-mandated closures, mask requirements and restrictions on the beach, one of the island’s biggest draws.

Many business operators usually count on the summer to make the most profits in advance of the slower winter season.

“It has been a very challenging summer season here in Galveston, across the country and around the world,” said Michael Woody, chief tourism officer for the Galveston Island Park Board of Trustees. “The response and recovery to the pandemic within the tourism industry has not been one-size-fits-all.”

The park board promotes island tourism.

While fear of the pandemic kept people in and closures shuttered some businesses temporarily or permanently, many operators have found ways to adapt, Woody said.

And Galveston has been fortunate to get the day-trippers and weekenders from the Houston region, he said.

But many still are worried about the fall after a flurry of cancellations by large festivals, the usual off-season draw for tourists.

Given that many festivals might not be happening, Dale LaFleur, owner of Galveston Bookshop downtown, hopes cruise traffic returns soon.

LaFleur bought the bookshop, 317 23rd St., in February, when cruise passengers and crew members made up a good chunk of the store’s customers, he said.

“I haven’t had a normal month since I’ve owned the business,” LaFleur said.

LaFleur is confident he’ll make it through the winter, but Galveston needs its tourists, he said.

“Anybody that doesn’t think tourism is a huge portion of the economy for small businesses on the island is kidding themselves,” LaFleur said.

A HIT TO THE SUMMER

Galveston isn’t in as bad a situation as it could be, said Gina Spagnola, president and CEO of the Galveston Regional Chamber of Commerce.

“It’s not as horrific as what we have thought,” Spagnola said.

Many owners adapted their business models to meet the new demands, she said.

The park board had predicted the city would collect $12.3 million this year in hotel occupancy tax revenue, the same as last year. The 15-cent tax on every dollar spent on lodging goes to promoting tourism and other arts and historic projects.

But earlier this summer, the park board revised its estimates, predicting it would only collect $8 million, according to park board records.

For many, the Labor Day weekend brought fair business, although there weren’t as many people on the island as during the Memorial Day holiday.

From Sept. 4 to Sept. 6, the Friday through Sunday of Labor Day weekend, about 120,300 cars crossed the Galveston Causeway onto the island. That’s 33,000 fewer cars than the roughly 153,000 that traveled to the island May 22 to May 24 during the Memorial Day weekend. But unlike during the Fourth of July holiday, officials didn’t close beaches.

Clark also is president of the Galveston Restaurant Association.

“There’s not going to be a big draw to the island from the festivals,” Clark said. “When the weather is not favorable, no one really wants to come to the beach.”

For now, restaurants are just doing what they can to plan and reduce expenses, he said.

“We’re all kind of watching every penny to make sure we stay afloat,” Clark said.

The lack of conventions and business travel also is concerning to Dennis Byrd, owner of The Spot, 3204 Seawall Blvd., and DoubleTree by Hilton Galveston Beach, 1702 Seawall Blvd.

May and June brought good business this year, but July was bad, he said. And March and April were really bad, he said.

“All of that is gone,” Byrd said. “No one knows when that’s coming back.”

Now is the time to get creative about marketing the island, Byrd said.

“Whoever’s responsible for the marketing of Galveston Island, now is your time,” Byrd said. “You’re up to the plate. Once that business is coming, all of the business owners will do our part. We’ll buy in.”

People are working on that marketing, Woody said.

“Galveston is a place that offers a sense of calm and escape,” he said. “A place where you can heal your mind, body and soul.”

And Woody is hopeful that this year, Labor Day won’t mark the end of the summer, he said.

“The new normal for a lot of people is working remotely and online learning, which makes travel more feasible,” Woody said.

As to what officials could have done differently?

If the city could have avoided beach closures, that would have helped business, Clark said.

“Maybe if the mandatory mask order was put into place much earlier, then we wouldn’t have had this massive outbreak,” Clark said. “Hindsight is 20/20.”

Maybe elect a pro-business mayor and city council and stop believing everything on tv and Facebook.

If you are looking to Washington, good luck.