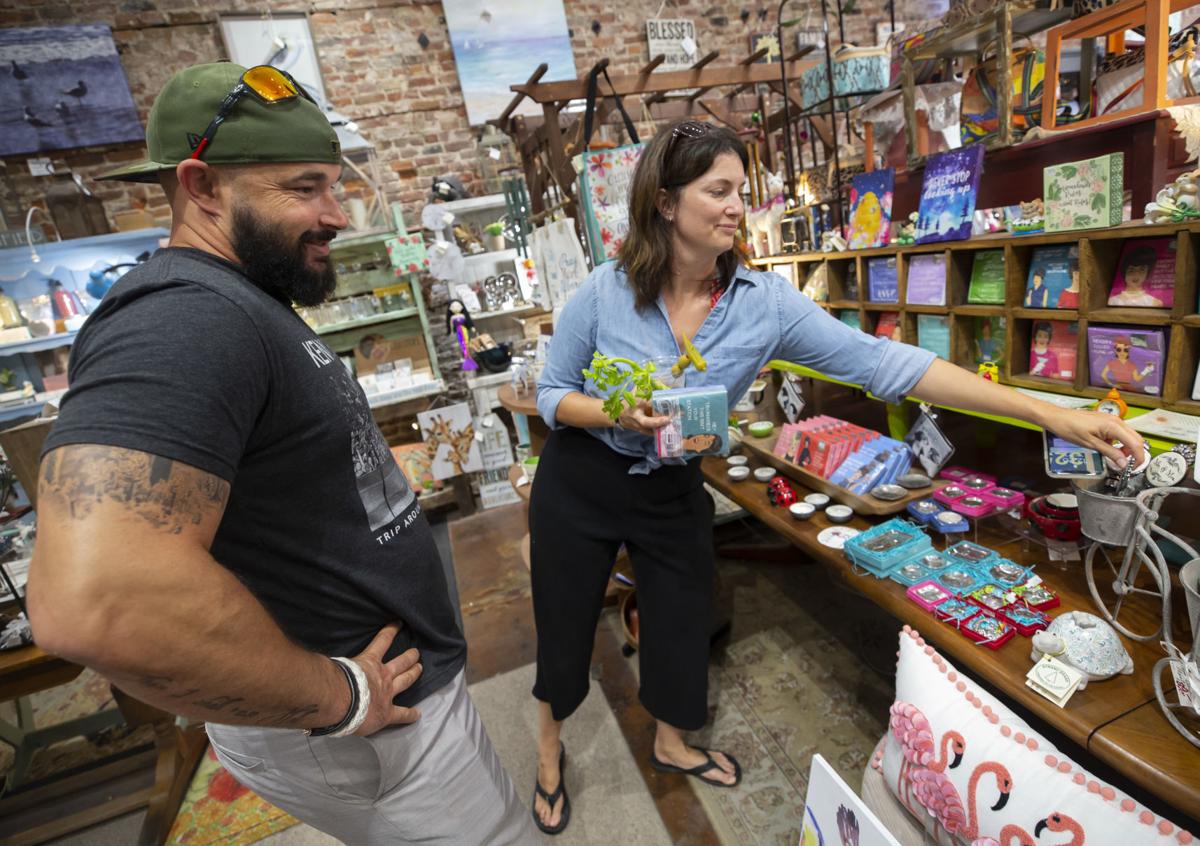 Michael and Amanda McCormick, of League City, shop at Strand Brass and Christmas on The Strand in downtown Galveston on Friday, May 15, 2020. The couple said it was their first shopping outing in a long time. 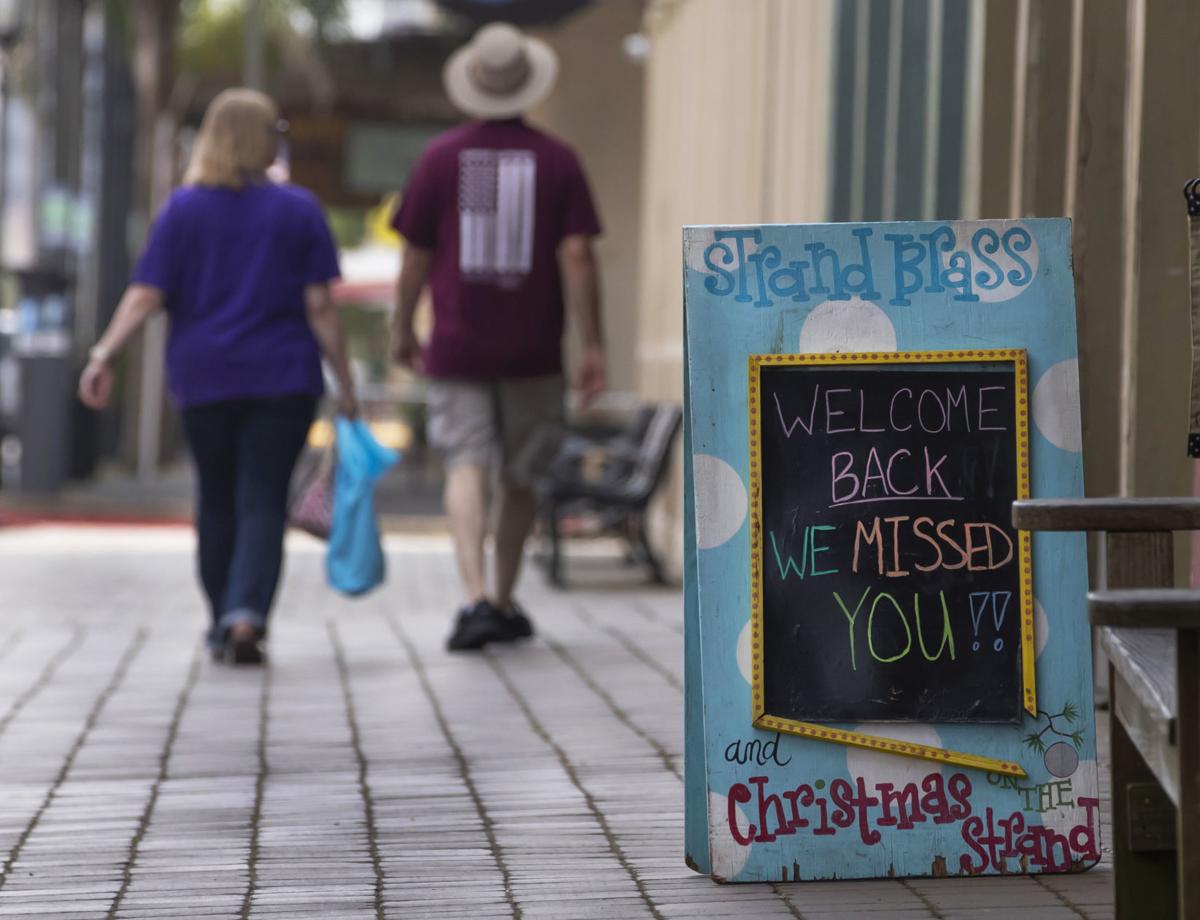 A sign outside of Strand Brass and Christmas on The Strand welcomes guests as shoppers stroll on The Strand in Galveston on Friday, May 15, 2020. 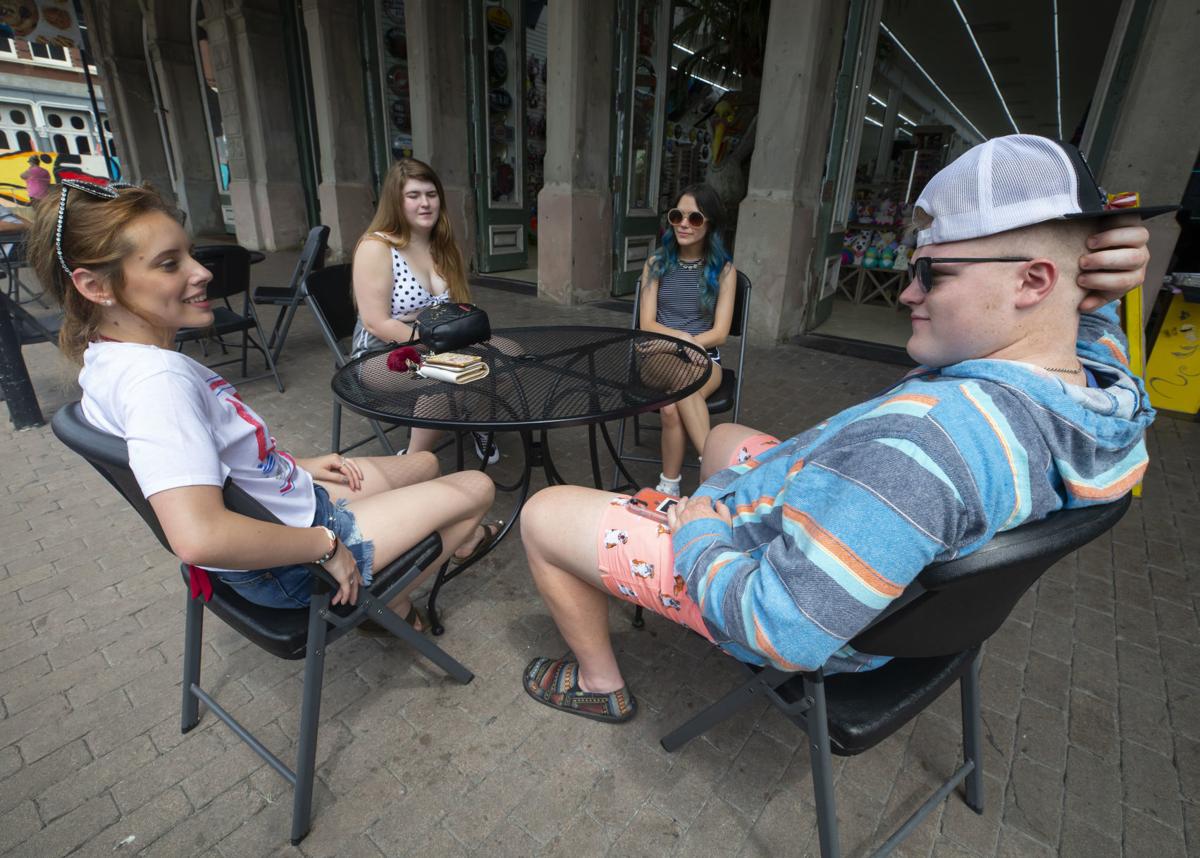 From left, Alyssa Lane, Wynter Price, Tristan Ehlers and Zach Pitts chat while sitting outside of shops on The Strand in Galveston on Friday, May 15, 2020. The high schoolers were visiting Galveston from Huffman. 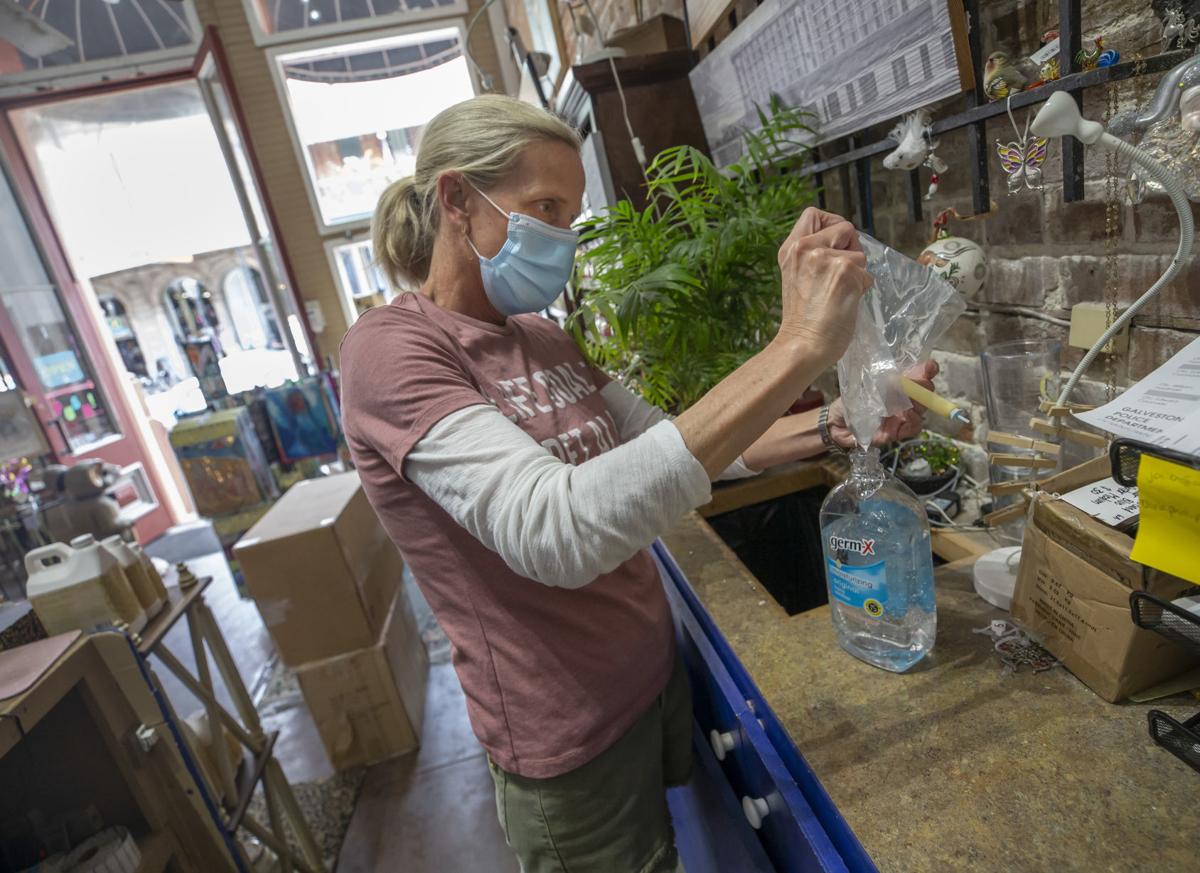 Ginger Herter, co-owner of Strand Brass and Christmas on The Strand, fills a bottle of hand sanitizer for customers to use at the shop in downtown Galveston on Friday, May 15, 2020.

Michael and Amanda McCormick, of League City, shop at Strand Brass and Christmas on The Strand in downtown Galveston on Friday, May 15, 2020. The couple said it was their first shopping outing in a long time.

A sign outside of Strand Brass and Christmas on The Strand welcomes guests as shoppers stroll on The Strand in Galveston on Friday, May 15, 2020.

From left, Alyssa Lane, Wynter Price, Tristan Ehlers and Zach Pitts chat while sitting outside of shops on The Strand in Galveston on Friday, May 15, 2020. The high schoolers were visiting Galveston from Huffman.

Ginger Herter, co-owner of Strand Brass and Christmas on The Strand, fills a bottle of hand sanitizer for customers to use at the shop in downtown Galveston on Friday, May 15, 2020.

People are getting restless.

After nearly two months of being cooped up in houses and the absence of everyday lives and routines, Galveston County residents are venturing out in increasing numbers, eager to make human contact and return to society — at least some semblance of it — as health officials warn too much intermingling too fast could cause a spike in COVID-19 cases.

A social distancing index developed by the Maryland Transportation Institute shows that Galveston County residents, and Texans, are leaving their houses more frequently and traveling farther than they were a month ago, said Lei Zhang, director of the institute.

On April 13, Texas had a social distancing index of 50, and by Tuesday, the most recent data available, that index had dropped to 39, according to the database for which 100 means everyone stays home.

For Galveston County residents, the index was 52 on April 13 and 37 on Tuesday, according to the index.

The index uses data from 100 million cell phones to measure how much people get out, how far from home they go and whether or not they’re going to work, Zhang said.

Easter on April 12 was the peak of social distancing across the nation, but the index started dipping after April 14, when people started going out more often, Zhang said.

Initially, the dip was just in southeastern states, Zhang said.

“People just want to get out of the house and get some fresh air,” Galveston resident Steven Michael Sparks Jr. said.

Sparks has been working at his job at a car dealership, but his wife was furloughed from tourist attraction Galveston Island Historic Pleasure Pier and has been helping their three children with virtual schooling since mid-March, he said.

The family has adjusted its lifestyle by wearing masks when out and by practicing more frequent hand-washing, but it’s time to allow people to return to normal activities and let parents entertain their children out of the house, Sparks said.

“Life goes on,” Sparks said. “Everyone just has to be careful.”

ANXIETY OF THE UNKNOWN

Restlessness and anxiety are understandable, experts say. Being stuck inside can be challenging for people whose normal routines are upended, said Dr. Asim Shah, professor and executive vice chair of psychiatry at Baylor College of Medicine.

The unknown causes anxiety and with COVID-19, the unknown is prolonged and feels indefinite, he said.

“That’s what’s causing some of the stress,” Shah said.

Kemah resident Lori Kindred understands the need to be cautious, but for mental health, it’s time for governments to start easing restrictions, she said.

“I think for mental stability, if anything, getting back to semi-normal is a good thing,” Kindred said.

Kindred doesn’t like large crowds, but she’s still eager to get back to her favorite restaurants and spots, she said. Others, however, have definitely been ready and might have jumped over the phased reopening, she said.

“People were so eager to get out of the house that it was hopping to phase three,” Kindred said.

People want to social contact, said Matthew Gallagher, associate professor in the Department of Psychology at The University of Houston.

“It’s the social relationships, the social contact that is really, really crucial and is often one of the best predictors of doing well mentally,” Gallagher said.

Although some people are limiting their outside venturing to returning to the work of the office, others might be moving too fast in their quest to return to normal, Gallagher said.

“They’re finally free and they really want to go for it and they might not be thinking it through,” Gallagher said.

Many people who want to leave home are doing so safely and are wearing masks, Shah said.

“But there is a second group that always likes to defy,” Shah said.

There will probably be multiple spikes of the virus as people start to go out into society, said Dr. Philip Keiser, the Galveston County Health District’s top health official. The influenza epidemic of 1918 took two years to eradicate, he said.

“People don’t want to hear that and I understand that,” Keiser said.

What saved Texas and the region from becoming harder hit by coronavirus was shutting down large events and closing businesses, he said.

“It could have happened to us,” Keiser said. “I think our leadership made the right decision.”

But it’s time to start reopening, he said. Keiser and his wife have been to several restaurants, but he’s also seen many people not wearing masks in public or practicing proper social distancing, he said.

“The reality is if we all wear masks for a month, that’s really going to help with preventing the spread of this,” Keiser said.

“But there is a second group that always likes to defy,” Shah said.

Typical melodramatic overstating and stereotyping, lumping the irresponsible with those of us who have done extensive research and have come to other conclusions based on science. There isn't one opinion about this, even though an attempt is being made to seem so. The record is clear that there are experts who disagree with the idea masks and social distancing are helpful; some say it can be harmful to the wearer. Here are some reality checks for Shah and others in the same category.

1) The World Health Organization (WHO) currently recommends that people should only wear a face mask or surgical mask if they are taking care of a person with suspected COVID-19 or if they are sick themselves.

2) Dr. Jenny Harries, England's deputy chief medical officer, has warned that it was not a good idea for the public to wear face masks as the virus can get trapped in the material and causes infection when the wearer breathes in. For the public, they should not wear face masks unless they are sick, and if a healthcare worker advised them. "For the average member of the public walking down a street, it is not a good idea," Dr. Harries said.

3) Two infection specialists at the University of Illinois at Chicago who did extensive testing of various face masks say it may only be as effective as 2% reduction and that the way most people wear them (loose for comfort) means their respiration disburses their outbreath to the sides, where people are less likely to be guarded. They also did a study of surgeon who don't use mask (apparently it is more a familiar habit than based on science). They found no statisitical evidence that procedures done by those without masks had any higher incidence of either follow-on infection or mortality...none.

4) Another researcher echos the WHO and UK deputy chief medical officer saying, if you are not sick but use a mask, you are constantly recirculating and breathing in the waste products of your body's respiratory system. For those who are immune compromised, you may be making yourself MORE likely to be affected rather than less. Stands to reason, why would you intake your own body's waste products?

5) The 6 ft distancing rule? Try to find a study that established that as safe; there are none to be found. It was an arbitrary number picked at random, apparently, during the Bush administration during the SARS scare. There is no scientific justification for all those little squares adorning every checkout line now.

Dr. Shah is a professor of psychiatry, not infectious diseases or epidemiology. Perhaps the good doctor should stick closer to home when speaking on this topic as it appears to be an analysis based on a lack of good information and a bias against against those who hold a different, but better evidenced, viewpoint.

I am still looking for what are the parameters used to determine we had reached the much talked "curve flattening." And, are there accepted metrics to alert us that a detrimental change seems to be developing, as well as to confirm that we have a "hold" on the "Pandemic." It would be great to have such metrics discussed and posted. Just my thoughts.