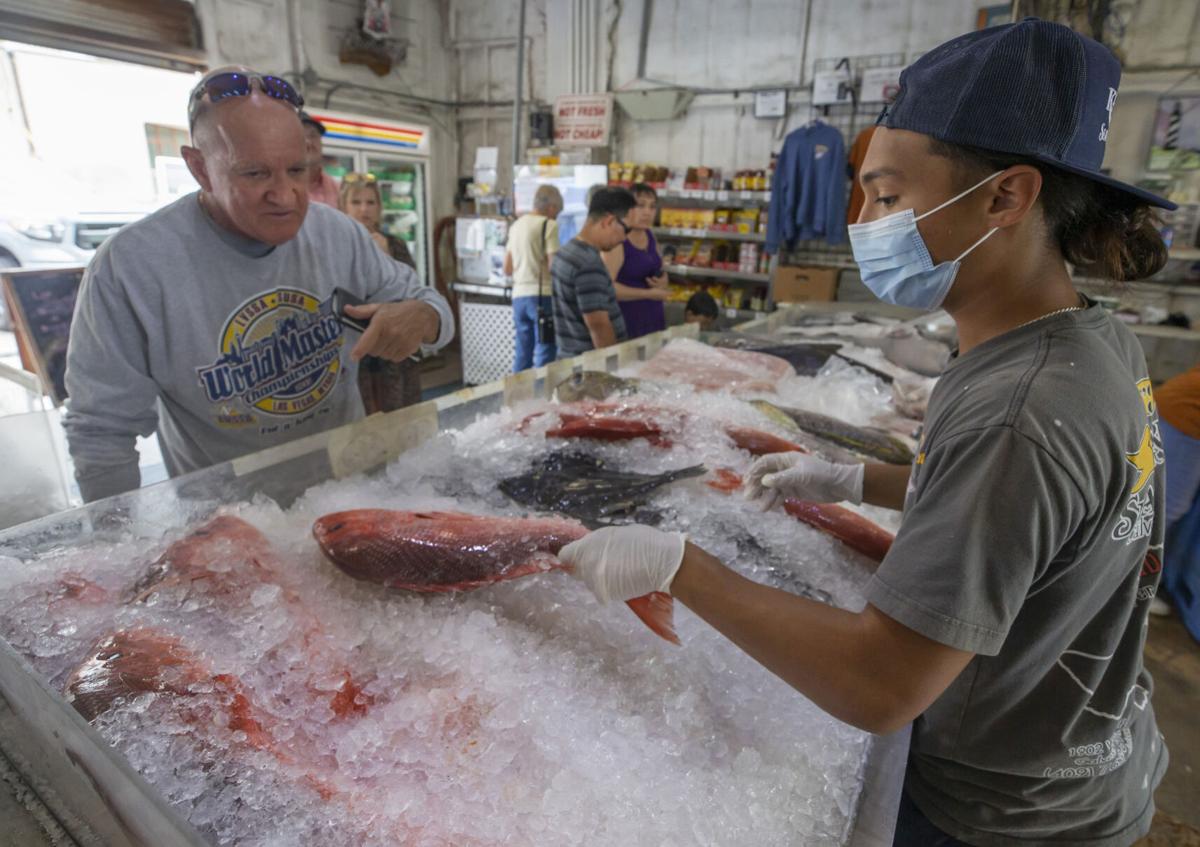 Katie’s Seafood Market employee Nico Harper pulls a snapper from the ice for customer Jim Borup at the fish market in Galveston on Monday, June 1, 2020. 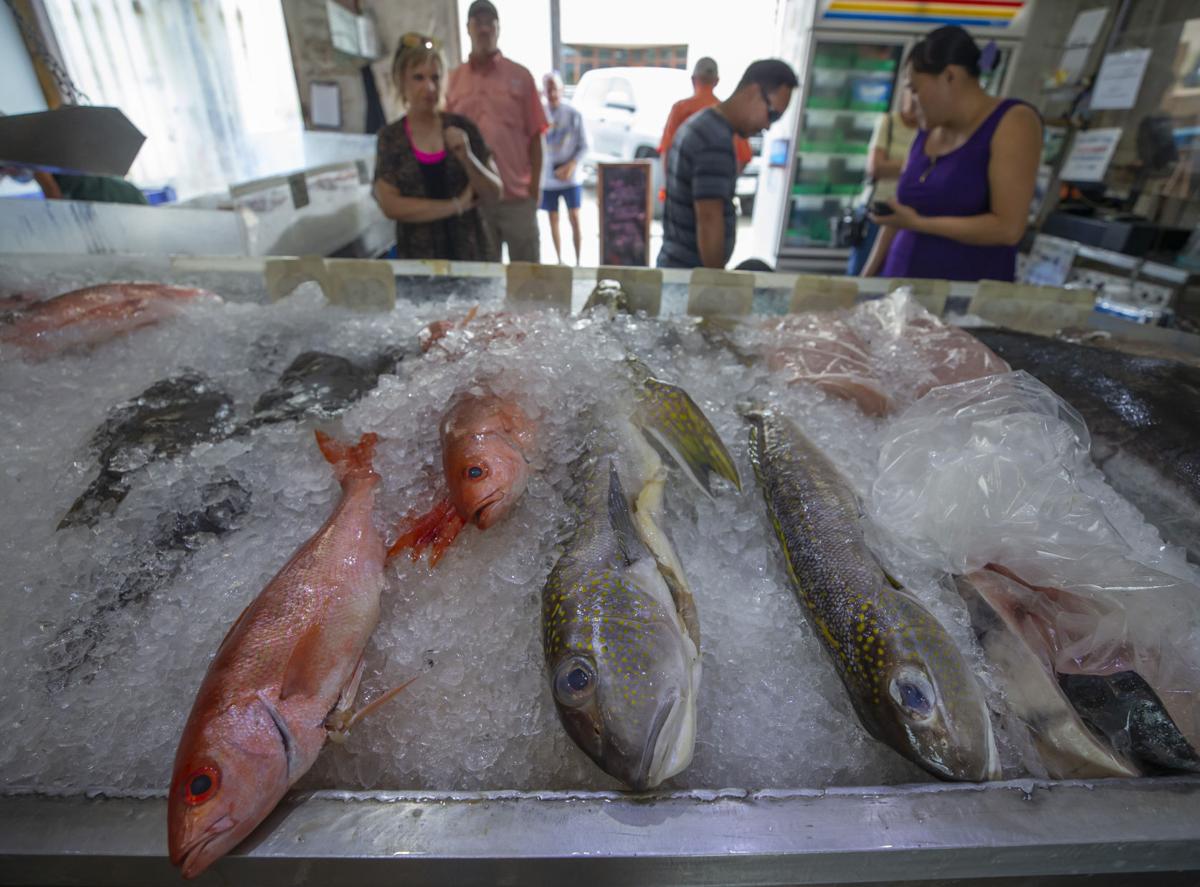 Customers wait in line to buy seafood at Katie’s Seafood Market in Galveston on Monday, June 1, 2020. The market saw record sales during the first weeks of COVID-19 restrictions, owners said. 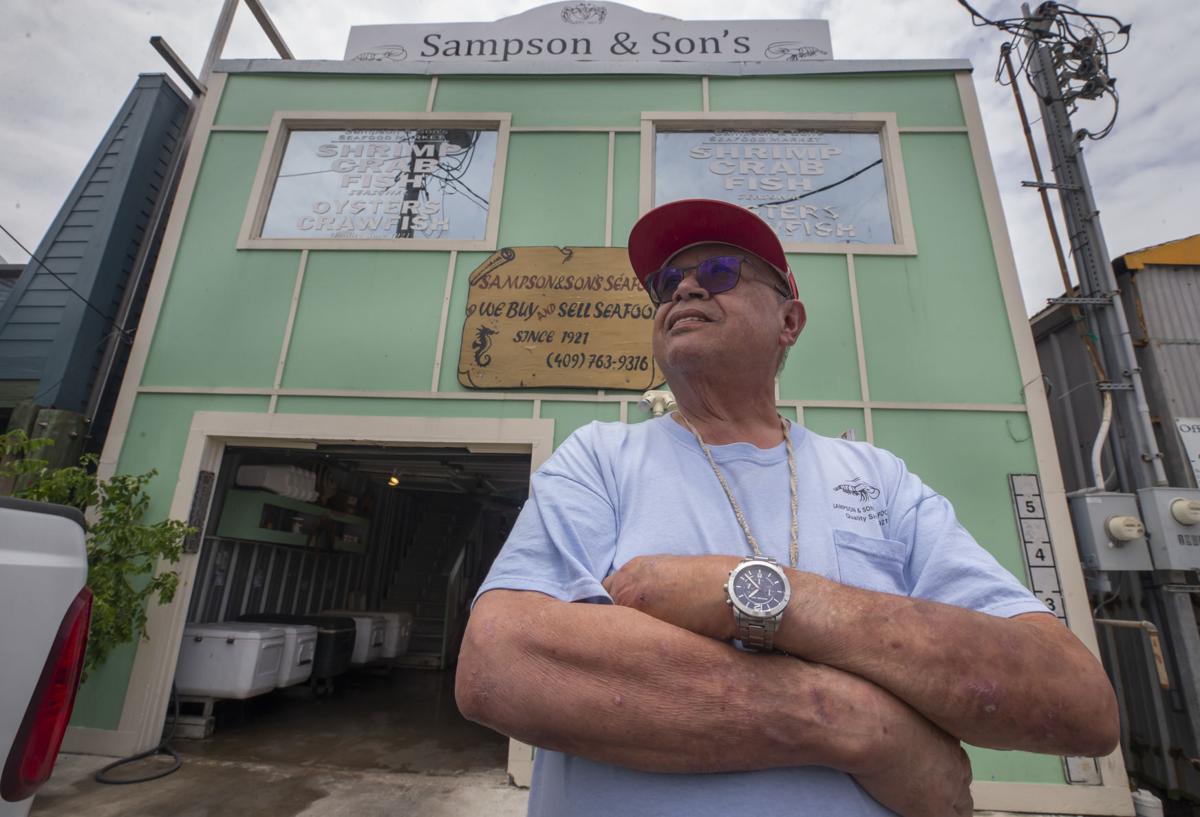 Milton Sampson, owner of Sampson & Son’s fish market, stands outside of his business in Galveston on Monday, June 1, 2020. Sampson, who deals mostly in shrimp, said prices have been stable during the COVID-19 crisis. 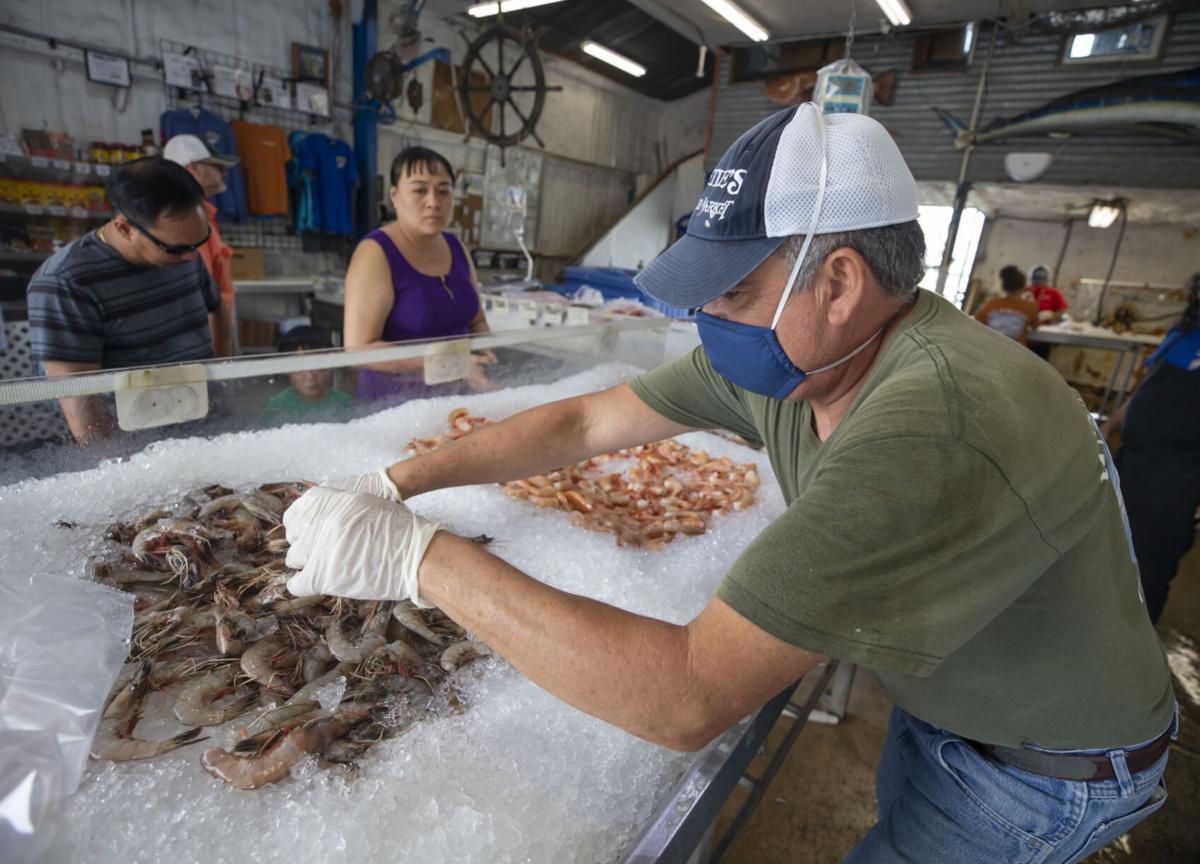 Katie’s Seafood Market employee Nico Harper pulls a snapper from the ice for customer Jim Borup at the fish market in Galveston on Monday, June 1, 2020.

Customers wait in line to buy seafood at Katie’s Seafood Market in Galveston on Monday, June 1, 2020. The market saw record sales during the first weeks of COVID-19 restrictions, owners said.

Milton Sampson, owner of Sampson & Son’s fish market, stands outside of his business in Galveston on Monday, June 1, 2020. Sampson, who deals mostly in shrimp, said prices have been stable during the COVID-19 crisis.

When restaurants shut down in mid-March as a health precaution against COVID-19, commercial fishermen were out in the Gulf of Mexico filling their nets with fresh seafood to fill the plates of Gulf Coast diners.

Then suddenly, large-scale demand for fresh fish came to an abrupt halt.

“We were selling upwards of 50,000 fish per week, then it went down to about 1,000 the week the restaurants closed,” Guindon said.

Guindon sells fish to individuals in his small retail market and sells his catch in the restaurant, but the bulk of his company’s business is in sales of fresh red snapper, grouper and other Gulf fish to restaurants in Texas and beyond, he said.

In Texas, restaurants are right now operating at about 50 percent capacity under Gov. Greg Abbott’s reopening plan, and commercial fishing has climbed back up to about 65 percent of its normal volume in weekly wholesale sales as a result, Guindon said.

The weeks of COVID-19 shutdowns, however, made a distinct mark on the fishing operation’s bottom line that will have to be corrected between now and the end of the year, Guindon said.

Commercial operations such as Guindon’s are permitted to catch a quota of fish during commercial fishing season that runs all year, and the goal is to sell as much of that quota as possible.

Fishermen in this part of the Gulf of Mexico are about 100,000 pounds below their average quota for this time of year, meaning they will have to make it up in the months remaining in 2020, Guindon said.

“It’s more letting the market catch up to what we need to sell,” he said.

Commercial shrimping has been less affected because most of that product is frozen for wholesale distribution to grocery stores, Guindon said.

Milton Sampson, owner of Sampson & Son’s fish market on Pier 20, next to Katie’s, sells fresh Gulf shrimp retail to the public and wholesale to large commercial shrimp processors. His retail business was undermined more by the dearth of visitors on Galveston Island than by supply and demand concerns, he said.

“We normally get people in here from the Dallas and Fort Worth areas and from around Galveston and Galveston County,” Sampson said. “For a while, there just wasn’t anybody in here.”

Luckily for Sampson and the shrimpers who supply his market, the months of the initial COVID-19 crisis were a slow time for shrimping, so supply didn’t exceed demand.

“It really picks up about now, when the weather gets hotter,” Sampson said.

Shrimp prices have remained relatively steady over the past year, and the real effect on the shrimping business comes from competitive suppliers opening up in Central and South America, he said. Those operations can undercut American prices by causing a glut in the market, forcing prices and profits down, he said.

The pleasant surprise for Guindon in the COVID-19 crisis was record sales at Katie’s Seafood Market with the highest volume of retail sales in 27 years, he said.

“Our retail business just went crazy for a while,” he said. With more people cooking at home, more locals were learning to prepare freshly caught Gulf fish, some for the first time and some in lieu of their favorite restaurants being closed down.

“When we were telling people the problems we were having, they were interested in helping us get the word out,” Guindon said.

Guindon expects that, barring any other disasters, the wholesale end of his business will regain its footing.

“It’s always gonna be something; something’s gonna change,” he said. “You can bet on that. It’ll probably take a year or so to get wholesale back to where it was.”

If demand is so low, why haven't prices gone down?