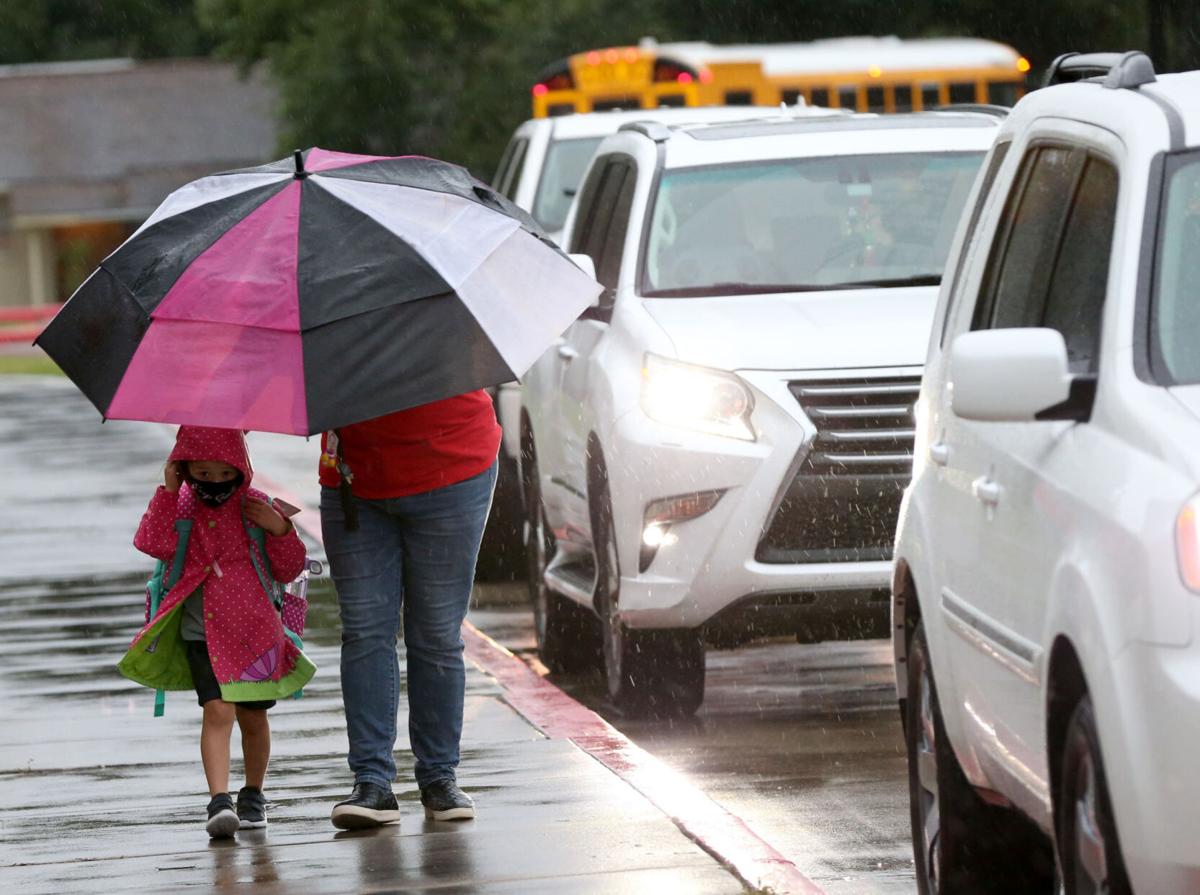 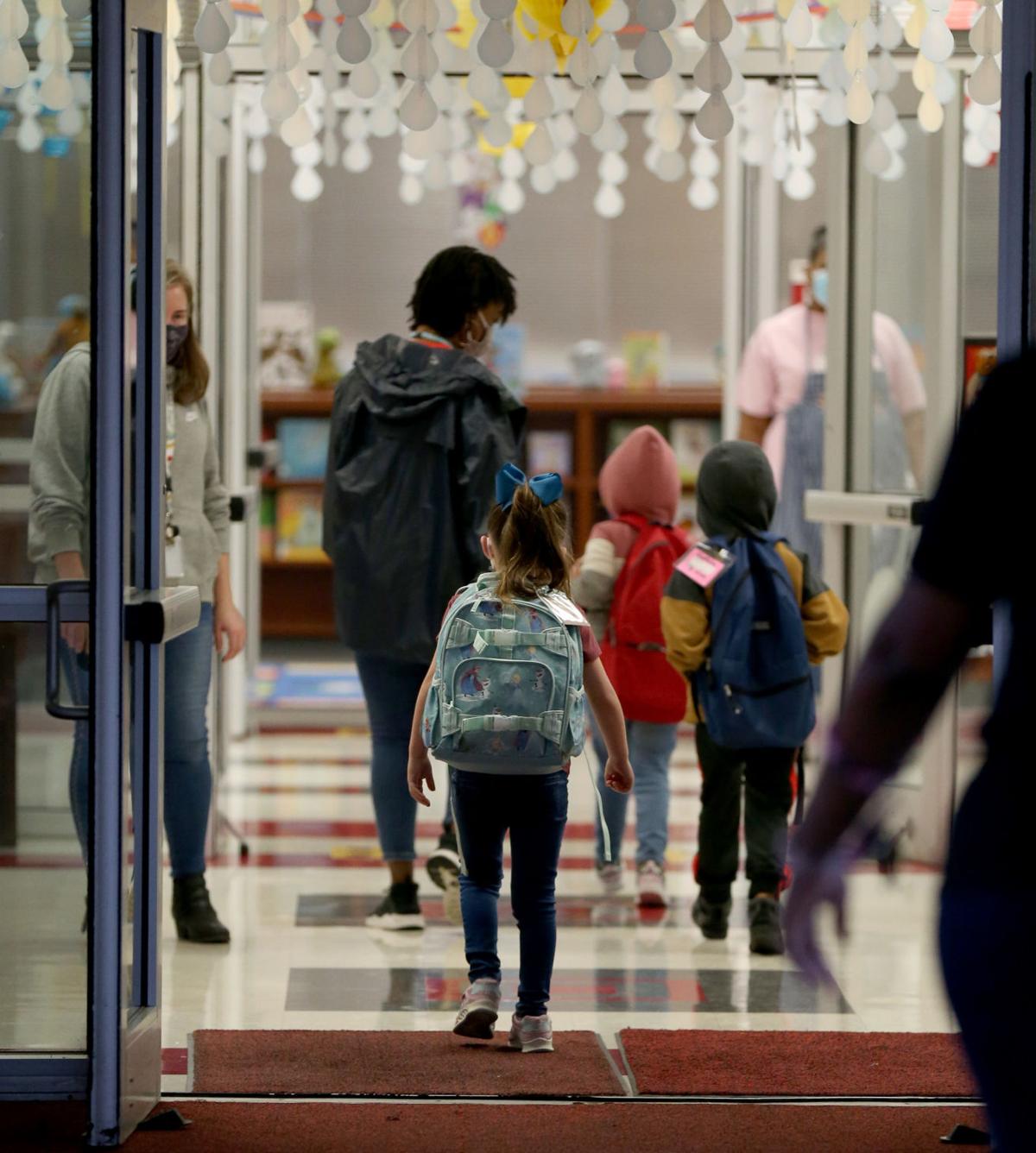 Students head into Hitchcock Primary School for the start of the school day Friday, Oct. 9, 2020.

Students head into Hitchcock Primary School for the start of the school day Friday, Oct. 9, 2020.

Students across Galveston County have largely returned to in-person classes and, with them, some schools have seen teachers and children contract coronavirus.

The schools opened with much uncertainty and some fear about spiking cases of COVID infection, but a little less than a month into the unprecedented event the general assessment is — so far, so good.

Despite the outbreaks, local education leaders haven’t had to close schools. They’ve ordered some students to quarantine and have canceled only a few events.

For instance, two Hitchcock Independent School District high school students tested positive for the virus and district officials quarantined them, along with the rest of the high school band, Superintendent Travis Edwards said.

“While these are the first, they will probably not be the last,” Edwards said. “We are doing everything we can to mitigate these difficult circumstances and provide the best possible education for our students.”

Edwards’ sentiments were echoed both by officials at other county school districts and many parents.

Heather Drew was nervous and worried going into this school year, she said. The mother of a second-grade student at Heights Elementary School in Texas City Independent School District, Drew wasn’t sure what to expect but knew her son needed some normalcy and she needed to return to work.

But the leaders at the elementary school have exceeded Drew’s expectations since her son’s return, she said.

“I think my son’s school is doing a great job,” she said.

Like Hitchcock, Texas City has seen a few cases of coronavirus in its student and teacher population, but district officials are doing what they can to keep people safe, said Melissa Tortorici, spokeswoman for the district.

“We follow our protocol for positive cases and act accordingly,” she said. “It’s been manageable so far.”

The district as of Monday, which is the most recently reported date, was operating at a Level 2 COVID-19 action level, records show. That means that the district has had one or more confirmed cases of the virus at one facility.

Texas City had six students and two staff members test positive the week before that reporting deadline, records show. That’s out of a total student population of about 8,000 and 1,590 employees.

None of the positive cases were at Heights Elementary School, Drew said.

School districts across Texas are required to report COVID-19 data to the Texas Education Agency, which releases rolling updates with that information.

Texas has about 7,620 positive student cases and 5,227 positive staff cases, according to the most recent Texas Education Agency data. An estimated 1.08 million students and 800,000 staff were on district campuses the first week of school.

Most school districts told a story similar to Texas City and Hitchcock.

Galveston has had only a few cases and it hasn’t affected reopening plans, said Billy Rudolph, spokesman for the district.

“We want our students and staff to attend school in the safest environment possible,” Superintendent Kelli Moulton said. “This filtration system is proven effective and will add another level of protection beyond our current coronavirus protocols.”

Clear Creek, the county’s largest school district, had about 27,915 of its 40,300 students on campus during the first week of school, records show. Of those totals, about 32 students had tested positive for coronavirus.

Three coronavirus cases, however, were enough to sideline much of Dickinson High School’s football program for the next two weeks.

The district on Thursday postponed its high school junior varsity and varsity football games scheduled for this week with Clear Falls High School and next week after being notified of positive cases among student-athletes, said Tammy Dowdy, spokeswoman for the district.

The high school will remain open for face-to-face instruction, despite the football team’s quarantine, Dowdy said.

Before that, the district had only seen about five student cases and six staff cases, according to data provided to the Texas Education Agency.

Hitchcock, meanwhile, is still only educating about 75 percent of students in person as part of a phased reopening, Edwards said.

The rest are set to return Wednesday.

“The remote instruction is definitely a challenge, and we have had far too many students struggle with this learning model,” he said.

District officials are encouraging students struggling to return to in-person learning and have made calls to those students, he said.

The Texas Education Agency in July announced that all schools in Texas must offer face-to-face and virtual learning in the fall. Schools only are allowed to close at the order of health officials if an outbreak occurs within a school after it reopens.