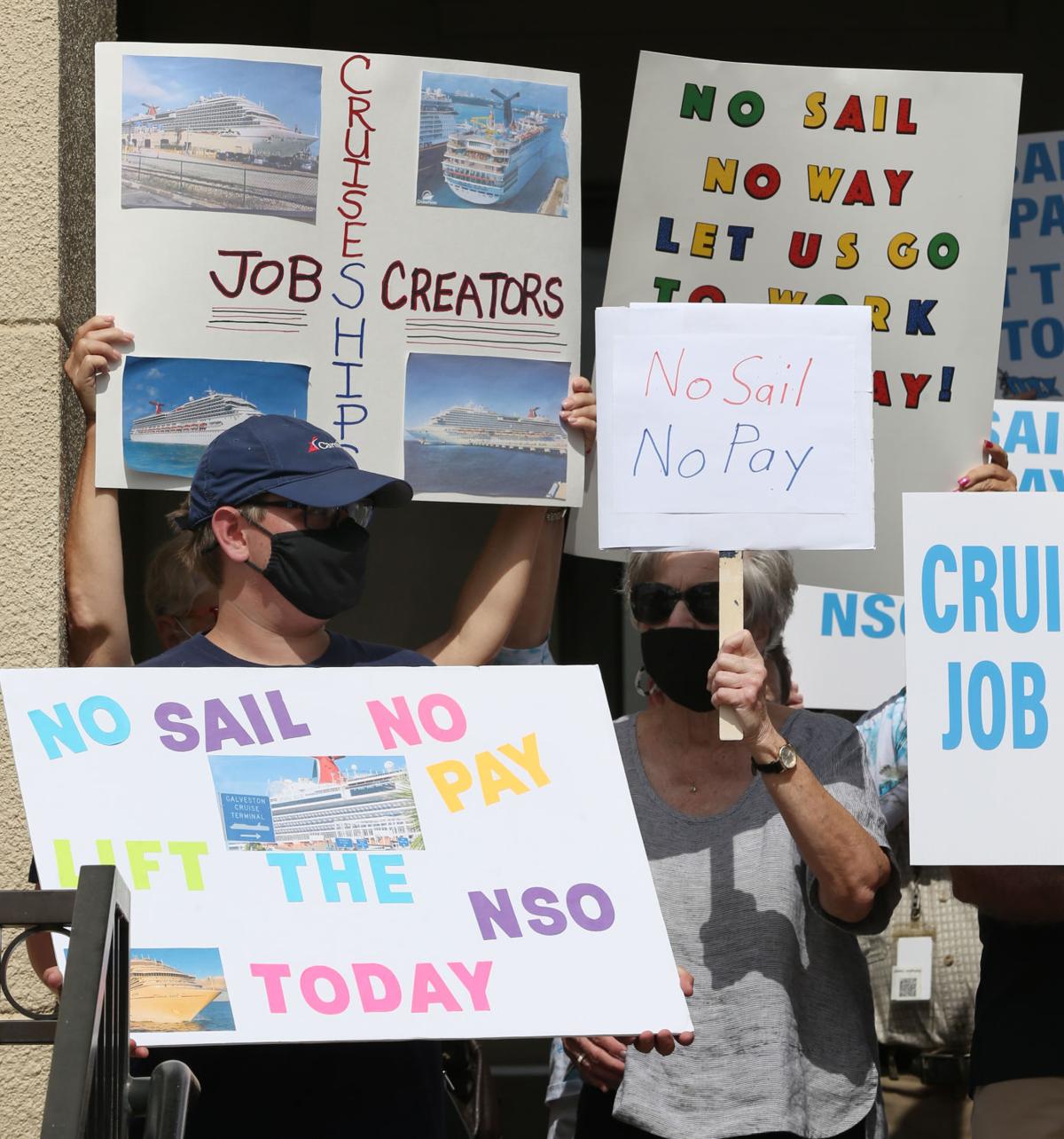 Nicholas Rice, left, who works for Multinational Logistic Services Baleares Consignatarios Cruises at the Port of Galveston, his coworkers and others who work at the port join a rally Wednesday, October 21, 2020, calling for the U.S. Centers for Disease Control and Prevention to lift the no-sail order so they can go back to work. 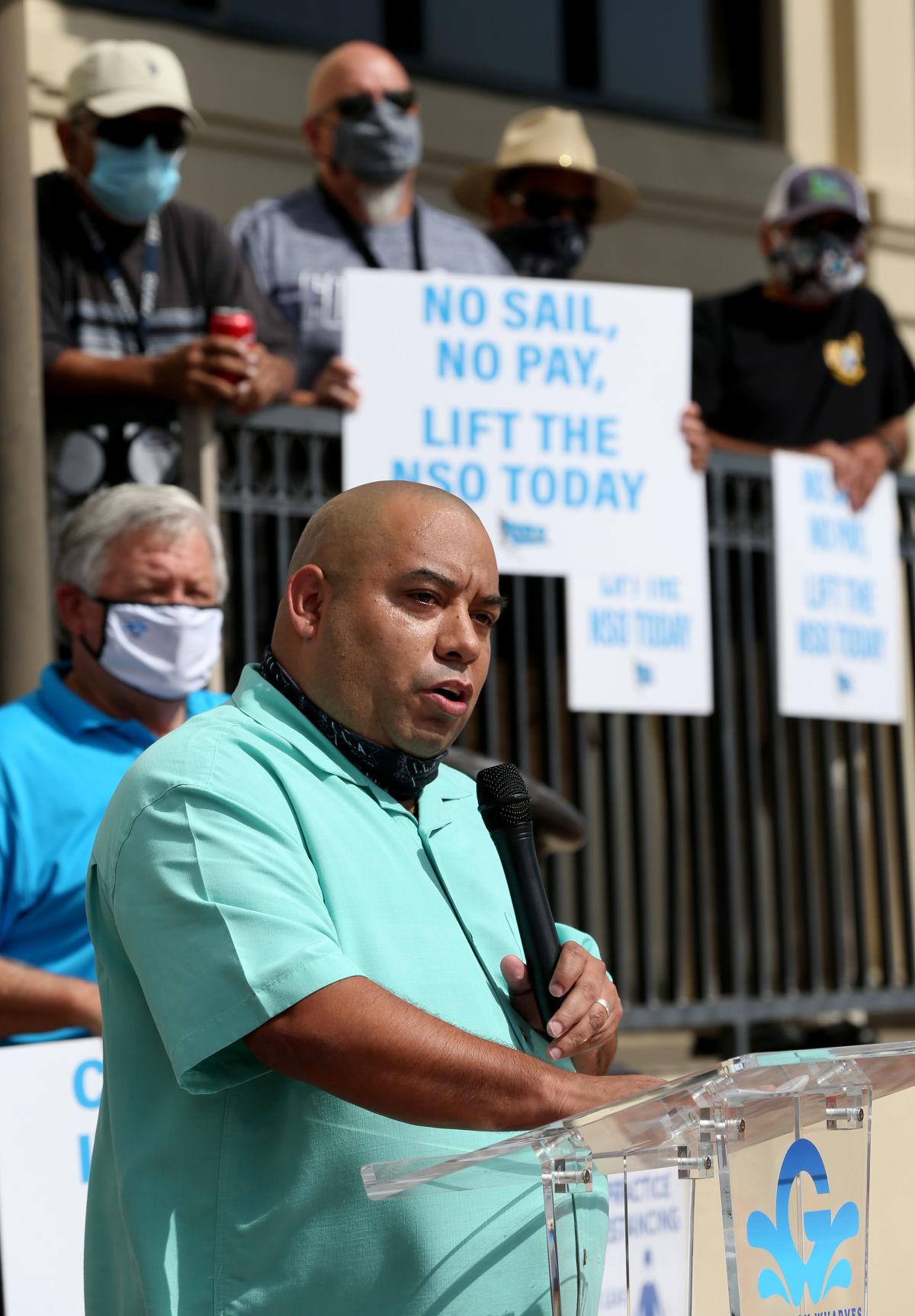 Gilbert Arreazola, with the International Longshoremen’s Association Local No. 20, speaks during a rally at Cruise Terminal No. 1 in Galveston on Wednesday, Oct. 21, 2020. 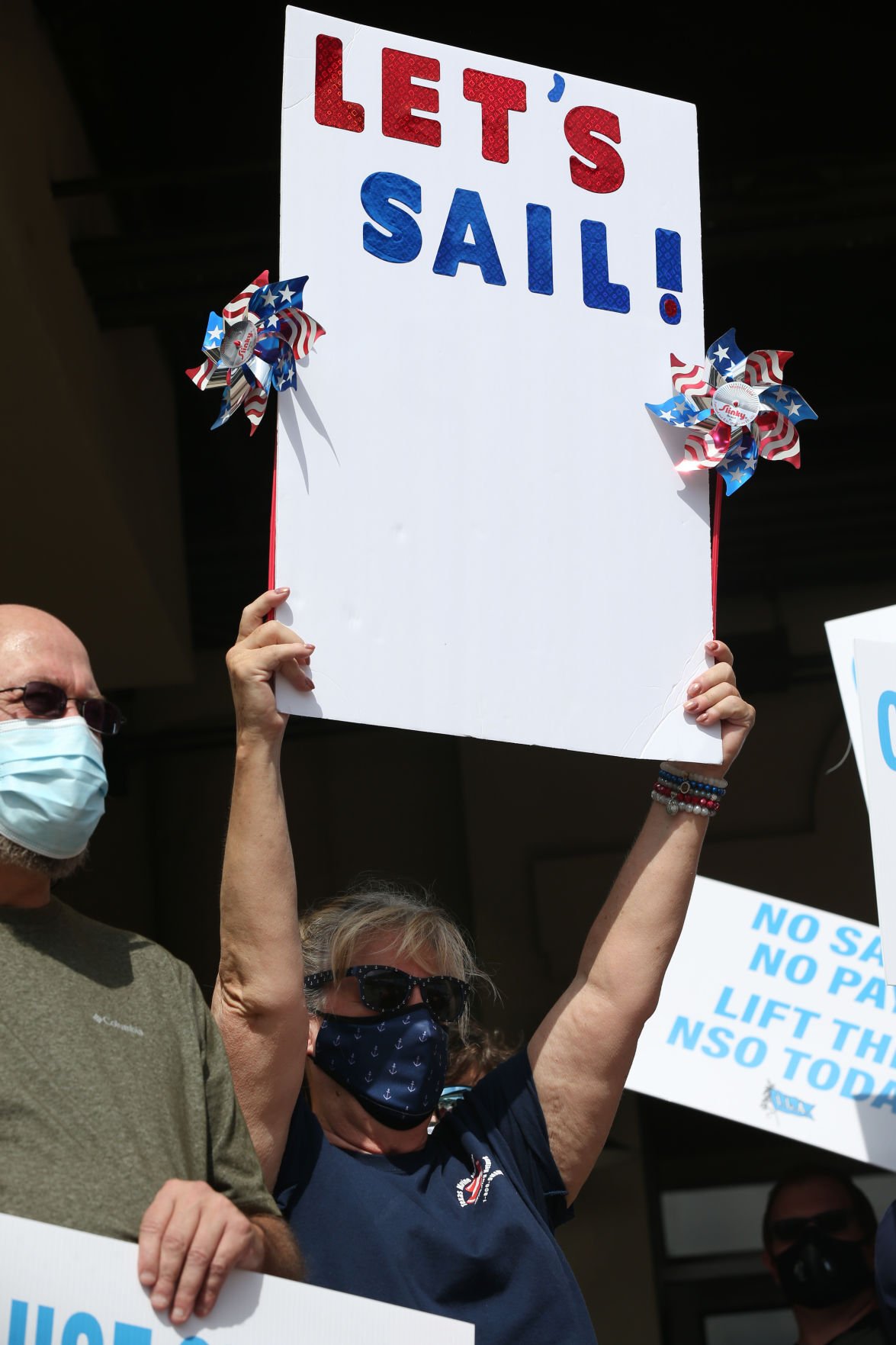 Karen Shields, who works for Multinational Logistical Services Baleares Consignatarios Cruises, joins other port workers in calling for an end to the no-sail order for the cruise industry.

Nicholas Rice, left, who works for Multinational Logistic Services Baleares Consignatarios Cruises at the Port of Galveston, his coworkers and others who work at the port join a rally Wednesday, October 21, 2020, calling for the U.S. Centers for Disease Control and Prevention to lift the no-sail order so they can go back to work.

Gilbert Arreazola, with the International Longshoremen’s Association Local No. 20, speaks during a rally at Cruise Terminal No. 1 in Galveston on Wednesday, Oct. 21, 2020.

Karen Shields, who works for Multinational Logistical Services Baleares Consignatarios Cruises, joins other port workers in calling for an end to the no-sail order for the cruise industry.

Dozens of people who rely on the cruise ships, and cruise passengers, to move in and out of the Port of Galveston rallied together on Wednesday to plead with the U.S. government to remove one of the hurdles preventing cruises from resuming in the United States.

Speakers at the rally at Galveston’s Cruise Terminal No. 1 asked the U.S. Centers for Disease Control and Prevention to let a no-sail order expire as planned at the end of October.

No-sail orders, combined with voluntary shutdowns by the global cruise industry, have paused cruises in the United States since the middle of March. The orders are meant to prevent the spread of COVID-19 on cruise ships, which health officials have pointed to as the source of some of the earliest outbreaks in the United States and as particularly at risk for future outbreaks.

The shutdown has cost cruise companies and the ports they operate out of millions of dollars in revenue. It also has meant that people who work on the docks and at the cruise terminals are losing out on pay.

“No sail means no pay,” one of the speakers at the short rally said.

Gilbert Arreazola, the business manager for Galveston’s International Longshoremen’s Association Local 20, said work for the union’s more than 400 members had decreased by about 50 percent during the cruise shutdown.

Union workers work the docks when a cruise ship comes to the port. They load and unload cargo and luggage, among other tasks.

With no cruise ships, the union is left to rely on cargo ships. Cargo has continued to operate steadily during the pandemic, though the work is often more strenuous and doesn’t carry the incentive of tips from passengers that cruise work carries, officials said.

“When we lose a piece of work, the guys with the higher seniority go to work they normally wouldn’t go on,” Arreazola said. “It’s more intensive work.”

The ILA is “all-in about safety,” Arreazola said, and plans for its members to take COVID-19 precautions seriously once cruising restarts.

It’s not just union workers that are hoping for a quicker return. Some of the people at Tuesday’s rally were contract employees who work at the terminal part-time as ticket takers and terminal attendants.

“I’m a greeter,” said Galveston resident Sara Mayeaux, 67. “When people are coming in, I greet them. I love my job, and I really want to get back to work.”

Mayeaux has worked the terminals for three years, and like many of the terminal workers is a retiree that uses the job as extra income. The loss of work has hurt some but so has the loss of social interaction with cruisers.

“We miss being around the people,” Mayeaux said. “It gives us a reason to wake up in the morning.

While rally-goers said that cruising can be done safely in the pandemic, the Port of Galveston doesn’t have a finalized plan from the cruise companies about what precautions would be taken at the port once cruises resume, Port of Galveston Director Rodger Rees said.

Rees pointed to a plan published last month by the Cruise Line International Association as the thing that likely will be the guiding document for what precautions are taken at Galveston’s two terminals once they open back up.

The port already has taken some steps to prepare the terminals for cruise passengers, including installing new air filtration systems and touchless bathroom fixtures.

But other details, like deciding when and how passengers will be tested for COVID-19 and where they could be quarantined, if needed, are up to the CDC and the cruise lines that lease the terminals.

Even if the CDC lets its no-sail order lapse on Oct. 31, it will be more than a month before cruises restart in Galveston.

Let's hope these men and women can get back to work soon.

The cruise business positively impacts a community’s finances and jobs. It is why Miami commissioners approved waiving up to $285 million to keep cruise market share when cruising is allowed to SAFELY return.

Cruises aren't coming back to Galveston FIRST with those kind of Florida incentives. Our port needs to provide realistic projections in its budget and level with everyone in our community. It needs to stop planning an increase in direct public port jobs while the work has been drastically reduced and the private cruise sector is laying off jobs,

While I agree with the cruise workers protests and desires to get back to work SAFELY, actual Port of Galveston employees (I saw several in the video) that work directly for the public port entity shouldn’t and hopefully aren’t on the public payroll participating and taking part in political positions.

If this pandemic doesn’t clearly demonstrate why diversity in jobs is important.... nothing will.

I hope you are all back to work soon, but believe we are in for a long haul, and the port needs to be having serious discussions on the importance of cruising and cargo jobs to Galveston. It needs to protect its competitive position and use reserves to create new opportunities not squander the reserves on increasing the number of public sector jobs while the actual workload has been drastically reduced,

This article shows that America is still under partial lockdown.

For these people the Covid cure has been worse than the disease. After cruises restart they can hope to start recovering. A process that may take longer than the shutdown.