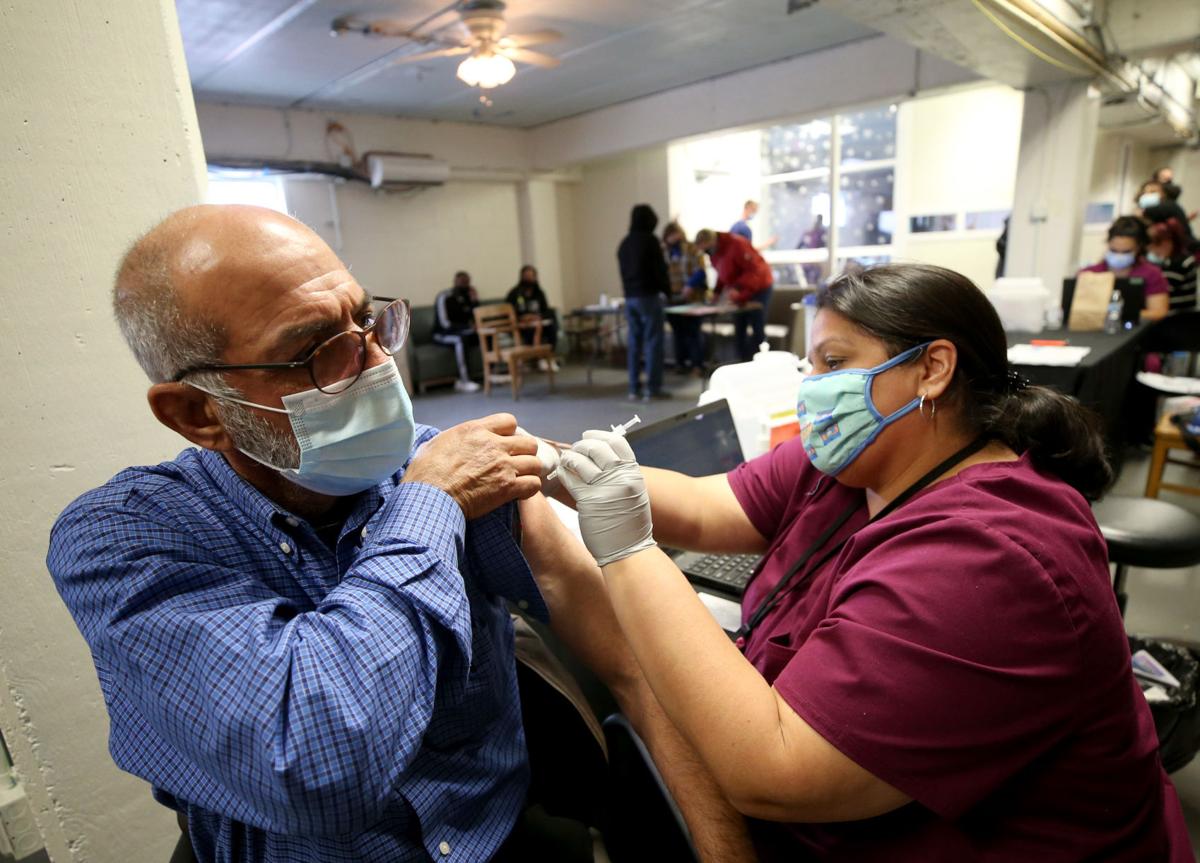 Kimberly Morales, right, with the University of Texas Medical Branch, gives Moradi Parviz his first dose of the COVID-19 vaccine Thursday, Feb. 11, 2021, during a clinic at St. Vincent’s House, 2817 Postoffice St. in Galveston. 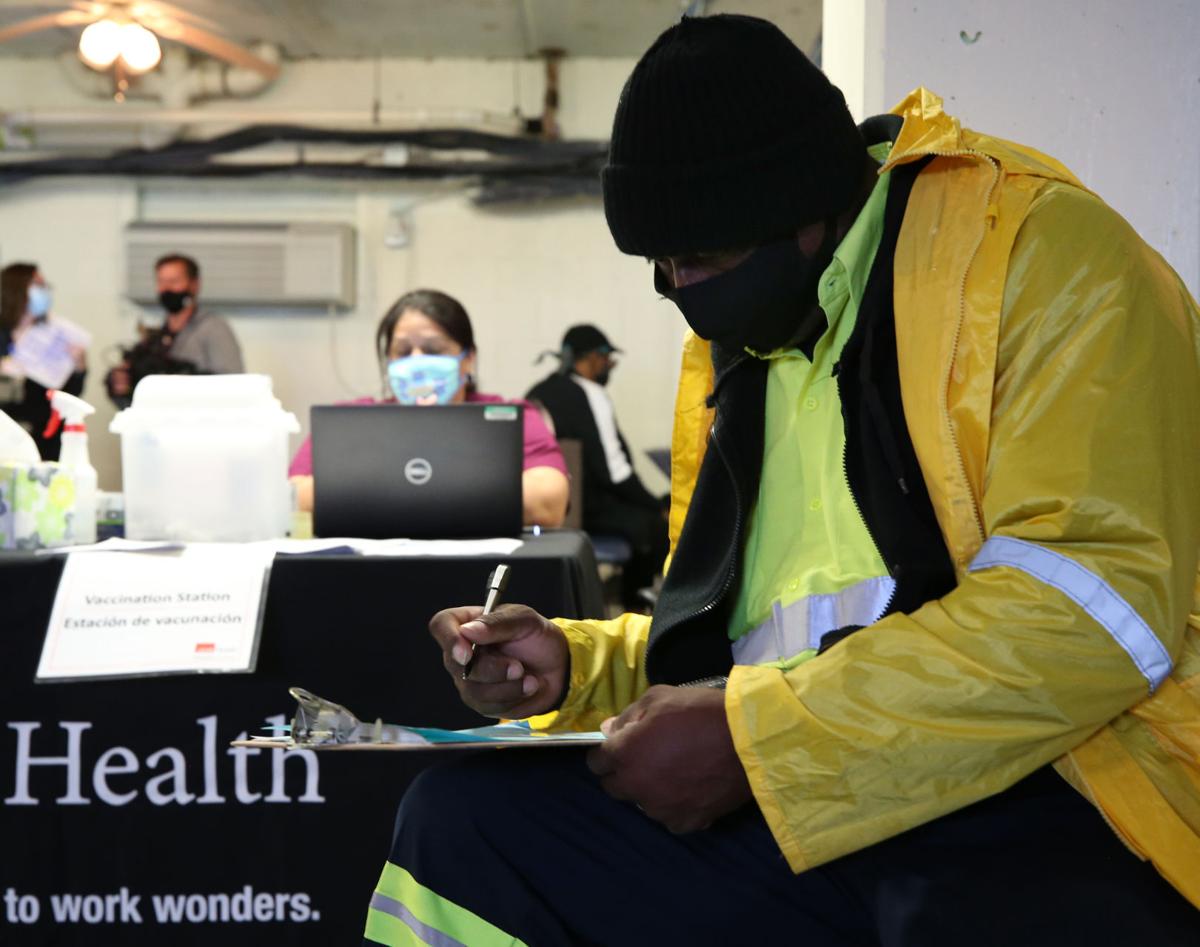 Kim Singleton fills out paperwork before getting his first dose of the COVID-19 vaccine during a clinic at St. Vincent’s House, 2817 Postoffice St., in Galveston on Thursday, Feb. 11, 2021. 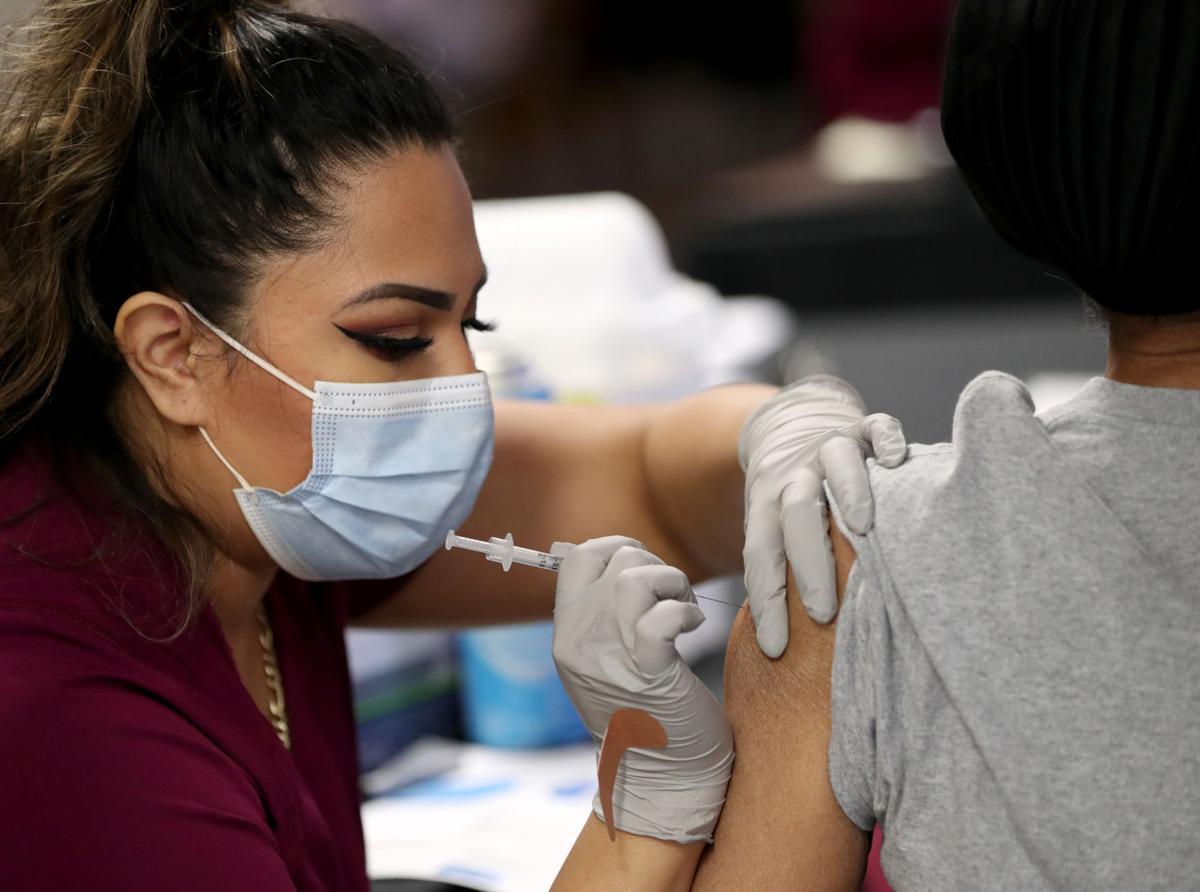 Kimberly Morales, right, with the University of Texas Medical Branch, gives Moradi Parviz his first dose of the COVID-19 vaccine Thursday, Feb. 11, 2021, during a clinic at St. Vincent’s House, 2817 Postoffice St. in Galveston.

Kim Singleton fills out paperwork before getting his first dose of the COVID-19 vaccine during a clinic at St. Vincent’s House, 2817 Postoffice St., in Galveston on Thursday, Feb. 11, 2021.

For most people, getting the COVID vaccine is a matter of waiting their turn in line.

But local officials are making more direct efforts to find and inoculate people who are at higher risk of severe illness if they contract the virus but are wary of getting the vaccine or have little access to technology to get on a waiting list.

In Galveston, that outreach began Thursday in a concrete-floored clinic at St. Vincent’s House, a low-income health clinic, where nearly 100 people were vaccinated as part of a joint effort by the social services agency and the University of Texas Medical Branch.

The event was the first public vaccination clinic to open on the island and was part of a burgeoning effort to vaccinate groups of people in the county who have been underserved in the first nine weeks of vaccinations.

“All these folks here may not have transportation or other resources to go to other locations,” said Craig Kovacevich, the medical branch’s associate vice president of population health. “So, we’re trying to bring the vaccines into the community closer to the people that we’re trying to serve.”

Right now, there’s no problem finding demand for vaccinations. The waiting list for vaccines maintained by University of Texas Medical Branch has more than 80,000 people on it, officials said.

But the easiest way to get on the waiting list is online, and 48 percent of the clients who use the St. Vincent’s House services don’t have regular online access, Executive Director Paula Tobon-Stevens said.

To reach them, St. Vincent’s House began contacting its clients directly Tuesday and letting them know vaccines would be available.

Local health experts said they expect achieving a 50 percent vaccination rate will happen fairly easily. But the goal is to get 70 percent or more of the population vaccinated, which is why efforts like Thursday’s clinics are important, experts said

“The low-hanging fruit is still there,” Dr. Janak Patel, director of infection control and health care epidemiology at the medical branch, said during an interview Tuesday.

“Once we cross 50 percent, the research shows that we have to work a little harder,” he said.

About 5.5 percent of people age 16 or older in Galveston County had been fully vaccinated as of Thursday.

She noted some of the people served by St. Vincent’s House could be driven to League City or Houston to be vaccinated, if needed, but considered travel off Galveston Island a big obstacle.

“For some reason, going across that bridge is a huge barrier,” Tobon-Stevens said, in reference to the Galveston Causeway. “They do not want to leave Galveston.”

Some of the people vaccinated Thursday acknowledged they had some trepidation about the shots. Two Black men said they, or people they knew, were somewhat distrustful of the government’s role in creating the vaccine. They mentioned the Tuskegee Study, a government-run experiment in which hundreds of Black men were told they were being treated for syphilis, when, in fact, they were not.

Leon Phillips, the president of the Galveston County Coalition for Justice, was among those vaccinated Thursday at St. Vincent’s House. Philips said he hoped being among the people vaccinated earliest would help convince others the shots are safe.

“I think it would be a good idea to see more people who are influential in the community coming to take the vaccine,” Phillips, who is Black, said.

Steven Thompson, of Texas City, said he was skeptical of the vaccine but got the shot at his wife’s insistence. They both were vaccinated at St. Vincent’s House.

“I just had questions in my mind,” Thompson said. “But if she was going to do it, I was going to have do it. I wasn’t going to let her do it by herself.”

Along with managing the complex work of delivering vaccines to more than 300,000 people, give or take, in the county, health officials also are working to identify and address worries and myths that might keep people from being inoculated against the virus.

Most of the people vaccinating thousands at League City's hub are volunteering their time and skills. They're not paid money, but some are sent to the front of the vaccination line.

Well done, and thank you all.