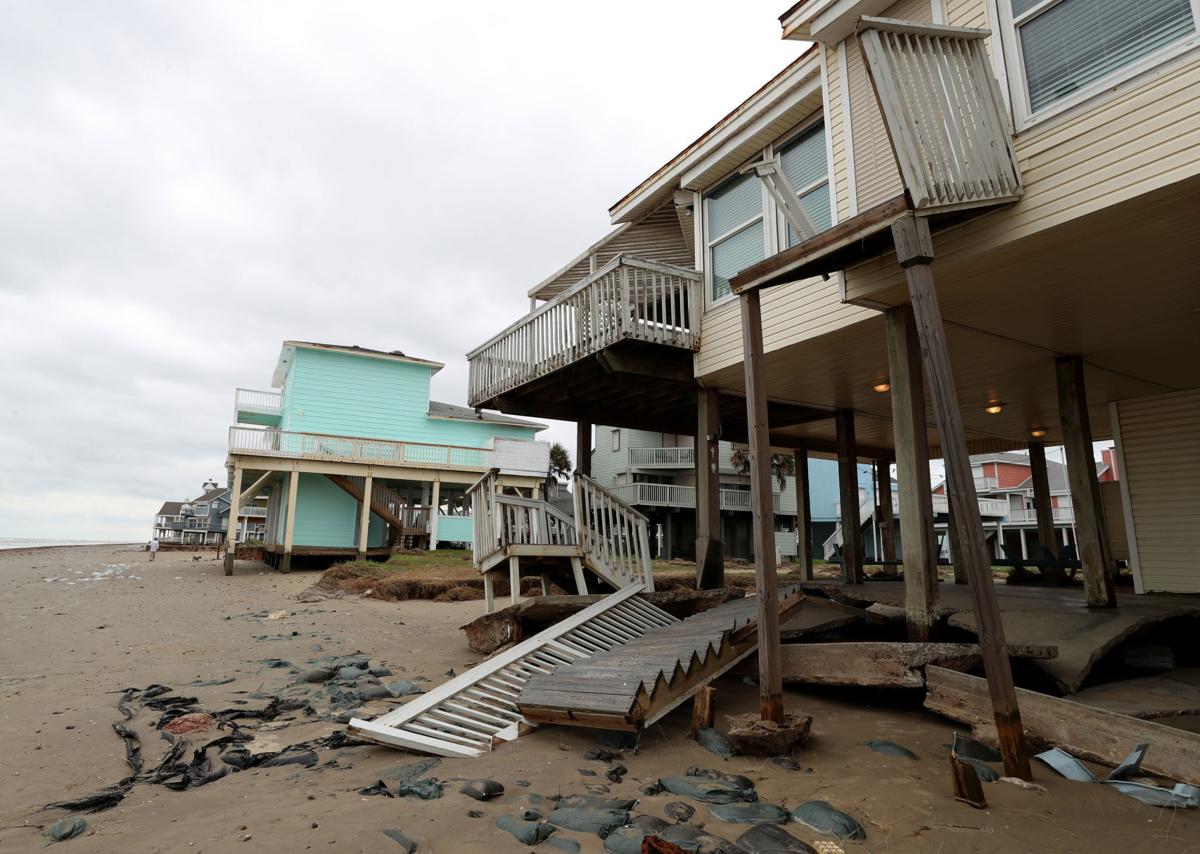 Storm surge damaged dunes and beachfront houses in Pirates Beach on the West End of Galveston on Wednesday, Sept. 23, 2020. 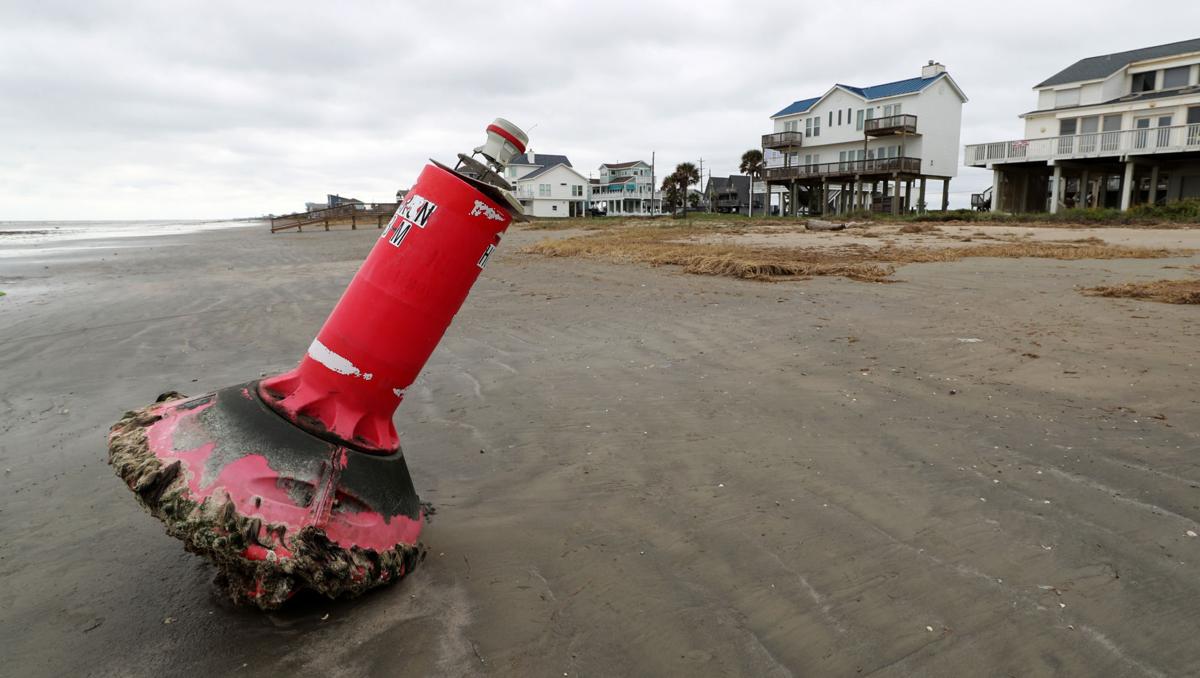 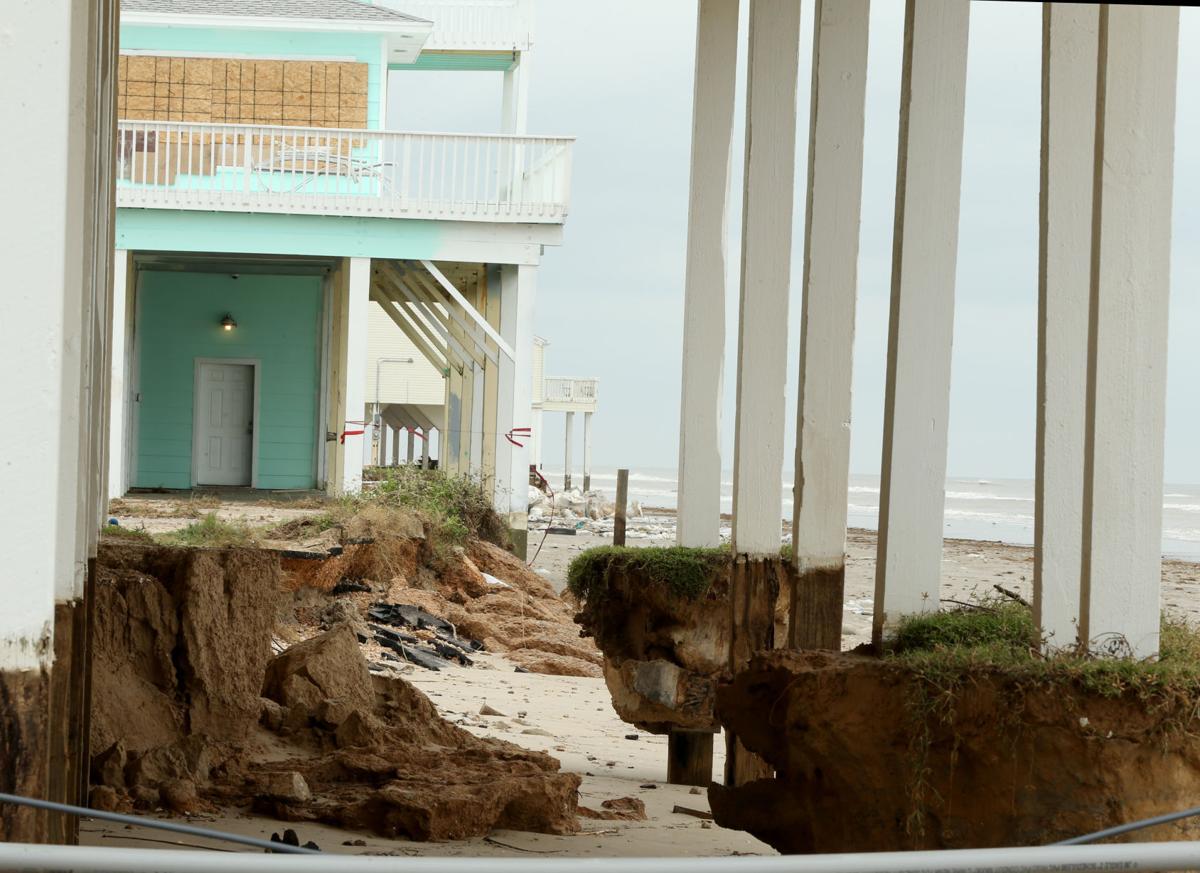 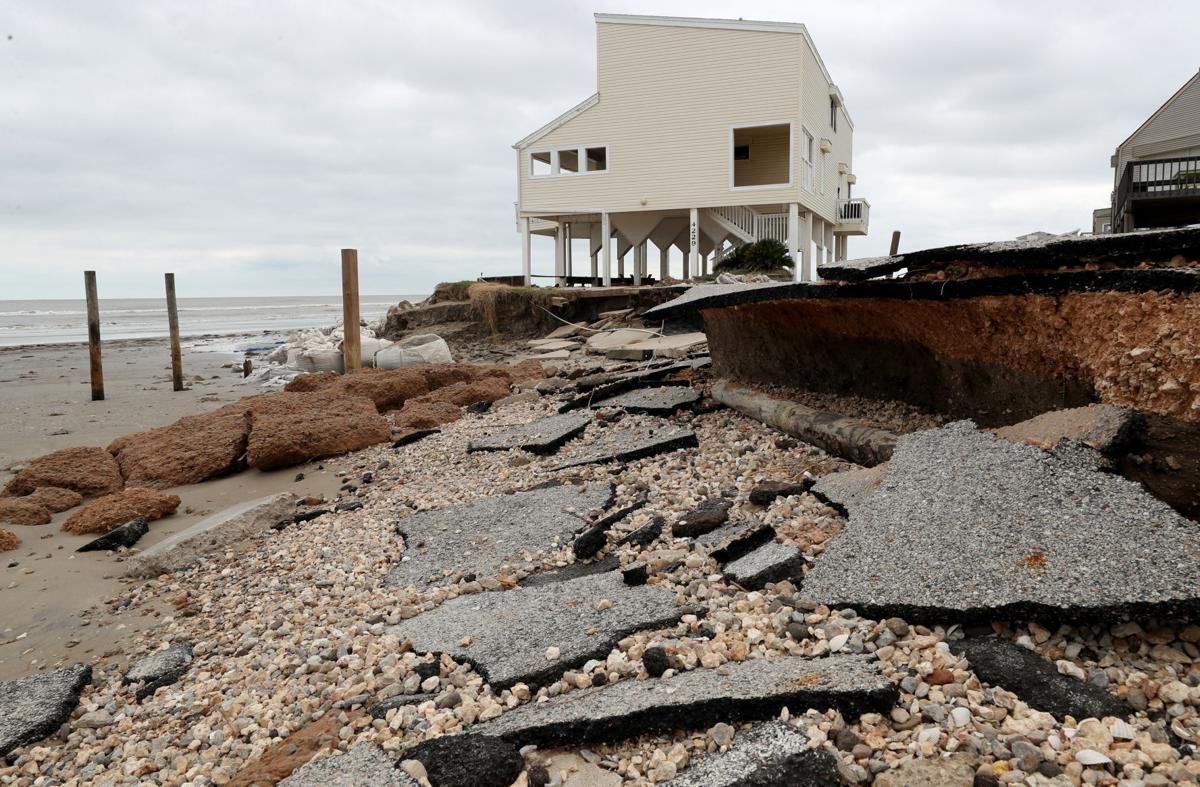 Pieces of asphalt from Sand Crab Lane in Pirates Beach in Galveston are broken off and the road bed underneath is eroded Wednesday, Sept. 23, 2020. 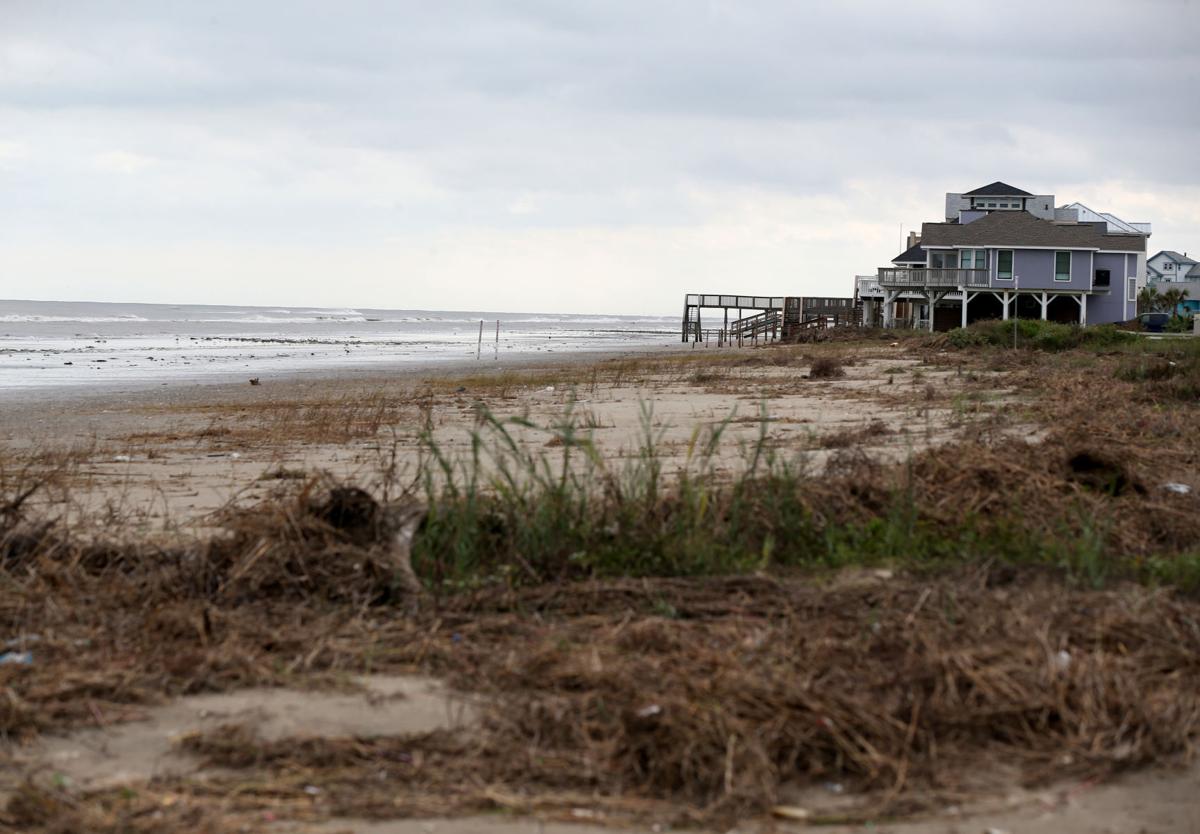 Dunes near 16 Mile Road on the West End of Galveston are eroded away Wednesday, Sept. 23, 2020, after storm surge from Tropical Storm Beta and Hurricane Laura last month. 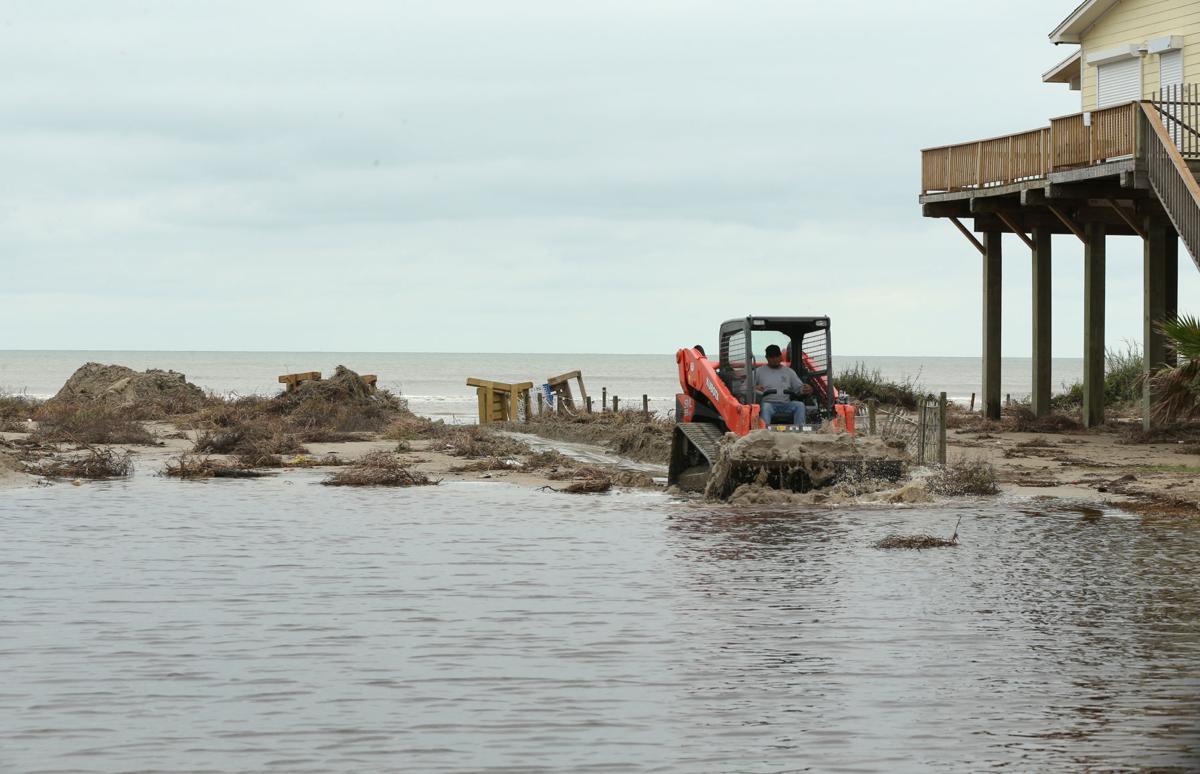 A worker clears sand and debris from Tropical Storm Beta covering the beach access at Buccaneer Drive in Jamaica Beach on the West End of Galveston on Wednesday, Sept. 23, 2020.

Storm surge damaged dunes and beachfront houses in Pirates Beach on the West End of Galveston on Wednesday, Sept. 23, 2020.

Pieces of asphalt from Sand Crab Lane in Pirates Beach in Galveston are broken off and the road bed underneath is eroded Wednesday, Sept. 23, 2020.

Dunes near 16 Mile Road on the West End of Galveston are eroded away Wednesday, Sept. 23, 2020, after storm surge from Tropical Storm Beta and Hurricane Laura last month.

A worker clears sand and debris from Tropical Storm Beta covering the beach access at Buccaneer Drive in Jamaica Beach on the West End of Galveston on Wednesday, Sept. 23, 2020.

Residents walking the West End beach Wednesday morning peered under the washed-out foundations of waterfront homes and climbed down the several-foot drop between the end of San Domingo Drive and the beach.

Part-time resident Sandra Vogt walked on the narrow shore in front of Pirates Beach and pointed to a black plastic tube that was covered by sand two days ago.

“We’ve been coming down here 40 years and have seen this happen over and over,” Vogt said.

Tropical Storm Beta and Hurricane Laura both caused significant damage to West End dunes and undercut some beachfront homes within a month of each other.

The storms left residents and the city not only to clean up the damage but also to untangle a mess of regulations governing dune repairs, which still raises several questions, including how much public money to spend to benefit private property owners.

The damage also kicked up an age-old West End worry about what happens when private houses end up on public beaches after a storm causes the lines of mean high tide and vegetation to shift.

Under the Texas Open Beaches Act, the public has the free and unrestricted right to access Texas beaches, which are on what is commonly referred to as the “wet beach,” from the water to the line of mean high tide. The dry sandy area that extends from the “wet beach” to the natural line of vegetation is usually privately owned but might be subject to the public beach easement.

The city is not yet sure exactly how much damage Tropical Storm Beta caused, Assistant Director of Development Services Catherine Gorman said.

‘WHAT WAS I THINKING’

The city will know more about whether roads were washed out or any dune walkovers damaged after it finishes surveying the West End, Gorman said.

“All of a sudden, I’m asking myself what was I thinking moving here?” Muniz said.

Muniz placed sandbags in front of her beachfront street to try and save it from getting washed out during the storm, she said.

In front of her subdivision, Muniz could see pilings poking out of the sand that once were covered, she said. That’s where a house had been before it got demolished after Hurricane Ike in 2008, she said.

The pilings are dangerous and she wants help fixing it, she said.

“Everybody’s got excuses as to why they don’t do anything,” Muniz said. “I’m confused about the bureaucracy of it all.”

The city plans to expedite the permits residents will need to complete the dune restoration, Gorman said.

But rebuilding dunes often is up to the property owner if those dunes are on their private property.

The state hasn’t imposed a deadline by which residents must repair dunes, but the land office recommends doing so quickly, spokeswoman Karina Erickson said.

The land office also has told the city it can scrape up sand that blew from the beach onto streets and put it back, Mayor pro tem Craig Brown said. Brown is acting as mayor.

But there still are many questions, such as how the city could expend public resources to put sand back on private property, Brown said.

“Those are issues that we still need to work with the GLO on to make sure that we’re clear on how we should proceed,” Brown said. “I think it’s very important that we get written confirmation.”

The dunes are important protection to the island and property, and both Hurricane Laura and Tropical Storm Beta battered the beach, Brown said.

“The water comes around from behind the dunes and washes them out,” Sanford said.

Sanford is worried the beach damage has left the homes so close to the public beach that the state might try to claim them. And he’s also worried that, eventually, people on the beachfront could lose their homes, he said.

That’s bad for Galveston because these homes generate tax revenue, he said.

Normally, the land office gives the beach some time to recover from such significant erosion before it will take action like that, Gorman said.

These property owners and the builders were warned they were building too close to the water. Now they want taxpayers to repair their mistake?

I agree Gary, Texas and Galveston Island taxpayers should NOT be stuck with paying for private property repair or protection. I wonder where Carol Severance is nowadays?

Not in Galveston, that's for sure Don. She took her Federal buy out and cut her losses

There is a very good legal question here. The Severance case said the property continued to belong to the landowner if destroyed by a storm but to the State if impacted by erosion.

One of the sources of all the damage you see is the shoreline moves back about a foot a year so the storm surge has far less to travel each year. So what is the cause of this type of damage? Erosion or surge or both?

I can only imagine listening to the people quoted in the article that their realtors stopped a little short of full disclosure.

I agree with you two. This is what Babe Schwartz had envisioned with his Open Beach’s act that he championed for most his career. The property owners are prohibited from fencing or blocking off access to the public beach that their structures now sit on. However, I personally think that we should give the property owners some leeway to secure their homes and keep more damage from occurring. We should also allow some time to occur to see if the beaches rebuild themselves. We don’t need to repeat the Jim Mattox grand standing from years ago, claiming that the state now owns the property and that the owners should immediately remove their structures from the public land.

Maybe Mark Henry can take that approach though, since he is such a strict constitutionalist, and wants to follow the law at all costs. Maybe he can join in a lawsuit to sue the structure’s owners.