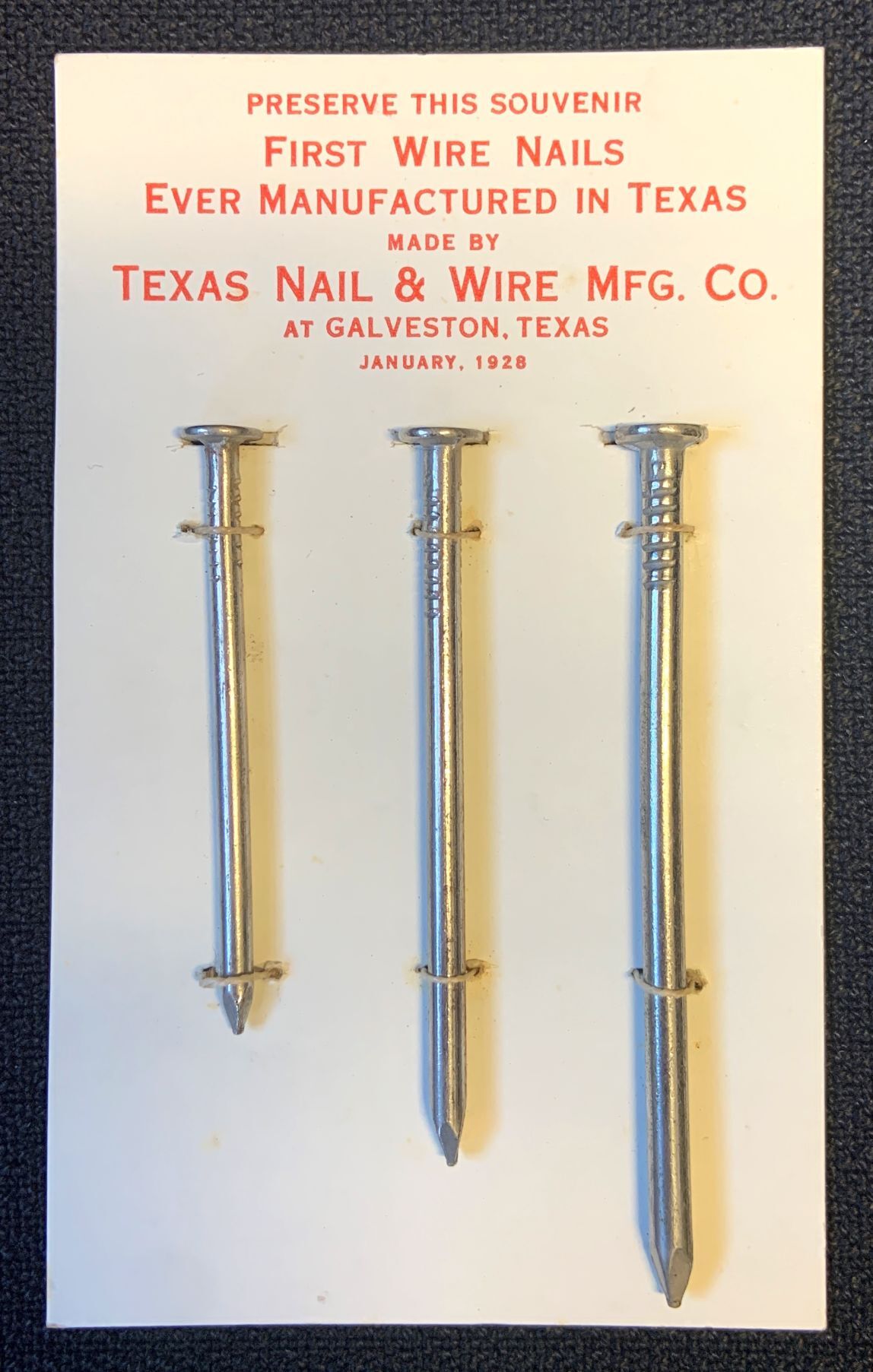 Souvenir nails from the first batch produced in Texas by Texas Nail and Wire Manufacturing Co. of Galveston. 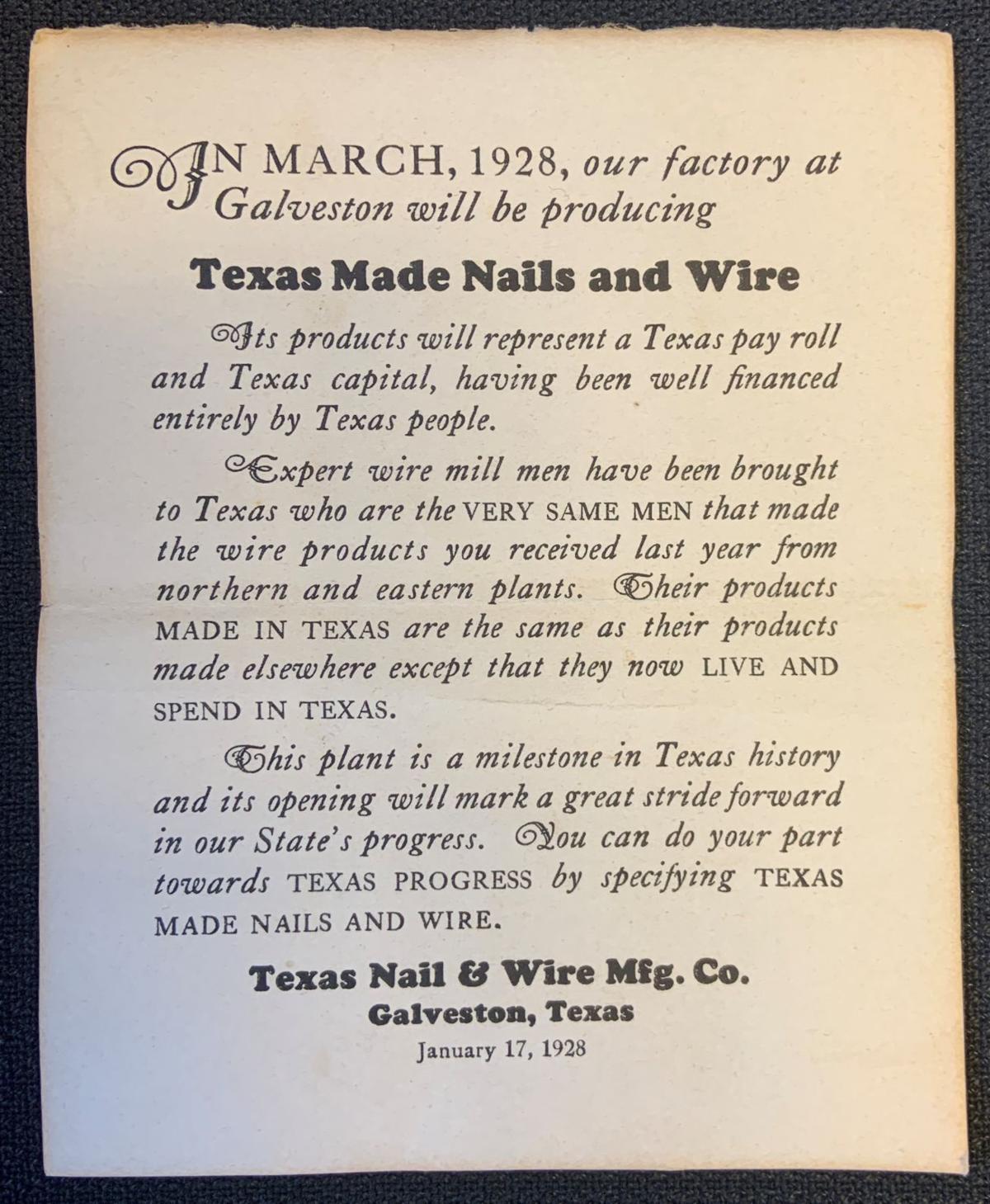 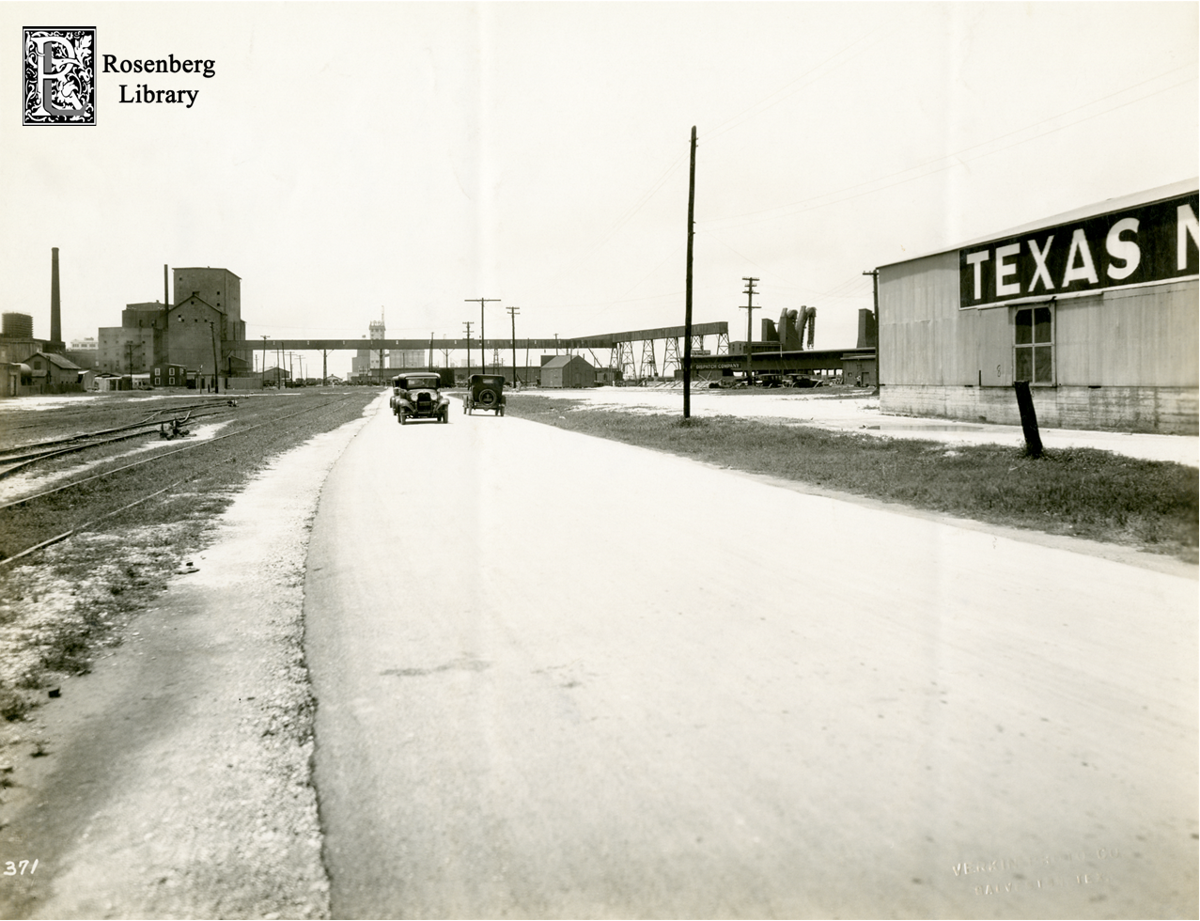 A portion of the Texas Nail and Wire Co. factory can be seen on the right side of this ca. 1930 photo of Harborside Drive.

Souvenir nails from the first batch produced in Texas by Texas Nail and Wire Manufacturing Co. of Galveston.

A portion of the Texas Nail and Wire Co. factory can be seen on the right side of this ca. 1930 photo of Harborside Drive.

This month, Rosenberg Library will exhibit a souvenir box of the first nails produced in January 1928 by the Galveston-based manufacturing company Texas Nail and Wire. The nails will be displayed on the library’s second floor near the east entrance at 2310 Sealy St.

Chartered in November 1927, Texas Nail and Wire Manufacturing Co. operated a state-of-the-art factory adjacent to the Galveston port. The sprawling plant was located along Harborside Drive between Piers 16 and 18, and the firm employed 60 workers. Texas Nail and Wire was a subsidiary of Black Hardware (founded in 1910) and was managed by John L. Somers.

Between 1790 and 1810, various nail-making machines were introduced in the United States, and hand-forged nails were eventually replaced by machine-made types. Texas Nail and Wire produced nails using soft iron called “rod” made by Bethlehem Steel Co. and shipped from Pennsylvania to Galveston.

The plant was equipped with 60 nail-making machines, each of which could produce nails of various shapes and sizes. On average, each machine could generate several hundred nails per minute. In addition to nails, Texas Nail and Wire produced iron spikes for industrial use, as well barbed wire for fencing.

Every week, several tons of nails were produced in Galveston. It was the only manufacturing plant of its type in the region, with the closest similar factory located approximately 700 miles away in Birmingham, Alabama.

In 1945, the Illinois-based Dickson Weatherproof Nail Co. assumed ownership of Texas Nail and Wire. Dickson continued to produce nails in Galveston until its closure during the 1970s. The plant was razed in 1975.

This sort of stuff is fascinating - these oh so very common items that we take for granted. When cleaning up around our house I've found old bricks that I've been able to trace back to their factories in other states, and bits of old pharmacy bottles with local names. I have a handful of old electrical insulators that carried fabric-covered wires 100 years ago, from our attic. After living my whole life in fresh new suburbs, Galveston truly is a treasure trove of history.