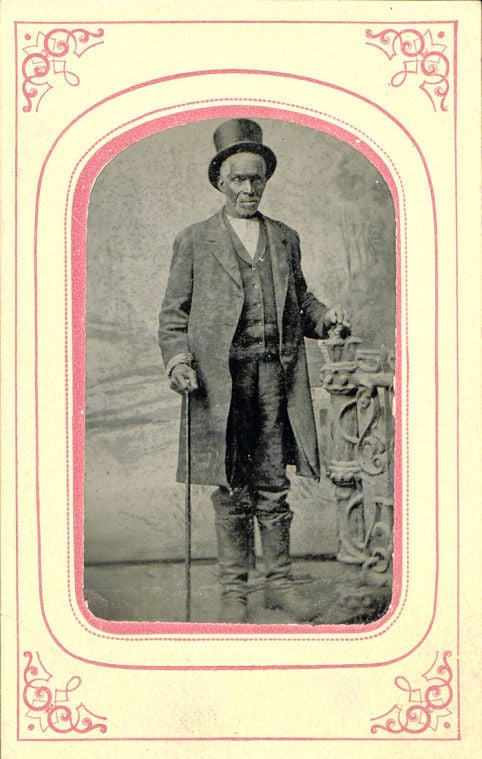 A tintype photograph of Uncle Bacchus, an African-American servant in the household of Jameson Moody in Virginia.

An original note, likely penned by Jameson Moody, is the pass Uncle Bacchus, an African-American servant in the Moody's household in Virginia, would have carried. It enabled slaves free passage throughout the community while tending to household business.

A tintype photograph of Uncle Bacchus, an African-American servant in the household of Jameson Moody in Virginia.

An original note, likely penned by Jameson Moody, is the pass Uncle Bacchus, an African-American servant in the Moody's household in Virginia, would have carried. It enabled slaves free passage throughout the community while tending to household business.

GALVESTON — Sharon Batiste Gillins knew she had discovered something of national significance the moment she opened the folder in the archives at Moody Mansion in Galveston.

It was a tintype photograph of an African-American slave known as Uncle Bacchus, a servant in the household of Jameson Moody in Virginia. The tintype is a clear and crisp image of an elderly gentleman in a studio setting.

His garments are likely staged. He wears a distinguished-looking, knee-length coat, white shirt, vest, high boots and a top hat. One hand holds a cane, while the other rests on the finial of an ornate fence post.

Tintype images were recorded on thin metal plates coated with a light-sensitive emulsion and processed in chemicals. Though the source of this photo is unknown, such pictures were often taken by itinerate photographers who set up portable studios at local fairs and exhibitions during the mid-1800s.

Most tintypes of this era are rusted and wrinkled today, and their images have faded. Not so with this artifact, which remains pristine in its original paper portfolio.

Gillins is a genealogist and research associate for the Mary Moody Northen Endowment, which operates the restored Moody Mansion on Broadway. She found the Uncle Bacchus treasures while researching the Moody family tree.

Along with the photograph, in a folder labeled “Employees and Acquaintances,” was an equally well preserved but unsigned note saying Bacchus was Jameson Moody’s body servant during the War of 1812 and that he drove the carriage when Jameson Moody and Mary Susan Lankford eloped.

“I opened the folder and was struck by the clarity and quality of the image,” Gillins said. “The story it told was entrancing, a look at the life of a slave in America. The fact that the family preserved this photo along with the description, and that Uncle Bacchus apparently played such a significant role in the family’s life, speak volumes about the complex relationship that existed between them.”

Gillins thought of the Smithsonian Institution and its National Museum of African-American History and Culture scheduled to open next year on the National Mall in Washington, D.C.

She and Betty Massey, Mary Moody Northen Endowment executive director, consulted with endowment board members Edward L. Protz, G. William Rider and Robert L. Moody Sr. The board recognized the national historical value of the artifacts and decided after careful consideration to offer the artifacts to the Smithsonian as a means to advance understanding of the institution of slavery in America.

Gillins contacted curators at the Smithsonian, who expressed immediate interest and subsequently voted to add the artifacts to the Smithsonian’s national collection. Smithsonian staff also asked Gillins to dig deeper into the Moody Collection for more information about Uncle Bacchus, resulting in another find: An original note most likely penned by Jameson Moody, which Bacchus would have carried with him in Essex County, Va., as a “barrow,” a seller of fruits and vegetables from a wheeled cart.

Such passes enabled slaves free passage throughout the community while tending to household business. Smithsonian curators revealed that few of these rare artifacts have survived and that they had never seen one.

“To know Uncle Bacchus actually carried this note with him, held it in his hands a century and a half ago, and now I have held it in my own hands, created a real connection with this man,” Gillins said. “It was thrilling, and I’m so grateful the endowment’s board of directors is sharing it with the rest of America.”

Gillins estimates Uncle Bacchus was born in the late 1700s, since he would have been at least in his teens to have served Jameson Moody in the War of 1812.

She said she believes Bacchus spent his entire life with the family because he served in the War of 1812 with Jameson Moody, drove the carriage for his elopement in 1816 and came to Texas with members of the family in the early 1850s.

Because the tintype was so well preserved, Gillins said she believes his extended relationship was well recognized by family members. Nothing is known of Uncle Bacchus’ life after Emancipation or even if he lived to see it. Gillins estimates he would have been in his 70s by the time of the Civil War.

Possible references to him can be found in the early census records from Chesterfield and Essex County, Va., and in the 1850 Slave Census of Freestone County.

Since enslaved people were not identified by name before the 1870 census, earlier census records provide indirect evidence such as age and gender; confirmation of Uncle Bacchus’ identity would require additional research in sources such as probate and property records.

Jameson Moody was the patriarch of the Moody family in Chesterfield. His son, William L. Moody, moved from Virginia to Fairfield, served as a Confederate colonel in the Civil War and was a founder of the Texas Seventh Infantry. He moved to Galveston after the war and founded a thriving cotton factoring business.

He was among the richest men in Texas, and his fortune established the Moody Foundation — which has had an untold impact on philanthropic efforts in Texas, Virginia, Galveston and elsewhere in the United States.

WHERE: 2618 Broadway, in Galveston 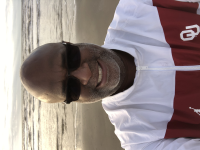 Congrats Sharon on your excellent work and amazing discovery. I am glad the Moody family was willing to share these national treasures. I look forwad to visiting the Smithsonian.

Thanks, but real kudos go to MMNE.

I dare to dream Uncle Bacchus will be among the first exhibits at the 2015 grand opening of the Smithsonian's National Museum of African American History and Culture. I dare. -Sharon

Let us also dare to dream that the aforementioned National Museum of African American History will have more than a footnote section related to the events of June 19, 1865

Excellent work Ms. Gillans! Keep looking. Keep finding. Thanks also to Mary Moody Northern Endowment for hanging on to such historically significant pieces and for making this monumental donation.

Hope there is more!