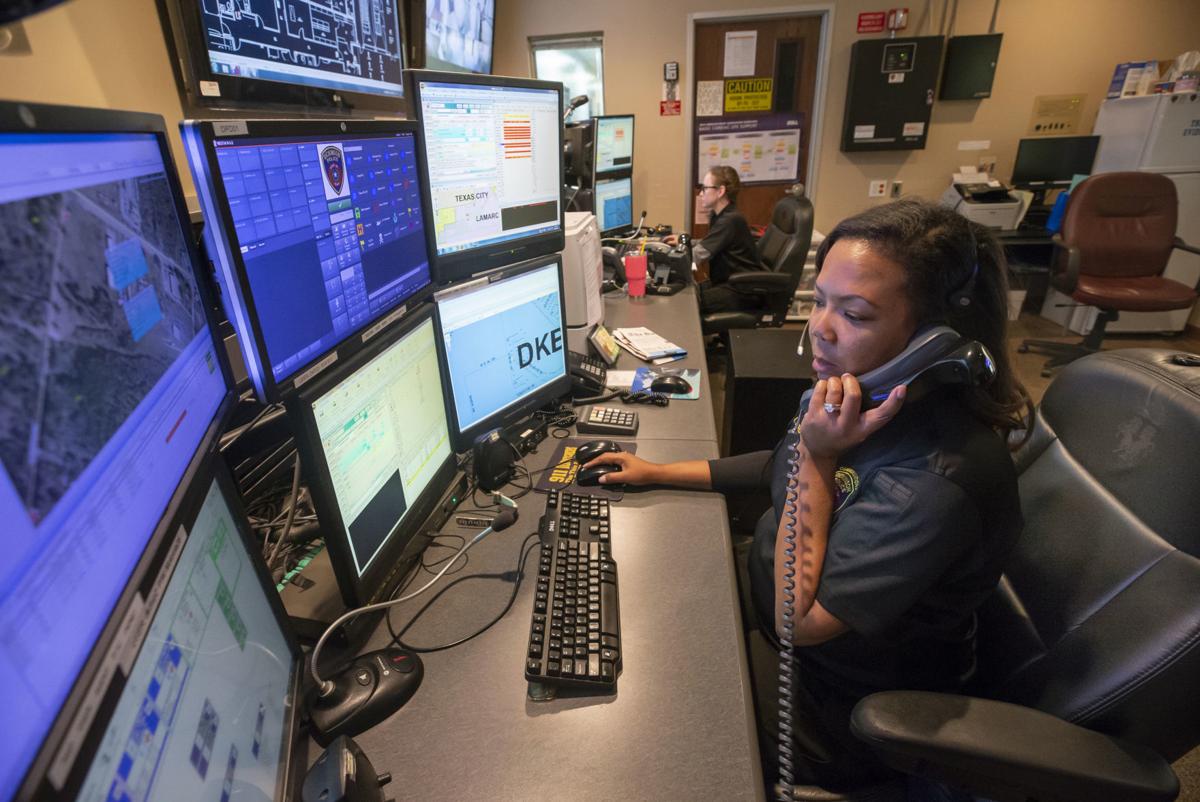 Dickinson dispatch operator Vernita Rawls takes a call in front of a bank of monitors in the dispatch room at the Dickinson Police Department on Tuesday, May 15, 2018. 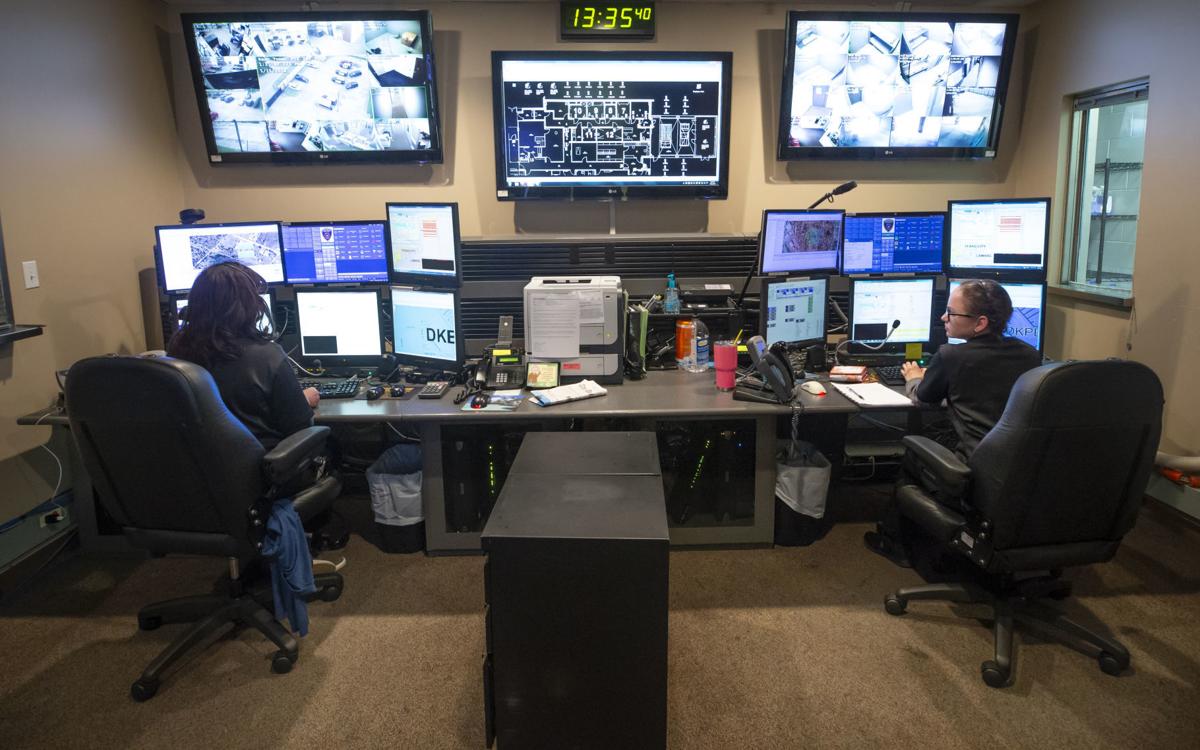 Dickinson dispatch operators Vernita Rawls, left, and Shajira Cocco work in the dispatch room at the Dickinson Police Department on Tuesday, May 15, 2018. 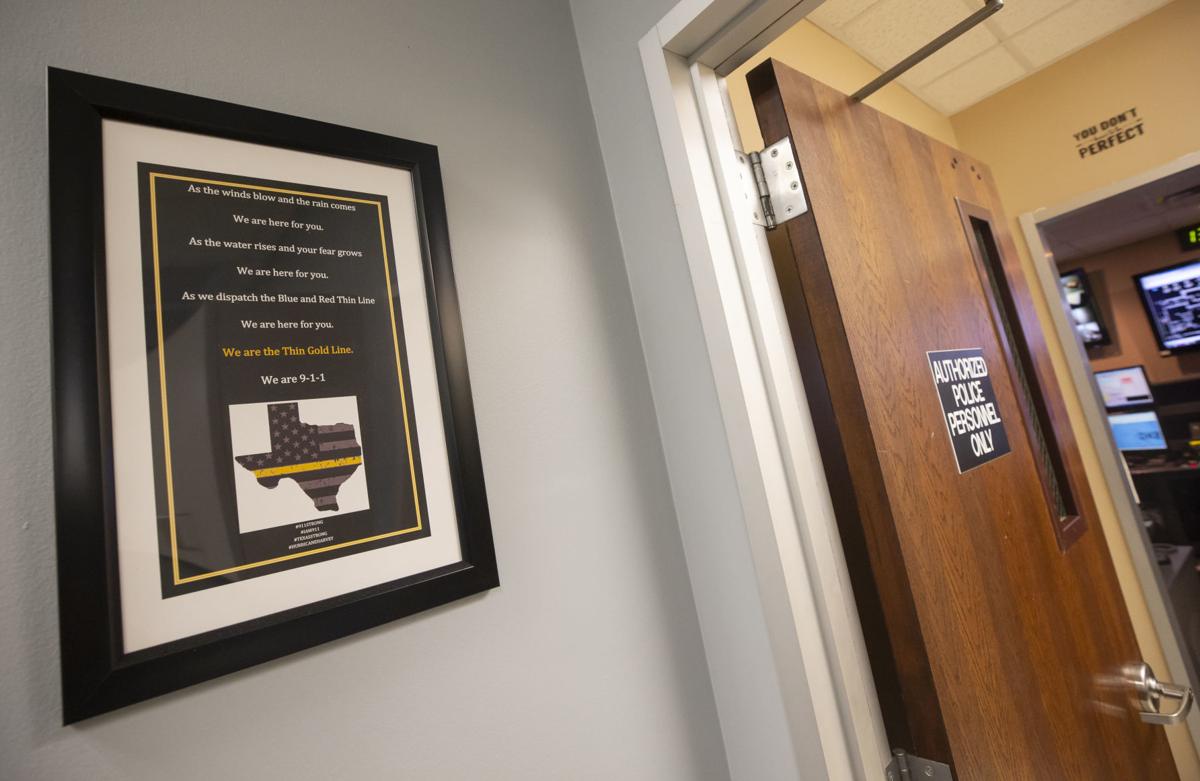 A framed sign commemorating the work of dispatch operators during Hurricane Harvey hangs on a wall outside the dispatch room at the Dickinson Police Department on Tuesday, May 15, 2018.

Dickinson dispatch operator Vernita Rawls takes a call in front of a bank of monitors in the dispatch room at the Dickinson Police Department on Tuesday, May 15, 2018.

Dickinson dispatch operators Vernita Rawls, left, and Shajira Cocco work in the dispatch room at the Dickinson Police Department on Tuesday, May 15, 2018.

A framed sign commemorating the work of dispatch operators during Hurricane Harvey hangs on a wall outside the dispatch room at the Dickinson Police Department on Tuesday, May 15, 2018.

There were only a few evacuation warnings before Hurricane Harvey came.

In the days and hours before the hurricane made landfall, local emergency management officials were most worried about the threat of storm surge and Harvey’s strong winds.

If the track took a turn north, the storm would have been strong enough to prompt a full-scale mandatory evacuation from not only Galveston Island, but communities inland. That didn’t happen, though, and by the time Harvey’s rains came to Galveston County, many locals had the feeling they’d dodged a bullet.

In the first hurricane season since Harvey, local emergency management officials say they’ve changed some things about the way they plan to respond to storms — while they also stood by the fundamentals of hurricane response that form the basis of the local emergency response plans.

Galveston County and its cities are still mostly unprotected from the type of damage that a large, powerful hurricane can cause, either with strong winds or flooding.

In the nine months since Harvey came to Texas, there have been no new hurricane protection measures installed or constructed in Galveston County.

Since Hurricane Ike in 2008, there have been no large-scale construction projects that would stop the kind of storm surge flooding that happened during that event.

“Nothing’s been added,” said David Popoff, the emergency management coordinator for the city of Dickinson, one of the cities that sustained the most damage during Harvey’s floods.

That lack of protection, and the fact that many people in the city will still be rebuilding during the 2018 hurricane season, could cause challenges, Popoff said.

There have been smaller changes in the aftermath of Harvey that local emergency management officials say could help in the response to future storms.

The city also has switched its reverse 911 service to a new system, called SwiftReach, which allows the city to better target neighborhoods affected by an ongoing disaster.

While the city transferred contact information from its old system, called Blackboard, to the new one, Edghill said a lot of time and effort in the buildup to hurricane season was being spent getting people to sign up for the new system, which can be done at the city’s website.

Similarly, Popoff said that Dickinson was hoping people would go to the city and share their most current contact information.

“One of the things that we learned after Hurricane Harvey is that a lot of residents were not maintaining their communication accounts,” Popoff said.

That’s important because it’s one of the primary ways the cities get information about evacuations, or even rescues, during a crisis.

On Galveston Island, which sustained less damage than other communities during Harvey, thoughts also were turning to communication. Galveston this year joined the Texas Health and Human Services Commission 211 program, a free helpline program that can connect people in need with resources, including a sign-up list for people who would need help evacuating during a storm.

The city also was working to ensure it had plans to manage resources in case the island’s supply lines were cut off during future storms, said Niki Bender, emergency management coordinator. For a brief time after the rains came, routes between Galveston and Houston were cut off by floodwaters, causing some worries about food or gas shortages on the island.

Fortunately, the roads reopened relatively quickly after Harvey, she said.

“We’ve done some additional planning for resources,” Bender said, adding that the number of restaurants and hotels on the island do help lessen the chance of a food shortage emergency.

But as much as Harvey changed the way people think about storms, local emergency managers said people’s plans going into a new hurricane season should remain mostly the same.

Have an evacuation plan. Listen to local officials. Heed those officials when they tell you to leave or to take shelter.

There is some worry that people will change their plans based on what they experienced in Hurricane Harvey. Some of the places that were ordered to evacuate during the storm, like Galveston’s West End, ended up being less damaged by the storm than places inland.

But every storm is different, the managers said. Popoff and others stood by the decisions they made last August about where and when to evacuate. Those calls were made when the storm was still 72 hours from landfall — when agreements between Galveston communities and other parts of the coast say they must be made — and with the best available information.

“To rely on what Harvey did or did not do last year is not recommended,” Popoff said. 