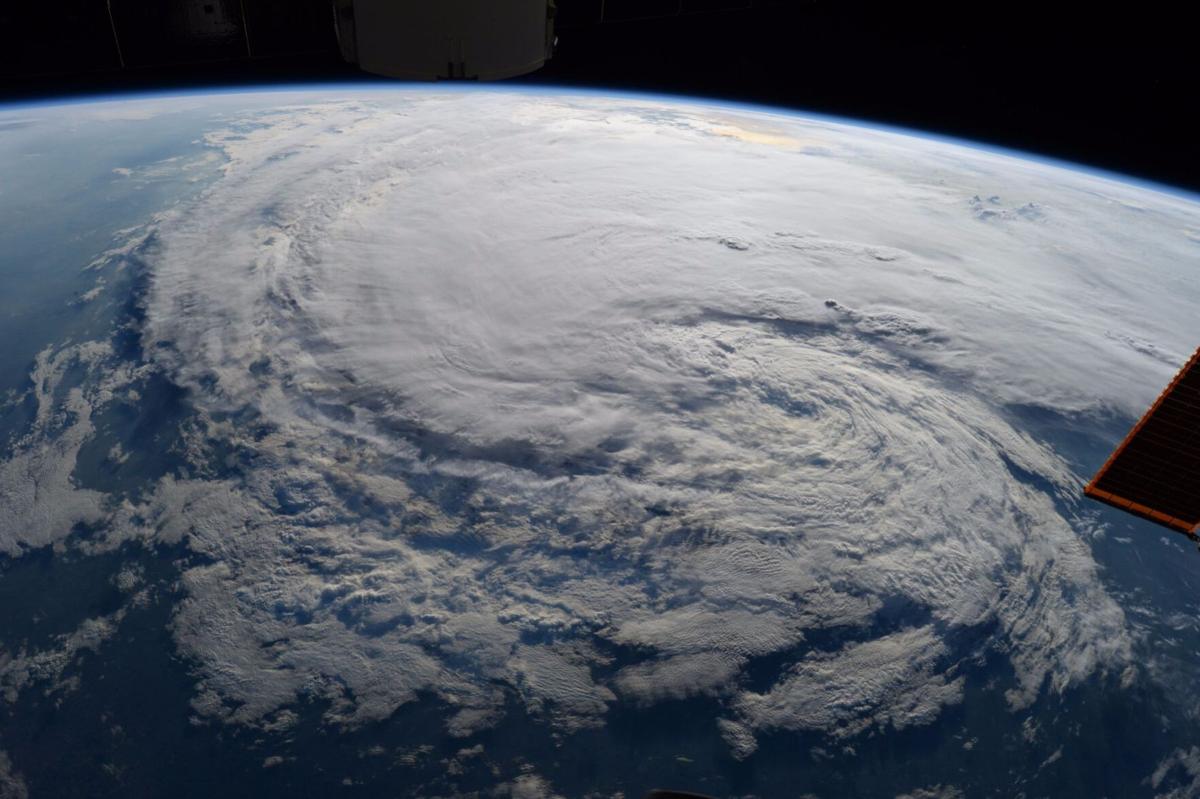 Astronaut Randy Bresnik took this photo of Tropical Storm Harvey from the International Space Station on Aug. 28, 2017. Harvey made landfall in Texas on Aug. 25, 2017, as a Category 4 storm and then stayed in place for four days, dumping a deluge of rain across the region. Research suggests that recent hurricanes weaken more slowly after making landfall than they did 50 years ago, due to climate change. 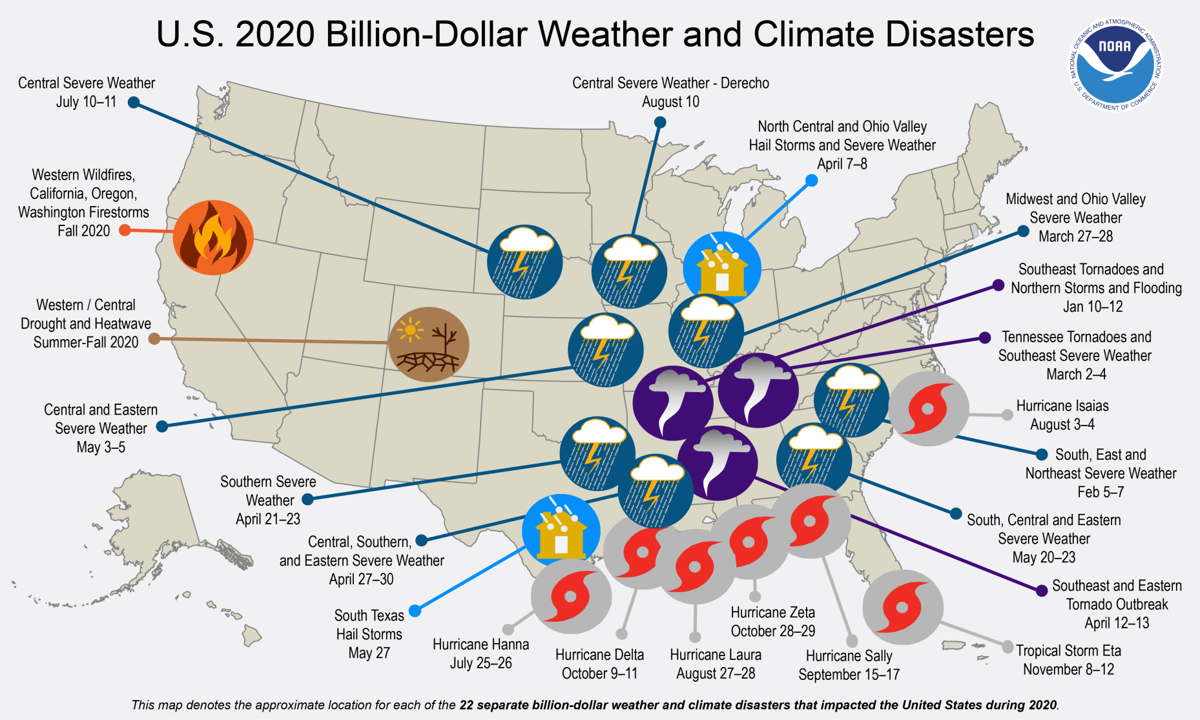 In 2020, the United States experienced a record-smashing 22 weather or climate disasters that each resulted in at least $1 billion in damages, including a record seven linked to landfalling hurricanes or tropical storms. 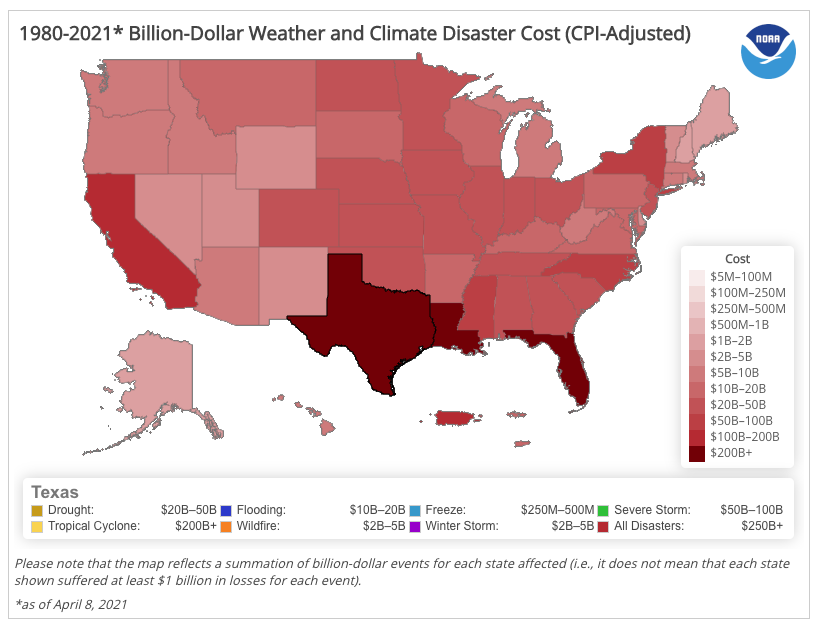 Astronaut Randy Bresnik took this photo of Tropical Storm Harvey from the International Space Station on Aug. 28, 2017. Harvey made landfall in Texas on Aug. 25, 2017, as a Category 4 storm and then stayed in place for four days, dumping a deluge of rain across the region. Research suggests that recent hurricanes weaken more slowly after making landfall than they did 50 years ago, due to climate change.

In 2020, the United States experienced a record-smashing 22 weather or climate disasters that each resulted in at least $1 billion in damages, including a record seven linked to landfalling hurricanes or tropical storms.

Hurricanes are not just intensifying faster and dropping more rain. Because of global warming, their destructive power persists longer after reaching land, increasing risks to communities farther inland that may be unprepared for devastating winds and flooding, recent science shows.

That shift was underlined by an analysis of Atlantic hurricanes that made landfall between 1967 and 2018. The study, published Nov. 11 in Nature, showed that in the second half of the study period, hurricanes weakened almost twice as slowly after hitting land.

“As the world continues to warm, the destructive power of hurricanes will extend progressively farther inland,” the researchers wrote in their report.

Scientists have known for some time that as global temperatures warm, hurricanes are intensifying and are more likely to stall and produce rain.

But Pinaki Chakraborty, senior author of the study and a climate researcher with the Okinawa Institute of Science and Technology, said the new analysis found that with warming hurricanes also take longer to decay after landfall, something researchers had not studied before.

“It was thought that a warming world has had no pronounced effect on landfalling hurricanes,” Chakraborty said. “We show, not so, unfortunately.”

Tropical storms and hurricanes are the costliest climate-linked natural disasters. Since 2000, the damage from such extreme storms has added up to $831 billion, about 60 percent of the total caused by climate-related extremes tracked by a federal disaster database.

Penn State University climate researcher Michael Mann, who was not involved in the Nature study, said the findings make clear that when hurricanes that already are intensified persist over land, they are likely to do more damage.

“Since flooding is the major cause of death and destruction from landfalling tropical storms, this study suggests the potential for even greater risk than has been established in past studies,” Mann said.

“It’s a simple idea, but it requires quite a bit of work to establish that this is really happening. And that’s what the authors, in my view, have done here.”

Noting the findings, Jim Kossin, a hurricane expert with the National Oceanic and Atmospheric Administration, who also did not participate in the study, said, “I find it somewhat remarkable that these trends we keep discovering are so disproportionately for the worse.”

Even as scientists scrutinize hurricane trends from the past few decades to find global warming connections, the 2020 season set a record for the total number of named storms: 30 through Nov. 11, more than five a month in the official six-month hurricane season, which lasts from June 1 to Nov. 30.

Research since then has made clear that the projection for fewer storms is very uncertain, even though the idea that the number will decrease has been widely repeated as conventional wisdom.

And there is even stronger evidence that more intense major hurricanes will cause increasing damage. Recent studies also show regional nuances, projecting more tropical storms for Hawaii, as well as for the Northeastern United States and even Europe.

Hurricanes are tiny and irregular features in the larger fabric of global climate change, and previous projections for fewer tropical storms were based on climate models that weren’t good at simulating the formation and development of hurricanes, said Peter Pfleiderer, a Berlin-based extreme climate researcher with Climate Analytics, an international nonprofit climate research center.

For Chakraborty, the Nature study’s senior author, the “aha!” moment came even before the research started.

Hurricanes hold more moisture in a warmer climate because the atmosphere can hold about 7 percent more water for every 1.8 degrees Fahrenheit of warming. Part of a hurricane’s total energy is stored in the water it carries, and that extra fuel helps storms overpower the weakening effect of friction over land, he said.

The scientists examined the link between global warming and slower weakening by modeling hurricanes forming at different sea surface temperatures and then simulating landfall by cutting off the storms’ moisture supply. Each of the modeled storms made landfall at the same intensity, but the ones that developed over warmer waters weakened more slowly.

“Making landfall is equivalent to stopping the fuel supply to the engine of a car,” said co-author Lin Li, also with the Okinawa Institute of Science and Technology.

“Without fuel, the car will decelerate, and without its moisture source, the hurricane will decay.” But, storms forming over warmer oceans have more stored fuel, so they keep running longer after the outside supply is cut off, he said.

The new study on slower hurricane decay is important because it can help show how trends fit into the long-term historical context, said Amy Frappier, a paleoclimate researcher at Skidmore College in New York.

Lisa Baldini, a paleoclimate researcher at Teesside University in the United Kingdom, said “recognizing that warmer oceans can cause landfalling hurricanes to track farther inland is “critical information that can enhance preparedness.” But Baldini said the new study also spanned a time period when natural climate cycles that affect hurricanes might have skewed the results. Looking back further in time with chemical clues from cave formations and sediment deposits, could help assess the accuracy of the findings, she said.

Those paleoclimate records show how hurricane paths have shifted over centuries and millennia, which also may affect their strength after landfall because their path over the ocean also determines how much moisture they gather.

In a 2016 study in Scientific Reports, Baldini found hurricane paths have changed significantly in the past 450 years.

“So, I think that we need longer records to assess the long-term trend,” she said. “And, we need to look at regional impacts rather than basin-wide trends. Where the tracks are trending is just as important as how many there are when it comes to hurricane preparedness.”

MIT hurricane researcher Kerry Emanuel said the rate of hurricane weakening after landfall is an “important practical question as it potentially affects decisions to evacuate people.” But the results of the new study don’t mesh with some existing theories and may be sensitive to the way the data were analyzed, he said.

“I am persuaded that this is an important problem but do not regard the results as definitive. More research will be necessary to confirm or refute the findings,” Emanuel said.

Sea level rise and more intense storms make up one of the many compounding and unexpected threats of global warming, Frappier said. The new research on the inland persistence of hurricanes reminded her of one this year’s first storms, Cristobal, which formed June 1 and remained a tropical system until it reached Wisconsin 10 days later.

Other paleoclimate studies of tropical storms suggest another type of compound effect, she said. Layers of sediment deposited by long-ago storms match up with traces of ash in ways that suggest that powerful storms knock down trees, which subsequently dry and form fuel for big wildfires.

This year’s hyperactive Atlantic hurricane season also has led to unprecedented and long-lasting, widespread flooding on Mexico’s Yucatan Peninsula, where garages, underpasses and other infrastructure has been swamped this summer.

Rosanne Martyr-Koller, who studies coastal vulnerability and adaptation with Climate Analytics and was not involved in the research, said the new study can help people in hurricane risk areas update plans for protecting homes, infrastructure and agriculture.

Even inland communities need to consider increasing risks from wind damage and flooding with hurricanes weakening more slowly, and more widespread effects require more regional preparation, she said. For example, inland communities along rivers can reduce pollution, which bolsters coastal ecosystems like mangroves and corals that, in turn, buffer coasts from hurricane impacts.

“Communities are more likely to be exposed to a storm’s powerful winds, rain, and storm surge for longer periods than in the past, leading to increased damages,” she said. “This study provides a piece of the puzzle to understand why hurricane damage costs have been increasing over time.”

Inside Climate News is a nonprofit, independent news organization that covers climate, energy and the environment. Sign up for the ICN newsletter at insideclimate news.org. 