Congregation Beth Jacob celebrates Hanukkah in pre-pandemic times in 2019. This year’s observance will allow all to participate from their cars. 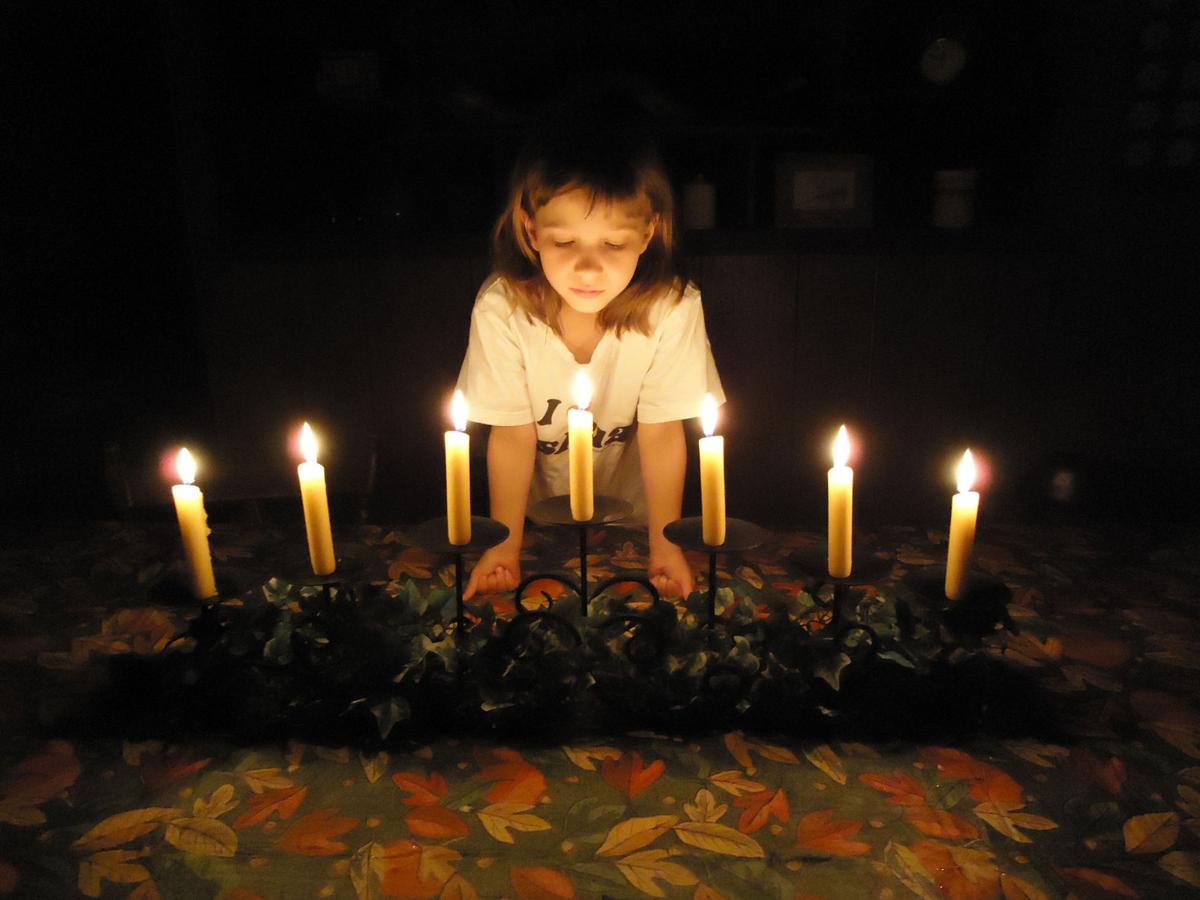 A child is mesmerized by a Hanukkah menorah. The Festival of Lights is symbolized by this eight-candle display, which begins next week. 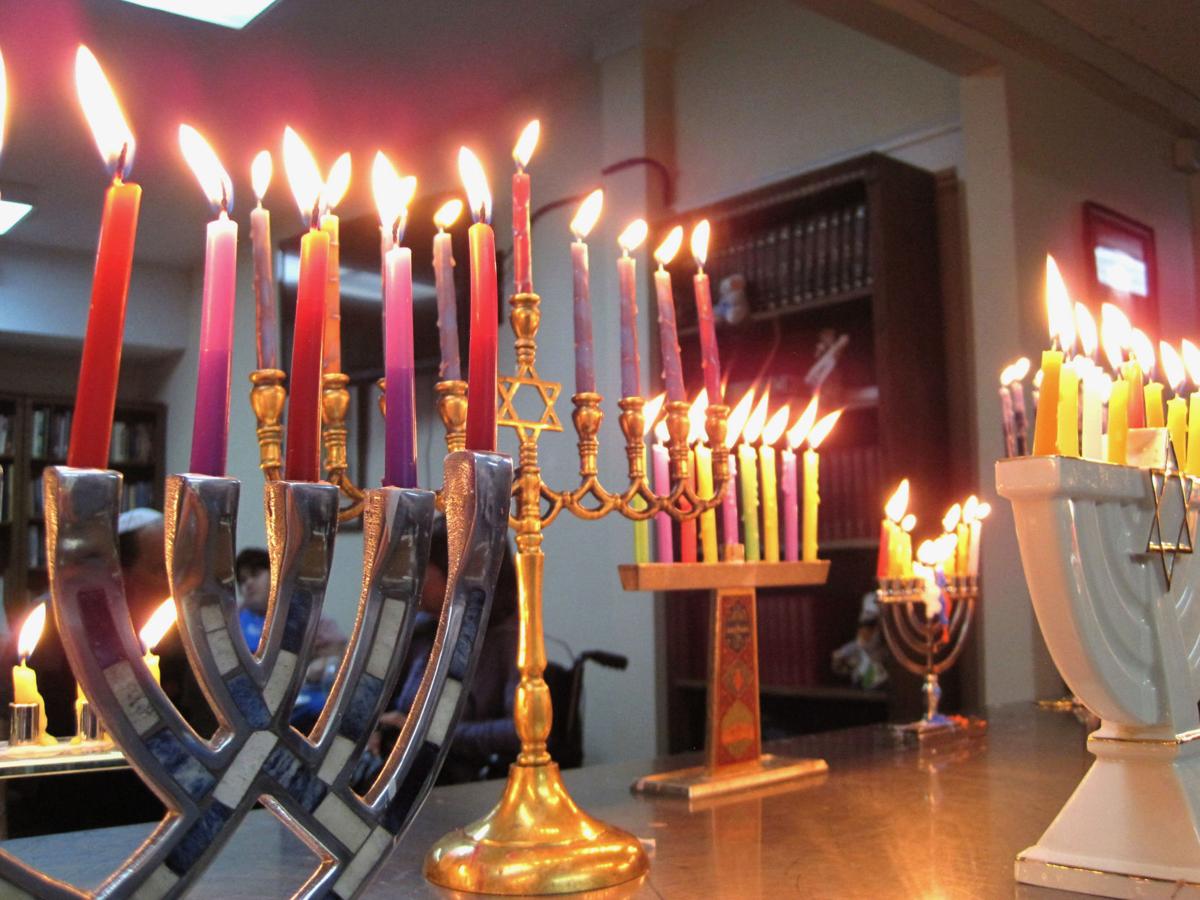 Pictured is a collection of menorah candelabras brought by member of Galveston’s Congregation Beth Jacob to last year’s Hanukkah celebration. This year will be very different given COVID-19.

Congregation Beth Jacob celebrates Hanukkah in pre-pandemic times in 2019. This year’s observance will allow all to participate from their cars.

A child is mesmerized by a Hanukkah menorah. The Festival of Lights is symbolized by this eight-candle display, which begins next week.

Pictured is a collection of menorah candelabras brought by member of Galveston’s Congregation Beth Jacob to last year’s Hanukkah celebration. This year will be very different given COVID-19.

Hanukkah will be a special Jewish family event all over the world beginning at sundown Thursday as it has been for well over 2,000 years and counting.

How will COVID-19 change this Festival of Lights, which celebrates a successful Jewish revolt against foreign oppression? We asked the fine folks of Galveston’s Congregation Beth Jacob for their thoughts.

“It’s a traditional Jewish holiday, but its observance does not appear in the Torah,” she said. “Like all celebrations linked to ancient incidents, the legend of the one-day supply of oil that burned in the eternal flame over the ark in the restored temple for the eight days it took to travel to a source of oil and back can be considered true or myth.

“It does inspire faith in miracles but reminds us that even miracles need to be earned,” she said.

Congregant Diane Wonio described some of the foods that make Hanukkah special, especially to children.

“Every holiday in the Jewish tradition seems to be centered around special foods and delicacies.” she said. “All Jewish holidays are primarily centered in the home, and Hanukkah is a prime example.

“And then there are the sufganiyot, the jelly doughnuts which are especially popular in Israel,” Wonio said. “If you aren’t inspired to make your own, Dunkin’ Donuts will be happy to provide.”

Wonio added that traditional gift giving for the holiday will probably lean toward online sites now.

Both women noted that extended families will probably turn to Zoom this year to virtually gather for the holiday, which runs through Dec. 18. That’s a far cry from the way fellow member Marc Weiss remembers the island celebrations of six decades ago.

“Our extended Shreiber family gathering was at Hanukkah time each year at the old F & T Hall in Galveston” he said. “The soiree was comprised of potluck meals and cheesy, crepe paper decorations and games with us kids running around the hall non-stop chasing each other until, much to our disappointment and our parents’ relief, it was time to leave and go to bed with visions of spinning dreidels dancing in our heads.

“That party, although quite simple, was always one of the most fun events of the year,” he said.

Meris Hamilton grew up in the far-off New York City borough of the Bronx. She added her earliest Hanukkah recollection.

“We lived one block off the Grand Concourse there,” she said. “The menorah was on the bookcase in our living room, and if I close my eyes, I can see my grandfather there, picture the room, hear the sounds in the alley outside our window, smell dinner cooking in the kitchen and feel the heat coming up through the radiator from the basement below.”

Her grandfather, who she called Poppy, came over each night to light the Hanukkah candles since her father couldn’t make it home on the subway in time for sundown.

“Every night of Hanukkah, Poppy would show up with a bright, shiny, silver dollar, one for me and one for my sister,” Hamilton said. “He had gone to the bank to make sure that our Hanukkah gelt (the Yiddish for ‘gold’ or ‘money’ in general) was special.

“Two wide-eyed little girls were suitably impressed,” she said. “We both still have silver dollars tucked away in special places. We were truly blessed.”

We’ve been looking at history, not math, but a final lesson on the latter might be in order. This, from Wendy P. Kane of Clear Lake’s Shaar Hashalom, who started out not with silver dollars, but with five-cent coins.

“In 1961, my father was out to sea aboard U.S. Navy aircraft carrier Bennington, leaving my mother, my sister and me to celebrate by ourselves,” she said.

“Funds were limited, but our mother still wanted to continue the tradition of small gifts every night. So she came up with the idea of giving us a nickel the first night and doubling the next night to a dime.” Kane said. “My poor mother did not quite understand how such mathematical series work, but we had a most profitable Hanukkah with lots of gelt to play the dreidel game.”

The total value of that nickel if doubled on each of seven successive nights would have come to something like $12.75 by our reckoning, a significant stretch for Kane’s mom then, but a pretty good deal now, for gelt.

Next week in Our Faith: How the faithful can help fight human trafficking in our area.

Where: Park along the curb of 24th Street near Avenue K in Galveston

Songs and other festivities will be broadcast by FM transmitter to car radios. Refreshments and party favors will be distributed to the vehicles by masked and gloved volunteers. A short movie and cartoons will be displayed on an outdoor screen.