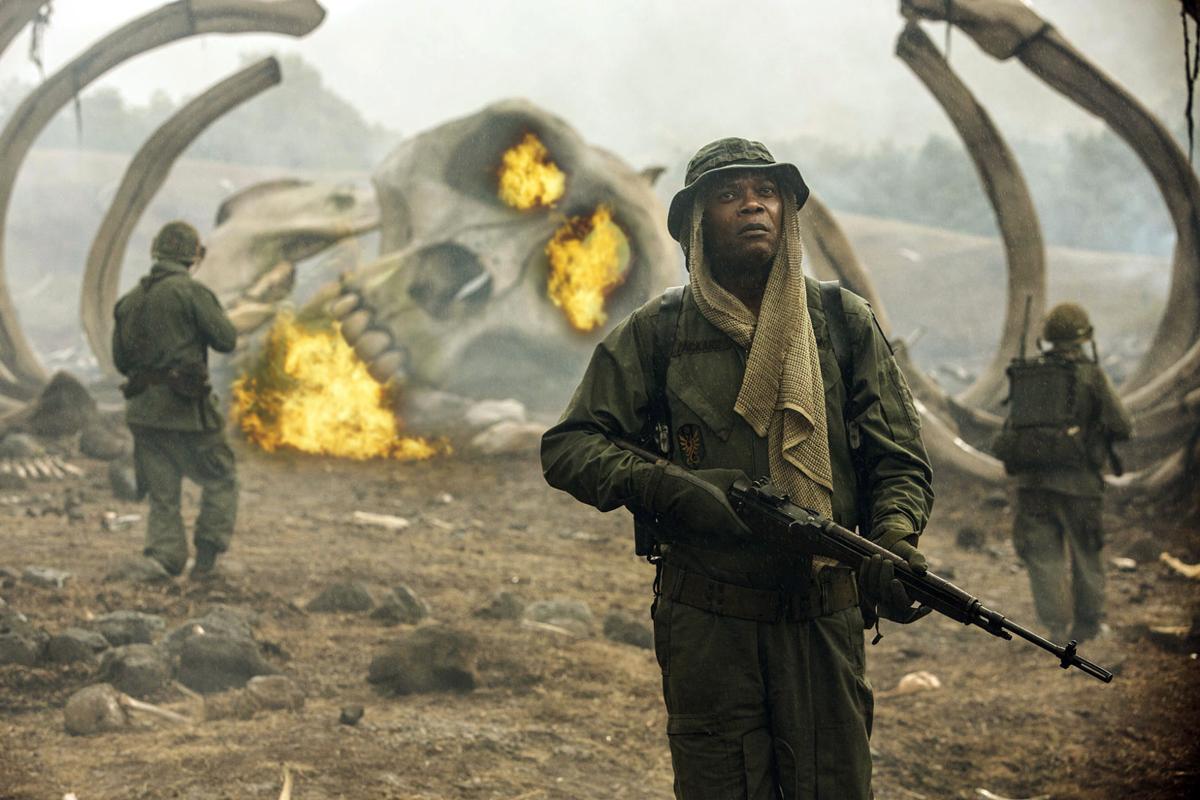 This marks the fifth big-screen adaptation of King Kong, and only 12 years after Peter Jackson (“The Lord of the Rings”) put him back on screen.

Jordan Vogt-Roberts’ sophomore film is an enormous leap from the tiny independent movie “The Kings of Summer” (2013) to this nearly $200 million dollar monster flick.

What works is the initial set up (heavily borrowing ideas from Michael Crichton’s “Jurassic Park”), placing the story in the mid-70s worked for the X-Men reboot, why not here too. The production design is visually captivating with editing choices that are creative even when they are not effective.

However, Kong’s unofficial kick off to summer is a letdown with too many human characters, an inordinate number of monsters, disproportionate fights between different human groups, various monster species, then humans and monsters, it’s a cluttered romp.

Bill Randa (John Goodman) has just received funding from a Washington senator (brief appearance by Richard Jenkins) to explore an uncharted island in the South Pacific.

With him are scientists, a war photographer, ex-British Special Services, and a military escort lead by Lt. Colonel Preston Packard (Samuel L. Jackson). Their roaring helicopters are welcomed by the lush tropical island below, but a massive gorilla wreaks havoc on their arrival. The survivors are separated into groups and completely unprepared for the creatures they encounter. The expedition turns into a survival mission, with each team arguing on how to proceed. They learn Kong, as he is called, is king of the island, keeping far more destructive creatures in check.

“Hold on to your butts,” Packard says in the early moments of the film. Clearly a blatant homage to Jackson’s “Jurassic Park” character who uttered the same phrase before he turned the power back on. There are little to no small intimate moments like Spielberg’s timeless 1993 dinosaur flick.

The plethora of named characters, all vying for screen time and relevance, dilute any interest the audience has in characters’ well-being. I can’t even remember a single character’s name, and I was taking notes. Each actor is playing a function, more than a role. The Photographer, The Mercenary, The Instigator, The Wild Card, etc. Unlike Caesar in “Rise of the Planet of the Apes,” Kong isn’t given much of a personality, a beast with fragmented intelligence.

Deadly spiders, skull eaters, giant wooden grasshoppers, “Kong: Skull Island” has no limit to the amount of distractions and subplots they are willing to explore. Contrasted with the intelligent and inventive “Planet of the Apes” reboot, Kong skims any real socially relevant message. Thankfully the script stays away from any sort of romantic interlude.

The diverse cast is noted, despite the random Asian character (Tian Jing from “The Great Wall”) given absolutely nothing to do. “Kong: Skull Island” becomes one ridiculous battle or continual escape that never pauses to relish in the moments happening around them. With such an acclaimed cast this reboot not only proves unnecessary but highly disappointing.

Final Thought — Too many characters/monsters render this reboot bloated and disorganized.