This image released by Universal Pictures shows Dean-Charles Chapman, left, and George MacKay in a scene from “1917,” directed by Sam Mendes. 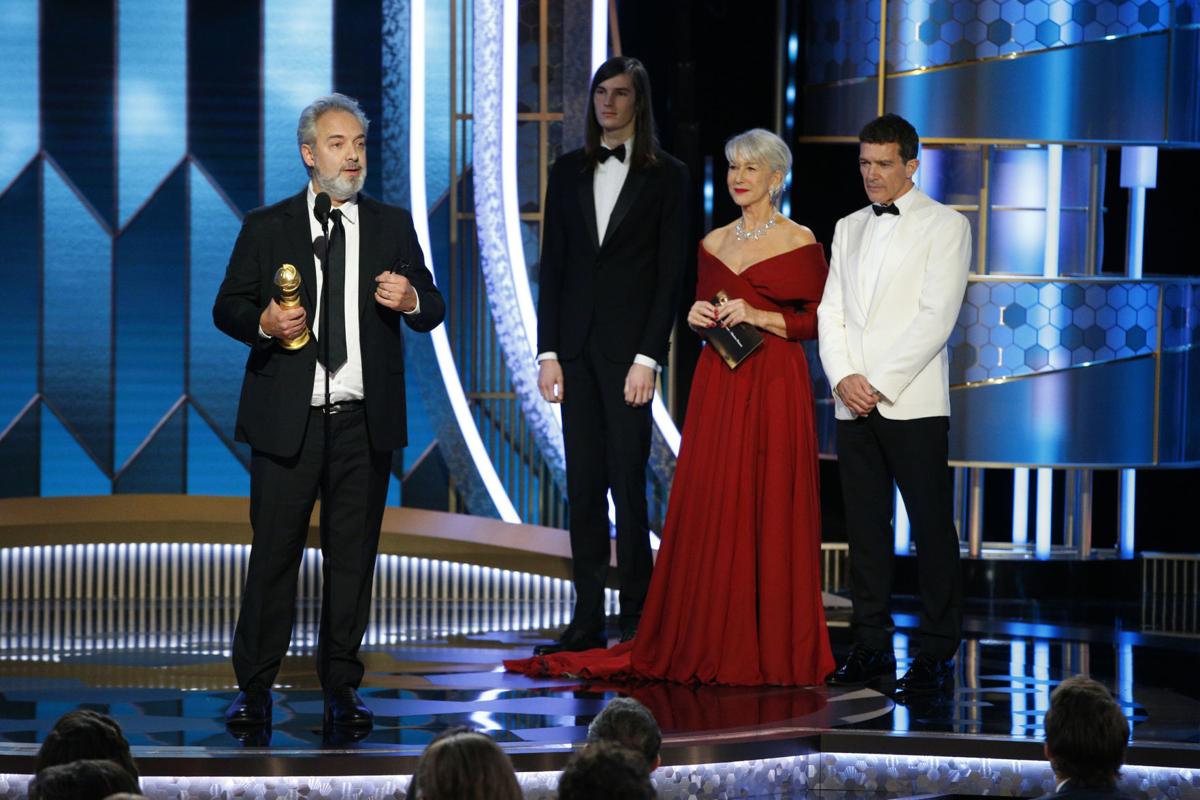 This image released by NBC shows Sam Mendes accepting the award for best director for the film "1917" as presenters Antonio Banderas, right, and Helen Mirren look on at the 77th annual Golden Globe Awards at the Beverly Hilton Hotel in Beverly Hills, California, on Jan. 5.

This image released by Universal Pictures shows Dean-Charles Chapman, left, and George MacKay in a scene from “1917,” directed by Sam Mendes.

This image released by NBC shows Sam Mendes accepting the award for best director for the film "1917" as presenters Antonio Banderas, right, and Helen Mirren look on at the 77th annual Golden Globe Awards at the Beverly Hilton Hotel in Beverly Hills, California, on Jan. 5.

How can the guy who directed “Skyfall” also be the same person behind “Away We Go?” This same man directed the brilliant cinematic crime film “Road to Perdition” before jumping to intimate family drama “Revolutionary Road.”

Mendes’ range doesn’t necessarily speak to his talent and skill, nor does it prove to be consistently successful. His first war film, “Jarhead” is the perfect example.

His second war film is the most challenging project of his career and just won him best director at the Golden Globes. While Mendes’ direction on “1917” is likely to score him a second Oscar nomination, the real star is director of photography Roger Deakins.

“1917” is their fourth collaboration and among the Oscar-winning cinematographer’s greatest achievements. That isn’t said lightly when you consider he’s been nominated 14 times for capturing stunning imagery on films like “Sicario,” “No Country For Old Men” and “The Shawshank Redemption.”

Lance Corporal Blake (Dean-Charles Chapman) drags comrade Lance Corporal Schofield (George MacKay) blindly into an assignment from General Erinmore (Colin Firth) of the 8th that will lead the two young men into the heart of battle. It’s spring 1917, northern France, and two brave men have been given the order to go through enemy lines and stop a planned advance into a trap set by the German Army.

One thousand six hundred men’s lives depend on Blake and Schofield traveling over nine miles through mud and traps, though their greatest enemy is time. Blake’s brother (Richard Madden) is among the men at the front, preparing to advance. Schofield has his own reasons to survive this mission.

The Golden Globe winner for best picture drama, “1917” is a technical marvel, so much so it can be distracting to viewers keen on figuring out “the how.” Often times how Deakins and crew are capturing a seemingly impossible shot draws your focus away from the plot and onto the craft.

This film is billed as being all “one continuous shot,” but if you know what to look for, you will quickly see past the illusion. Technically, it’s not one single shot; there are obviously cuts — more than 60, in fact — but most are seamless to the untrained eye.

The boast of a story told in “real-time” also isn’t accurate. While “1917” runs under two hours, there are more than two hours of the story told, including time spent traveling in a vehicle and a blackout. The blackout scene is the most troubling considering how much the film is selling itself on the idea of one continuous scene.

Still, these discrepancies are minor in light of the intentional difficulty in which the film is framed and executed. More emotionally compelling than “Dunkirk,” both films suffer slightly from the imbalance of technical wizardry compared to character development.

Unable to use the technique of traditional editing, Mendes and Deakins find a way to create suspense and tension within the continually moving frame. Even when there is no shooting, running or explosions, situational stress and anxiety are maintained, often more so when things are at their quietest.

Composer Thomas Newman, another frequent collaborator of Mendes’, delivers an extremely present score, giving the narrative its emotional resonance. Again, the use of silence only benefits Newman’s work when it eventually does seep into the scene.

Award buzz online for George MacKay (“Captain Fantastic,” “True History of the Kelly Gang”) is premature and unrealistic given the more compelling performances this year. MacKay’s agile performance and stunt work are impressive, but they’re also highly technical, like the film itself.

It’s a survival performance, similar in scope but not scale of Leonardo DiCaprio in “The Revenant.” “1917” borrows a few cues from Inarritu’s masterpiece that was also shot entirely in exteriors, dependent solely on natural lighting and cloud cover continuity.

It’s the type of film that demands a second viewing whether you were focused more on the story or the cinematics the first time around.

Final Thought: Mendes and Deakins have engineered an astonishing, non-traditional war film that’s equally as thrilling visually as it is narratively.