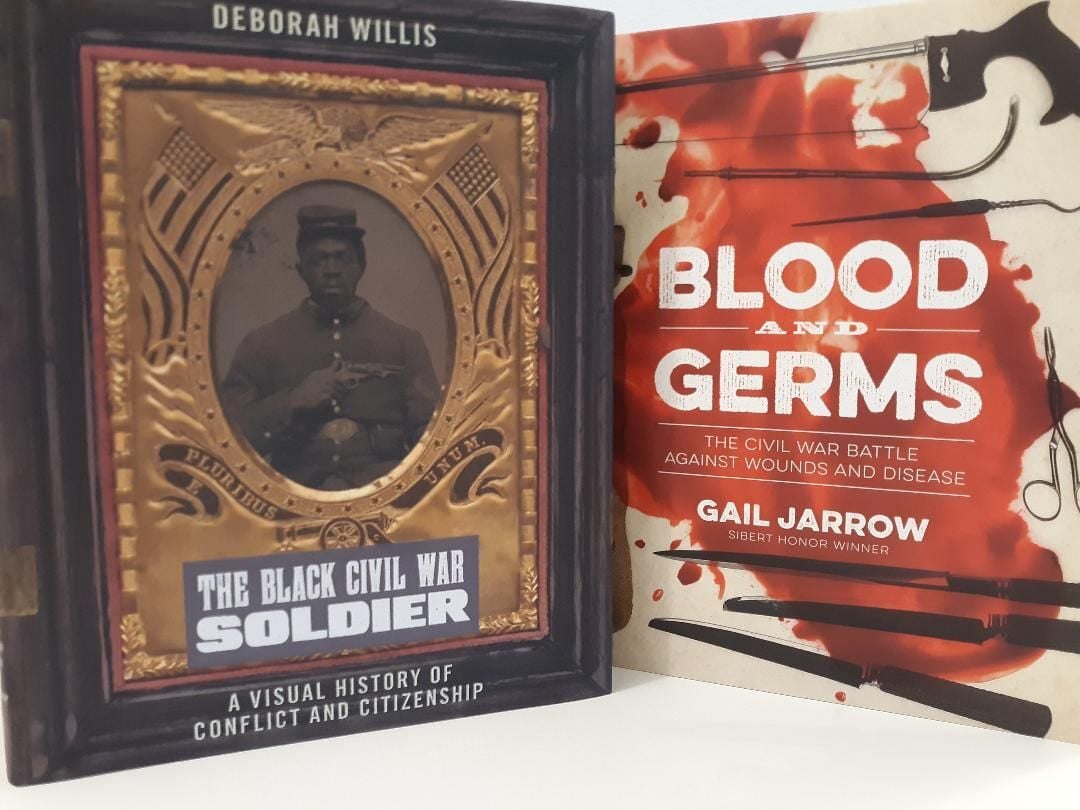 “The Black Civil War Soldier: A Visual History of Conflict and Citizenship” and “Blood and Germs: The Civil War Battle Against Wounds and Disease”

Put up your fists.

Yep, it’s come to this: Someone’s looking for a fight, and that’s exactly what they’re about to get. There will be a winner. It won’t be fun: There’ll be a loser, and probably some bruises. But at least you’ll be able to open those fists and shake hands when it’s over — unlike, perhaps, the people inside these two great books.

When the Civil War began, says author Deborah Willis, most “... enslaved blacks and servants were united in their opinion — they associated war with emancipation.” They hung onto every bit of news about Abraham Lincoln and news from the battlefront, they were eager to know what Lincoln would do next, and in “The Black Civil War Soldier,” you’ll get to meet some of those people and learn their stories.

You’ll also get to see them, in portraits and snapshots taken on and off the field, in Black hospitals, homes and asylums. These are the kinds of pictures that make you want to linger, taking in details of what was obviously someone’s best dress, or someone’s best and bravest face. Look at the pictures and read personal letters home, diary entries and thoughts — words, says Willis, of absent loved ones, fear and confusion, frustration on the part of both soldier and commander, “dignity and pride ... achievement and self-confidence ...” and valor.

You’ll also learn about the daily lives of a Black soldier during the war and what happened in the years after the war’s end. Together, this narrative and the photographs make an astounding book that show an often-little-told human side of the war between the states.

When there’s war, of course, you’ll see action on the field, but the fight also can go on far behind the lines, as you’ll see in “Blood and Germs” by Gail Jarrow.

In this heavily illustrated book, young readers will get an authentic look at what, other than bullets, bayonets and cannonballs, might’ve killed a Civil War soldier. These things — gangrene, scurvy, tuberculosis, typhus and other horrible maladies or injuries — are examined and explained in context to the times in which they affected Americans on and off the battlefield.

Many of those maladies, after all, are rare in today’s world and may be unfamiliar to young readers. Through letters and stomach-churning old-time cures, Jarrow also tells of the roles women played in nursing and ministering to the wounded and afflicted, how they stopped blood loss, saved legs and arms, ended pain and kept away disease and death.

Older teens and adults, especially those who are history buffs, are the perfect audience for “The Black Civil War Soldier,” although later middle-schoolers shouldn’t have any problem reading or understanding the book and may enjoy it. “Blood and Germs” is great for children ages 10 and older and adults, though parents of particularly sensitive children should beware that some of the photos can really be quite gruesome.

In both cases, the stories inside these books make them great additions to anyone’s library, and good things to get your fists around.