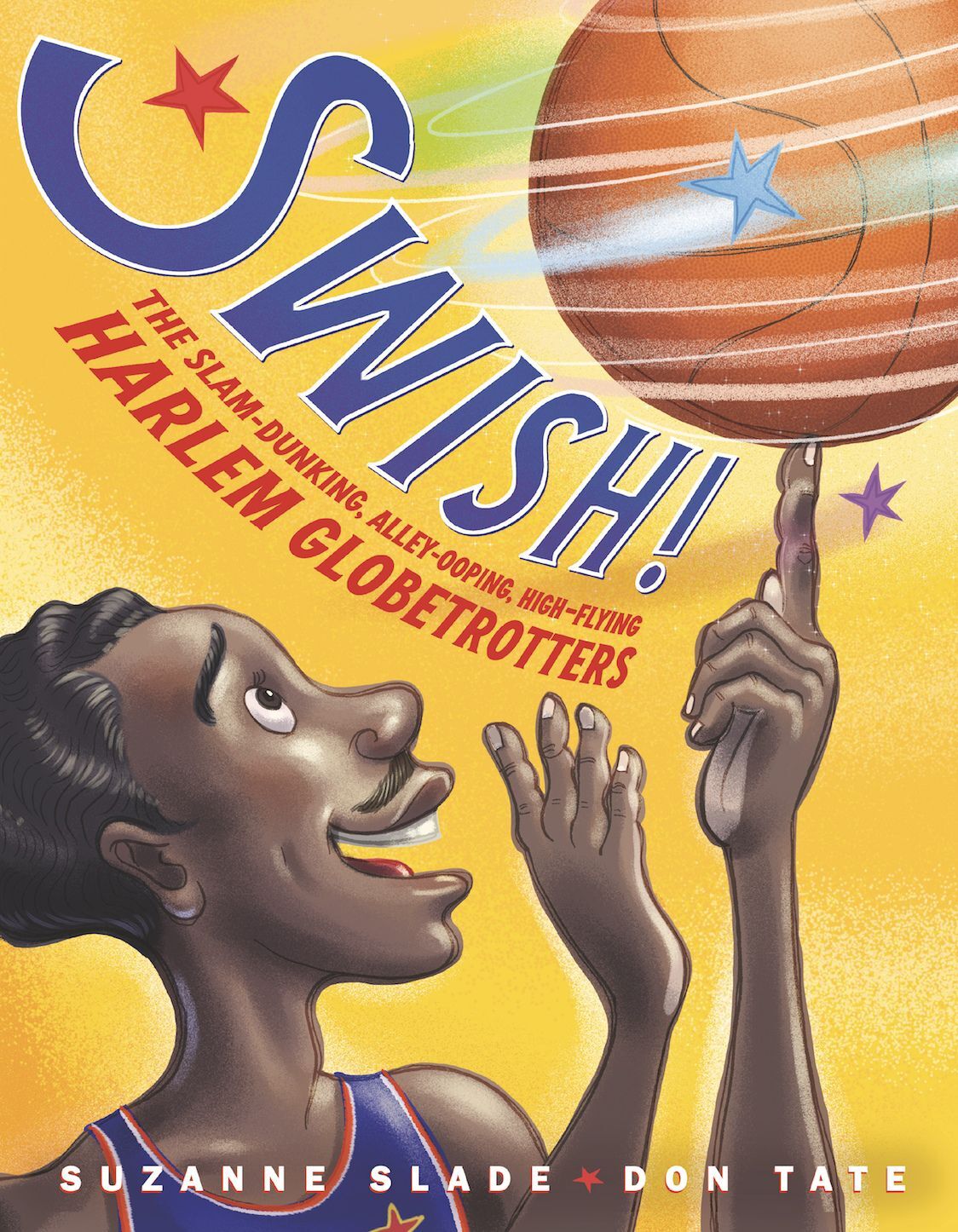 Your favorite player loves getting buckets.

And that’s good — that’s the goal of the game, after all, right? It’s called basketball because that’s what you’re supposed to do: put the ball in the basket, dunk it right in the bucket. You might need help to do that now, but practice and maybe you’ll be a pro someday. Maybe you’ll be like the players in “Swish!” by Suzanne Slade, illustrated by Don Tate.

Ka-thumpa, ka-thumpa, ka-thumpa. That’s what people heard all day, if they lived near Chicago’s south side. It was “those boys” and their basketballs, doing “nonstop layups, all-net free throws and sky-high jump shots.”

Sure, they were talented boys. Everyone knew that, but they were Black, and there weren’t many options for them, so those boys joined a traveling team, and they met Abe Saperstein. That was when things started happening: It was Saperstein’s idea to rename the team the “Harlem Globetrotters,” which made it seem like they’d dribbled everywhere around the world.

It was almost as if they already had: The team played ball nearly every night in small towns all over the country, but their style was different. Because people didn’t like seeing any Black players beat the hometown white teams, the boys had to learn new tricks. They did a “one-finger ball spinning.” They did their “rapid-fire mini dribbling.” People began to laugh, and they began to enjoy the show as the “Trotters” racked up wins.

But it wasn’t all fun: There were many places where the Globetrotters weren’t welcome. They couldn’t get a drink of water just anywhere. Some hotels turned them away. Sometimes, they weren’t allowed in restaurants.

And still, they played because they were athletes. Even when most teams in the NBA wouldn’t hire Black players, the Harlem Globetrotters were real winners on the court. They proved it by beating the Minnesota Lakers. They could beat anybody.

And then one day, “something incredible happened” ...

Everything spherical in your house can be dunked. Your 5- to 9-year-old has proven that, so what next? Well, “Swish!” will give them baskets of joy.

With the kind of quick-paced, wild fun that you get at a Harlem Globetrotters game, author Suzanne Slade brings that fast action to the page with a story of racism, perseverance and resilience. While there’s a main focus on just one generation here — roughly the Depression years through the early 1950s — Slade proceeds to show the overall evolution of the team by including a timeline and additional material.

She also briefly touches upon individual players, but not more recent ones, which may disappoint grown-ups; children whose hands are practically glued to a round, dimpled ball won’t notice that omission at all.

This narrative would be the lesser without artwork by Don Tate. Children will love his movement on the pages; adults will have difficulty not hearing “Sweet Georgia Brown” in their heads. That makes “Swish!” fun, it’s fast, and if there’s a future NBA or WNBA fan in your house, your child will love it by the buckets.