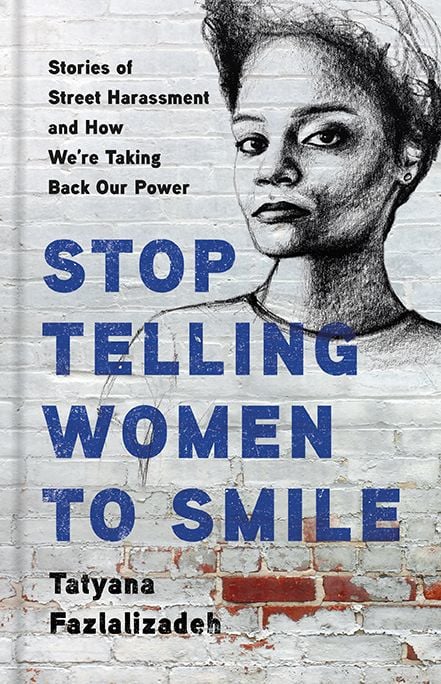 “Stop Telling Women to Smile: Stories of Street Harassment and How We’re Taking Back Our Power” by Tatyana Fazlalizadeh, 2020, Seal Press, 226 pages, $28

You look fine today, Mama, Sugar, Honey, Baby, fill-in-the-blank with names you’re called by men you don’t know. Just think, Sweetie, Pretty, you were minding your business before this monkey business started. And just know, by reading “Stop Telling Women to Smile” by Tatyana Fazlalizadeh, that others deal with it, too.

Like many women, Fazlalizadeh spent her teenage years in public “not wanting to be seen.” Catcalls, creepy comments, unwanted compliments about her young body followed her from street to sidewalk, coming from men who made her feel afraid, ashamed and definitely harassed. The “sheer quantity” of it struck her as she got older and in 2012, Fazlalizadeh, a street artist, started a movement she calls Stop Telling Women to Smile.

As part of her work, she invites women to her studio to tell their stories as she sketches their portraits. Some of her results are in this book — and they’re powerful.

The most common response to street harassment, she says, is anxiety, a lingering dread of what could happen — physical violence, stalking, emotional terror — whether one interacts with a harasser or not. For many women, harassment becomes a part of their daily lives.

Says Fazlalizadeh, men who engage androgynous women in unwanted ways “are particularly likely to harass masculine women” out of a false sense of their own masculinity; they’re also likely to harass trans women because they feel “tricked” by a trans body. Women of color receive “markedly different” harassment from white men than from men of their own races. Pregnant women receive unwelcome touches, as though they’re good-luck charms; and Muslim women are verbally attacked for their clothing.

And who can women “go to for protection” if the harasser is a police officer?

What can be done?

Fazlalizadeh said she sees hope for today’s children, who are raised learning not to harass — but beyond that, the solution “is a large question that can have many answers.”

Give yourself a minute to skim through “Stop Telling Women to Smile,” and it may seem like the book is little more than same-but-different which, after a while, is too homogeneous and overgeneralizing. Dig a little deeper, though, and this book opens like a flower with pages of emotion, outrageous tales, anger, unwarranted shame and a chapter for feminist men that could spell welcome change.

Dig a little deeper, though, and you might shudder.

Fazlalizadeh makes this book feel like a raw gallery performance, and it shouts with power but not much caution. Some of the “What Women Want to Say to Street Harassers” sidebars come off as advice, and safety isn’t stressed nearly enough there. There’s strength in Fazlalizadeh’s words and they’re stand-up-and-scream inspiring, but they just need a hair more prudence.

And yet: This is an invaluable book for any women’s group, it’s a great launching point for conversations with teens of any gender, and parents will absolutely want to read it. For that, for them, “Stop Telling Women to Smile” is worth a look-over.