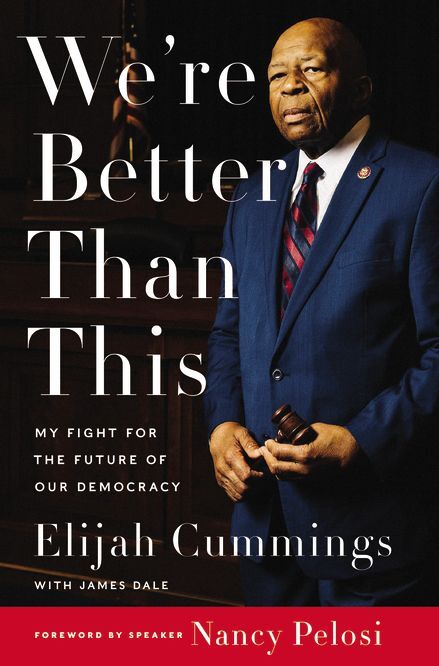 We're Better Than This

Things could always be worse.

You didn’t sleep well last night, your day started earlier than usual, and traffic, ugh; then you forgot your lunch and lost a bag of chips in a vending machine, and you never did catch up.

You had a rotten day, but look on the bright side: You’re above ground and breathing and, as in “We’re Better Than This” by Elijah Cummings with James Dale, someone had your back.

Throughout most of his life, Cummings’ parents were his guide-lights. “Neither had much education,” he wrote; they were sharecroppers who moved north so their children could have better opportunities. And they motivated Cummings to become a lawyer, civil rights worker and a Congressman. They inspired him to serve, he said and, “I believe that is why I was put on this earth.”

His service began early, but his biggest “fight... for our democracy” began in 2017, following his first meeting with the newly inaugurated president. Cummings believed that despite their fundamental differences, President Donald Trump had listened then and understood the needs of Cummings’ constituents, especially in reference to the cost of prescription drugs. Instead, Cummings’ words were dismissed and nothing happened, he wrote.

Though not the type to carry a grudge, Cummings never forgot. When he was asked to serve on the House Committee on Oversight and Reform two years later, his first thought was for the American people, and the responsibility that his position as chair of the committee demanded. The Trump administration, he said, had had no real oversight until then, and he hoped to rectify that. He still had a passion for lowering prescription drugs, but his new position demanded a broader scope.

In months to come, that would include a fight to keep important words off the 2020 Census. It included mentoring and guiding freshman representatives. And it included the groundwork for impeachment proceedings that Cummings didn’t live long enough to see.

Not just for its political implications, but for the everyday lessons inside it, “We’re Better Than This” is a book to have now.

Writing literally as he was dying, Cummings began his book with two people who appear frequently in it: his parents. From there, he sparkles as a storyteller, sharing vivid memories that are both personal and professional and that give readers a sharp sense of what drove him. This part speaks volumes about Cummings himself.

It’s hard not to be thrilled as he proceeds to his recollections of what happened while he was chair of the oversight committee: riveted as we were by it, Cummings’ account of the drama offers further behind-the-scenes peeks at, and his thoughts on, those proceedings. Wisdom, a charming ownership of his constituents, some well-deserved back-patting and an awareness of his impending death add further luster.

In his introduction, co-author Dale writes about his friendship with Cummings and about finishing this inspiring read without him. That alone is poignant; the rest is insightful; and reading “We’re Better Than This” is really the best idea.